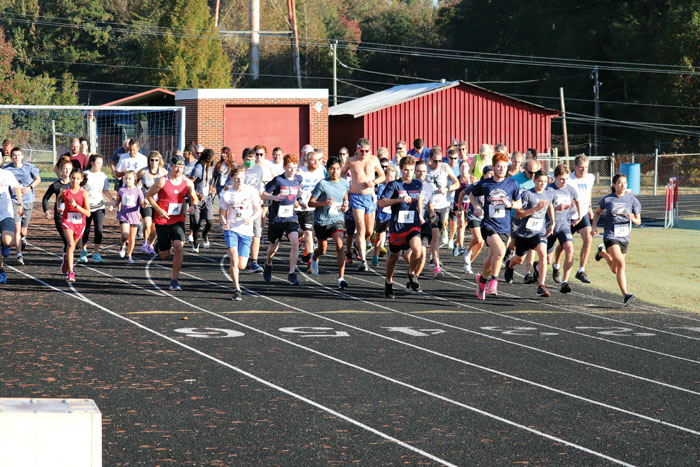 The start of the Ed Dupree Memorial 5K

Many were former Faith Flyers or the children of Faith Flyers, the famed track club that Dupree organized and coached from 1974-86.

Dupree, who wrote and edited sports for the Salisbury Post for more than three decades, carefully recorded every step he ever ran. He logged 41,093.5 miles during his lifetime.

When Dupree became ill, he asked his daughter, Allison Adams, to find a young runner who would appreciate his Garmin GPS running watch.

That runner turned out to be Thomas Ferguson, whose mother was a band teacher at Erwin Middle School and a colleague of Adams.

Dupree passed away on Nov. 21, 2017. Ferguson received Dupree’s watch not long after that.

Fittingly, Ferguson who is now 17 and East Rowan High’s top cross country runner, ran the fastest time at the event that was conducted to honor Dupree’s memory.

The leading female runner was Chloia Shea Beigay, an 11-year-old from Concord. Her mother, Andrea Stiller Beigay, was a Faith Flyer and best friends with Adams when they were growing up. They had a special connection. Their mothers were fifth-grade teachers at Faith Elementary School.

Allison’s husband, Frank Adams, a notable golfer who played in the 2016 U.S. Open, was hauling their two boys to the event on Saturday morning. He experienced a flat tire on the way to the race, but there was no delay. A helpful motorist stopped and gave everyone a ride to East Rowan. The Adams family arrived in time for the festivities.

That was fortunate. “Little Frank” Adams, age 6, broke away from the pack with a lap to go and cruised to his first career victory in the Fun Run.

It probably won’t be his last.

The “5K” course inadvertently ended up being a bit short. It turned out to be 2.85 miles instead of the standard 3.1 miles. Ferguson was clocked in 17:04, while runner-up Brayden Self, another East Rowan runner, was timed in 17:27.

Allison Adams said David Freeze is going to measure and certify the course. She hopes to hold a full 5K in November for high school cross country runners. There won’t be any charge to run. Freeze and the Salisbury Rowan Runners have offered to provide professional timing and figure places.

Saturday’s event raised about $2,400 that will be split between the Novant Health Foundation and the Ed Dupree Memorial Scholarship that is given at East Rowan.

Some who couldn’t run or walk on Saturday contributed via donations and door prizes. All in all, it was a beautiful day.

“I think Dad was definitely looking out for us,” Adams said. “I’m sure Dad was beaming with pride when he saw all his former Faith Flyers coming out to show their support, running and walking. He would have also been so very excited at the group of young people who came to race.”