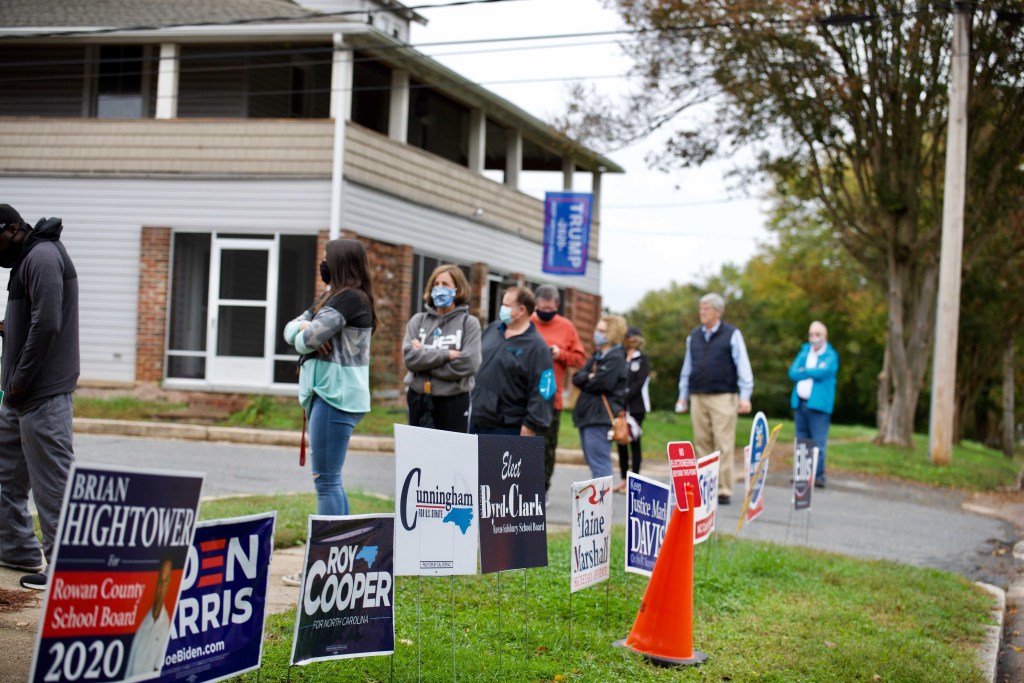 SPENCER — Voters taking advantage of the second Sunday of early voting said they were particularly excited about the presidential race.

When polls closed on Sunday afternoon, 30,184, or 31.19% of the county’s registered voters had cast their ballots via one-stop early voting. The state said there were an additional 8,240 absentee by mail ballots cast in Rowan by Sunday morning, meaning that at least 38,424 of the county’s nearly 97,000 voters have already turned out for the election.

The county saw similar numbers of voters turning out on both days during the weekend, despite the rainy weather all day Sunday. Early voting has been at its height during the week. All told, there were 19,905 one-stop ballots total cast from Monday, Oct. 19, to Sunday.

There are a long list of candidates on the ballot for state, local and federal positions ranging from the Rowan-Salisbury Board of Education to the presidency, and voters said they are most interested in the latter.

Voters, mostly masked, were lined up out the door at the Spencer municipal building on Sunday in spite of the weather.

Gwen Walker said said she is most interested in the presidential race because she wants a new president. Walker said she has been waiting through four years of President Donald Trump’s term for the chance to vote against him.

“All of it,” Walker said. “It’s just irrational on his part.”

Walker said she is a motivated voter and votes in every election, but the big race was her main motivation this year.

Mark Brandt said he wants Trump to win because he is a construction worker and has benefited from the administration.

“We kept working,” he said.

Brandt pointed to the expansion of Egger Wood Products across the Yadkin River in Davidson County as an example of economic success during Trump’s term.

By contrast, Hyatt Grissom said he is not excited about any races and described the election as a disappointing and personality-driven cycle.

Grissom said he leans libertarian, but feels voting that way is often throwing a vote away. He said that the ballot he cast Monday included a mixture of candidates from different parties.

Grissom is a social studies teacher and watches presidential debates for himself and for class. He said the first debate was “awful “and sticks out as how they should not happen. He said the second was better, but neither was great.

One-stop voting will continue until Saturday. Anyone who lives in Rowan County and did not register ahead of time by the deadline can register at a polling site during early voting.

Political Notebook: Rowan Board of Elections receives more than…