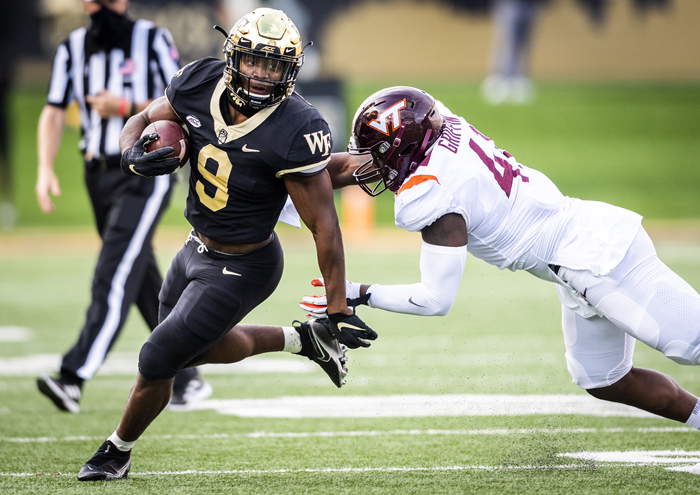 After the game, Andersen was atop the shoulders of teammates chanting “scholly! scholly!” (scholarship) and “Rudy! Rudy!” (from the movie) as they carried him off the field. A few minutes later, Andersen was treated for a bloody cut on his chin.

“Just a little glue here on the chin,” said Andersen, a Virginia native. “No biggie.”

“That kid’s the definition of a Wake Forest football player,” Wake quarterback Sam Hartman said pointing out Andersen’s grittiness and determination. “When guys like that make plays, it really makes you excited. The kid’s a warrior, he’s a battler.”

After the game, Wake coach Dave Clawson mentioned that Andersen might receive the first scholarship that becomes “available.” “We’re definitely taking care of that next semester.”

Listed as a co-starter on the pre-game depth chart, Andersen already had captured admiration from Hartman, who joked he played a role in Anderson’s ascension up the depth chart by throwing him interceptions in practice.

Beal-Smith set the tone for the Demon Deacons (3-2, 2-2 Atlantic Coast Conference) with a 58-yard run on the game’s first series. He later added runs of 26 and 19 yards.

Hartman threw only 17 times Saturday, completing 12 for 110 yards. But he scrambled 9 yards for the game’s first score.

Hendon Hooker threw for 223 yards and ran for another 98 for the Hokies (3-2, 3-2), who had won six of the previous seven games between the schools.

Hooker completed 17 of 33 passes and rushed 17 times. He connected with James Mitchell on a 39-yard TD pass.

“They (the Deacons) play a bit of a bend-but-don’t-break defense, but they challenged us more on the outside and we didn’t make any big plays throwing the ball,” Tech coach Justin Fuente said. “We weren’t very effective down there.”

Sam Johnson made a 54-yard field goal to pull the Hokies within a touchdown with 2:38 left, but the Deacons recovered an onside kick and later punted to pin the Hokies deep with a less than a minute to play, setting the stage for Andersen’s third interception.

The Hokies gave up big running plays and were unable to mount a consistent passing attack. A season that looked promising after last week’s rout of Boston College, needs a victory at Louisville next week to get back on track.

Following a home sweep of Virginia and Virginia Tech in back-to-back weeks, the resurgent Deacons ride momentum into their second road game of the year at Syracuse.

Known for special play magic under former coach Frank Beamer, Tech pulled off a successful fake punt in the third quarter and seemed to have seized momentum. On fourth and 4 from the Tech 29, punter Oscar Bradburn raced 14 yards around right end for a first down. Two plays later, a personal foul moved the ball to the Wake 37. But Andersen’s interception of an overthrown pass ended the drive.