Political Notebook: Rowan Board of Elections receives more than 60,000 pens for voters 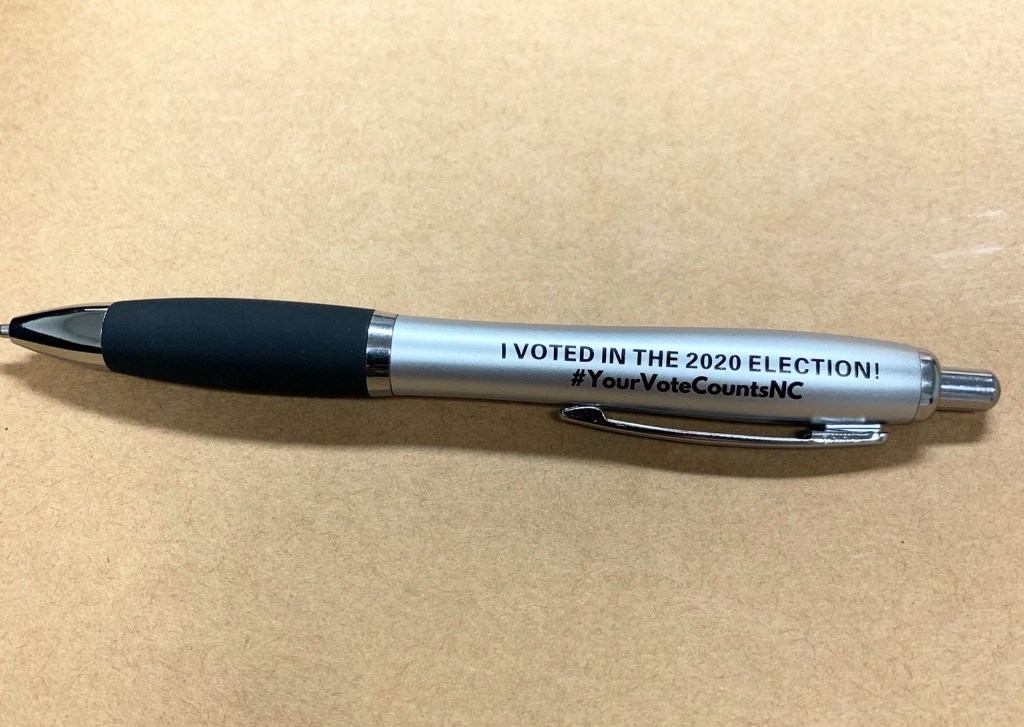 This is one of the pens voters will receive after casting their ballot.

SALISBURY — Early voters can now expect to receive their own 2020 election writing pen after casting their votes at one of the county’s five early voting locations.

Rowan County Board of Elections Director Brenda McCubbins said the county finally received its shipment of more than 60,000 pens late Tuesday afternoon. In previous years, voters could take a sticker to commemorate their participation in the nation’s democracy. But due to COVID-19 concerns and the requirement to add personal protective equipment at voting locations, the State Board of Elections purchased pens instead of stickers.

McCubbins said, while many voters weren’t aware of the pens in place of stickers this year, they had been asking about the stickers at local voting locations.

Voters now will be handed a pen before completing their ballot. Until the shipment of pens from the state came in, the Rowan County Board of Elections had to purchase their own pens to get started. Voters had to turn in their pen before leaving, and election officials had to sanitize each pen before distributing it to a new voter.

Those who return absentee ballots at the Rowan County Board of Elections will also receive a pen, she said.

Unfortunately, voters who cast a vote before the pens were available won’t be able to receive one. But she added elections officials didn’t distribute stickers to voters who didn’t receive them in past elections either.

If any pens are left over, McCubbins said she expects to use them for future elections even though they have 2020 on them. That’s because purchasing pens is one of the Rowan County Board of Elections’ responsibility prior to elections.

SALISBURY — Election officials are reminding locals that, as six days of early voting remains, there are limited opportunities to register and vote in the 2020 election.

Rowan County Board of Elections Director Brenda McCubbins said the county has seen many same-day registrations completed at the five early voting locations. She added that some voters believed they had registered online with the DMV, but it had either been submitted after the deadline of Oct. 9 or the Rowan County Board of Elections didn’t receive the registration in time.

“We should encourage everyone to check their registration if they are planning to vote and not wait until election day, which is too late to register,” she said.

To register under the same-day provision at early voting locations, the person must be a U.S. citizen, be at least 18 years old on or before Nov. 3, not be currently serving a felony sentence or probation or parole and live within the county for at least 30 days prior to Nov. 3.

Same-day voter applicants will be asked to provide election officials with proof of residence, which can include a North Carolina driver’s license, a government-issued photo identification or a current bank statement, utility bill, government check, paycheck or any other governmental document that shows the voter’s address. Other acceptable forms include public transportation authority cards, documents issued by any government shelter, a school photo ID from a college or university, public housing ID card, drug prescription issued by a government doctor or other governmental health care provider or public assistance or disability agency documents.

A person who registers to vote under the same-day registration provision must vote a ballot immediately after registering. But if a voter declines to vote immediately, their registration will still be processed and they may later return to an early voting site in the county. Early voting lasts until 3 p.m. on Oct. 31.

Within two business days of a voter’s same-day registration, the Rowan County Board of Elections will verify the North Carolina driver’s license/ID or Social Security number, update the statewide registration database and search for possible duplicate registrations in the county. In addition, the Rowan County Board of Elections must verify the voter’s address by mail by sending them a verification mailing, which is a North Carolina voter registration card. The ballot will be counted unless the county board determines that someone is not qualified to vote in accordance with North Carolina law.

In the event the Rowan County Board of Elections cannot verify an address, that voter registration application will be denied and the absentee vote may be subject to challenge. If challenged, a voter will receive an appropriate notice. The notice will provide instructions on how to appeal the challenge.

It’s encouraged for locals to check the status of their voter registration within two business days by visiting ncsbe.gov or calling 866-522-4723.

State Board of Elections launches voting portal for voters who are blind, visually impaired

The portal can be found at votebymail.ncsbe.gov/app/home. The deadline to request an absentee ballot is Oct. 27 by 5 p.m.

“The portal makes it easy for voters who are visually impaired to privately and independently mark their ballots,” said Karen Brinson Bell, executive director of the State Board of Elections.

After the ballot request is submitted, it may take several days for the county to process the request. The county board will send the voter an email to let the voter know when their ballot is available in the portal, and then the voter can access the ballot online.

Though one witness is required when voting absentee, that requirement is completed for voters who are blind or visually impaired requesting an accessible absentee ballot.

The deadline to vote and return absentee ballots is by 5 p.m. on Nov. 3.

RALEIGH — North Carolina Asian Americans Together has launched a multilingual hotline in a number of Asian languages to help Asian communities better understand voting rules and combat the spread of misinformation as voting for the 2020 election is underway.

The organization reports that language barriers continue to be an issue facing Asian North Carolinians in regards to voting. It reports that 70% of the Asian-Americans in the state speak a language besides English at home, with 42% whom speak English less than “very well.” And according to a national 2012 post-election survey, voter turnout was lower among voters who speak limited English by 9 percentage points compared to English-speaking voters.

“Even for many members of our communities who are proficient enough in English, complexities and changes in election rules on the state level can be hard to explain in someone’s non-primary language,” said NCAAT Executive Director Chavi Koneru. “By providing a multilingual voter assistance hotline and in-language resources on our website and at in-person events, we hope to make the voting process more accessible to our communities across generations.”

Voter information for Asian communities can be found by visiting http://ncaatogether.org/vote or by calling 919-591-2442. The information is translated for voters who speak Hindi, Urdu, Vietnamese, Korean, Hmong or Chinese. The information includes multilingual voter assistance and in-language videos to help voters with instructions on completing an absentee ballot.

Ricky Leung, the senior director of programs for NCAAT, said 33% of Asian-Americans living in North Carolina’s four major urban counties reported themselves as “Limited English Proficient,” and that Asian-American and Pacific Islander voters in the state are more motivated to vote in this election than ever before but continue to be skeptical of voting by mail.