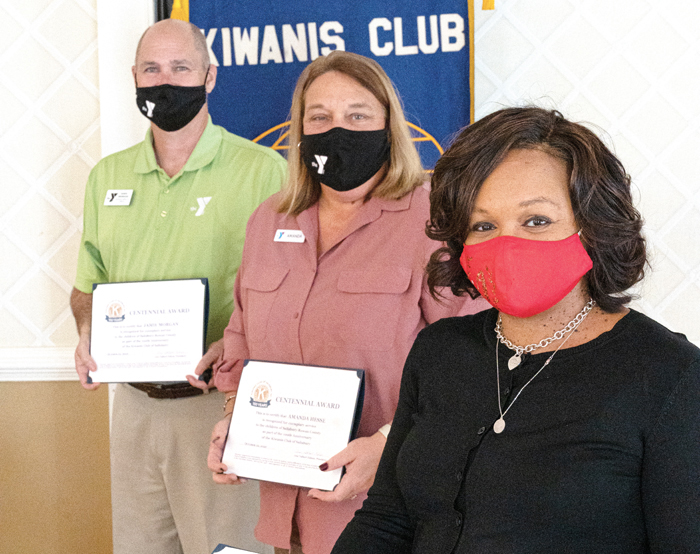 SALISBURY — This year hasn’t quite been the centennial the Kiwanis Club of Salisbury hoped for, but its members got back to business Friday when honoring five individuals with a Centennial Award.

Before the pandemic, the club had named nearly 20 locals winners of the Centennial Award — given to those who embody the club’s motto of being an “organization of volunteers dedicated to improving the world, one child and one community at a time.” The latest honorees included Theodore Brown, Alex Clark and Alisha Byrd-Clark, Amanda Hesse and Jamie Morgan. Four of the five were present for Friday’s presentation.

During a short speech, Byrd-Clark spoke about her late husband Clark’s passion for providing a holistic experience for children. Together, they founded companion mentorship programs Gemstones and COMPASS. Gemstones focused on girls and young women. COMPASS offered programs to boys and young men. Clark lost his battle with Lou Gehrig’s Disease, commonly known as ALS, in February.

“One of the quotes that he said was ‘The biggest commitment is being committed to the commitment,’ and so I carry that with me every day because I know if he were here he would still be committed to our children, to our youth,” Byrd-Clark said. “He gave me a torch to carry and I will continue to do the work that he and I have done together.”

Also among those honored Friday were:

• Amanda Hesse, the director of the Saleeby-Fisher YMCA. She started her career at the YMCA in 1993 as a part-time staff member at the old Salisbury YMCA. Her nomination stated that there was a common goal in creating the East Rowan YMCA — one that Hesse shared — to “provide the full YMCA experience to the East Rowan community, and I can say that the facility that was built there certainly has done so every since the doors opened back in 2001.”

• Jamie Morgan, the CEO of the Rowan-Cabarrus YMCA, who also started his career as a part-time staff member. At the age of 13, he kept score for industrial league basketball games. He taught math for a time at South Rowan High School, but was recruited back to the YMCA in 1992 and helped build the facility in China Grove. He became the CEO of the Rowan County YMCA organization in 2000 before a recent merger with the Cabarrus County organization. In addition to helping build the Saleeby-Fisher YMCA, he played a major role in the capital campaign for the J.F. Hurley Family YMCA in Salisbury.

• Theodore B. Brown, whose suggestion to raise money to send children to an orthopedic hospital for treatment blossomed into the club’s passion for helping children. That suggestion came in 1922 after the head of the state orthopedic hospital came to Salisbury to tell people about the availability of corrective surgeries for crippled children. After several weeks without anyone following up on the opportunity, Brown said the club should undertake the fundraising project that would send 104 local children to receive surgeries. Brown was also a local businessman and involved with the chartering of the Rowan County Chamber of Commerce.