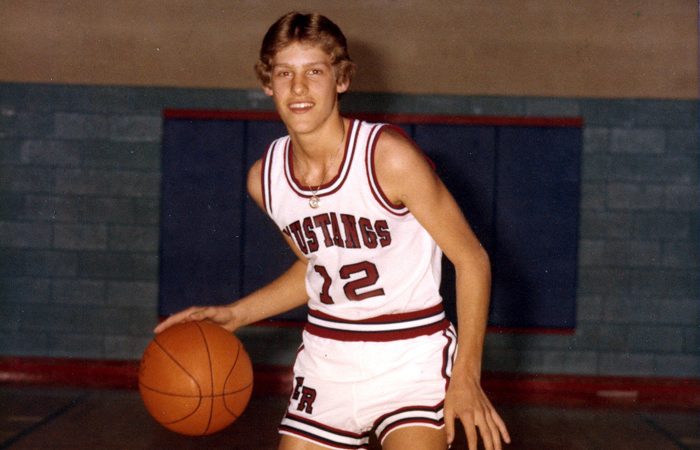 Doug Gobble, seen in his East Rowan playing days, was just 19 when he was killed in an accident at home in 1984. (submitted photo)

CHINA GROVE – It was December 1981, and East Rowan senior Doug Gobble had himself quite a week on the basketball court.

No 3-point line was marked on the floor yet, but he was a splendid outside shooter and he nailed the shot in the final seconds that sent the Mustangs’ game in Wadesboro to overtime.

A few days later he swished the shot from deep in the corner with nine seconds left that lifted the Mustangs to a road victory against the talented A.L. Brown squad that would edge East and Wadesboro’s Bowman High for the South Piedmont Conference title.

Gobble, a Granite Quarry youngster who was 17 then, had everything going for him. Athletic, smart and personable, he was the All-American boy.

He was first team All-Rowan County twice as one of the leaders of strong East teams and All-SPC as a senior when he averaged 11.4 points per game.  His release was quick and his aim was true. He could get hot from outside in a hurry. There was a game against Northwest Cabarrus when he had to sit with foul trouble most of the first half, but he scored 16 of his 20 points in the second half.

Charles Schoderbek, East’s head coach then, said Gobble was the best shooter he’d ever coached, but he was too unselfish. Schoderbek had to remind him daily to shoot more.

In baseball, Gobble was a third baseman, Not bad with the bat, outstanding with the glove.

Even opponents liked Gobble. He was good with people and had friends all over the county through church, basketball and baseball. He had a gift for making everyone he came in contact with feel special, and he surrounded himself with great friends.

“If you knew Doug, you liked him,” Jay Hill said. “He was a really good athlete, but he was more than that. He was a super guy.”

In January 1984, Gobble was gone at 19. Killed in an accident. The youngest of four siblings, he was a sophomore at UNC Charlotte.

Assistant basketball coach Rick Roseman talked about how Gobble had impacted as many people in his 19 years as most people did in a long life.

Plans were put in place to keep his memory alive through a Doug Gobble Memorial Scholarship. That scholarship would go to an East Rowan baseball or basketball player.

Gobble’s broken-hearted family made the short trips to East to hand out the scholarship the first few years, but it was hard for them.

In 1989, Curt Thomas, one of Gobble’s best friends, got the Doug Gobble Memorial Golf Tournament, started.  The tournament became the primary fundraiser to keep the scholarships flowing.

There have been ups and downs over the years, but the tournament always survived and usually thrived. There was always a scholarship — or scholarships — at the end of the school year for boys and girls headed to higher education.

Students fill out applications through the guidance counselors, and Thomas and Hill help evaluate the most deserving students. It’s generally been East students who receive the scholarships, although Carson’s Jordanna Clark, headed to UNC as a journalism student, was an exception to that rule a few years ago.

“There were some down times for the tournament, I believe we were down to seven groups one year, but even in those down times, there were always donations and sponsors, and classmates ready to jump in to help,” Thomas said. “So many people knew Doug and remembered him and wanted to help. The tournament always has been a very good thing.”

The tournament got a boost about a decade ago when Jay Hill, a golf professional,  moved back to the area. Hill had known Gobble and Thomas well when they were youngsters, but Hill’s family had moved away when he was an eight-grader. He had stayed friends with Gobble because Gobble tended to make friends that lasted.

“When I moved back to Rowan County, the Doug Gobble Memorial Tournament gave me a chance to reconnect with Curt Thomas and with so many other great people and great friends,” Hill said. ” I’ve got some contacts from my time in golf that have helped some. The tournament has been a lot of fun, and it’s been a great way to keep Doug’s memory alive.”

The golfers who annually play in the tournament have become close to the Gobble family over the years. Many served as pall bearers when Gobble’s mother, Evelyn, passed away in 2018.

On Oct. 17, Warrior Golf Club was host for this year’s tournament, which featured four-player teams and a Captain’s Choice format.

The standard fundraisers — tee busters and mulligans — attracted some dollars. There also was a half-and-half drawing and prizes for closest to the pin on the par 3s and more prizes for the top placers.

“More sponsors meant more prizes, and Brian Lee, Andrew Beaver, all the guys at the Warrior did a tremendous job of promoting this tournament,” Hill said.

Hill and Thomas agreed it was the biggest and best Doug Gobble Memorial Tournament there’s ever been.

The highlight for both of them, as always, was always reconnecting with Gobble’s siblings.

There’s also a youngster to help carry on Doug’s name. Michelle Leonard Monk, the former Salisbury High tennis star who is the daughter of Richard and Karen Gobble Leonard, has a boy named Liam Douglas Monk. He was at the tournament.

By Hill’s count, 119 golfers competed at Warrior. Thirty-four groups signed up, so even more than 119 made a donation or a contribution.

“By far the biggest event since I’ve been a part of it,” Hill said. ” A lot of the thanks goes to the good Lord for giving us a great day for golf.”

Players came from well outside Rowan and Cabarrus. They came from Greensboro, Winston-Salem and Clover, S.C.

Thomas said $4,000 was raised, more than double the proceeds in a standard year.

It will go toward $500 scholarships. More young people will get help for college because people still remember Doug Gobble.

Not just for those long jump shots, but because he made them feel special.

“This golf tournament and these scholarships, this is a wonderful thing,” Hill said.