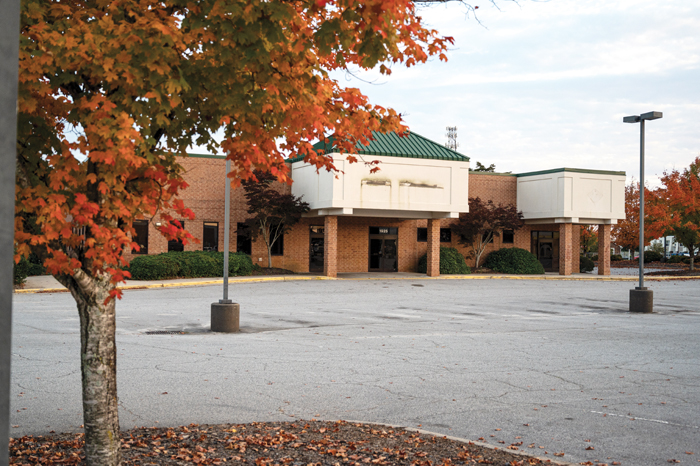 Josh Bergeron / Salisbury Post - The former K&W Cafeteria building at West End Plaza is largely devoid of any signage noting that it formerly housed the restaurant. County commissioners are now considering a lease for a new tenant.

SALISBURY — A new restaurant could be on its way into the former home of K&W Cafeteria at the West End Plaza.

At a special meeting on Tuesday, the Rowan County Board of Commissioners will consider a lease agreement for Perkins Cafeteria to be the building’s newest tenant.

Perkins Cafeteria, a new venture from Charlotte-based Perkins Management Group, would move into the location only a few months after Salisbury’s K&W was one of several locations to close its doors amid the company’s financial troubles. K&W filed for Chapter 11 bankruptcy in early September and closed at least six of its locations, including the Salisbury site that had been in operation for almost 20 years.

Like its predecessor, Perkins Cafeteria plans on serving southern-style cooking, said Jahlil Lord, who has served as a liaison between Perkins Management Services during its discussions with Rowan County.

Although the county did not actively advertise that the building was available for lease, Lord said he had been monitoring the property due to K&W’s struggles and was ready to seize the opportunity when the building opened up. Lord said that Perkins Management Services was interested in this specific location for several reasons, including a built-in customer base and Rowan County’s potential for growth.

“I believe there is potential here and the outlook is very diverse,” Lord said. “You have the Veteran’s Affairs, you have local residencies and Charlotte is growing so big and so are the outside counties and cities.”

The fact that the building comes equipped with a commercial kitchen, a large amount of seating space and is only a few weeks removed from housing a similar restaurant was also a major factor.

“For it to be a turnkey was definitely desirable and it really makes for a smooth transition for Perkins Management,” Lord said.

With the building being designed specifically for a cafeteria-style restaurant, County Attorney Jay Dees said that it’s good that the county may be able to secure a tenant who will utilize it well.

Rowan County Manager Aaron Church said that he was pleased that the county has the opportunity to fill the vacant building with a new tenant so soon after K&W closed.

“I’m grateful that Perkins Cafeteria reached out,” Church said. “It’s a good thing for the county because that building will remain leased and in use.”

Commissioner Mike Caskey said that he’s glad that the building might not be “sitting empty” for long. He also indicated that the company’s interest in the space could be a good economic indicator.

“Usually you hear about restaurants closing and not new ones opening. It makes me think that this company is in a good position if they’re able to make some moves during COVID when maybe some of their competitors aren’t able to,” Caskey said. “I hope it’s a sign that we’re starting to turn the corner economically from this.”

Having a rent-paying tenant is another benefit for the county.

“It’s very helpful,” Caskey said. “Those funds help the overall operations of the property, the power bill and water bill. Having that come through should be a big help for us.”

If the lease agreement is approved by commissioners, Lord said Perkins Cafeteria could open within the next four to five months, but it will depend on the current state of the kitchen and building and how much work needs to be done to prepare it for the new restaurant.

More information about Perkins Management Services can be found at perkinsusa.com.