SALISBURY — A 23-year-old Kannapolis was out of the hospital and in jail Thursday morning on felony charges related to a Wednesday incident in which he was shot by law enforcement officers while allegedly trying to evade arrest.

Tyler Landen Gambrell, of the 1400 block of McBeth Drive, was charged with two counts of felony assault with a deadly weapon on a law enforcement officer, one count felony assault with a deadly weapon inflicting serious injury, misdemeanor possession of a controlled substance schedule II, misdemeanor possession of a schedule III substance, speeding and felony fleeing to elude arrest and two counts of misdemeanor resist, obstruct, delay an officer. 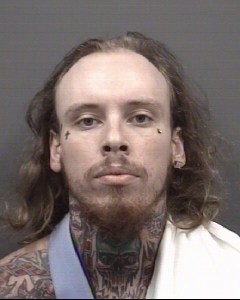 Gambrell remains in the Rowan County Detention Center under a $500,000 secured bond.

The incident in which he’s charged began around 2 a.m. Wednesday when a sheriff’s deputy conducted a vehicle stop on U.S. 601 near the Volonte Motel and in the Franklin community on a white Ford Mustang. The officer requested a K-9 to walk around the car.

The dog alerted and the deputies asked the driver and passenger to exit the car. The driver, Gambrell, took off with the deputies Kevin Holshouser and Matt Shoemaker, partially inside the vehicle.

Holshouser fired his gun into the vehicle and struck Gambrell in the arm. Both deputies were able to free themselves and call for assistance. A vehicle pursuit began and continued onto Interstate 85.

Salisbury Police and China Grove Police departments assisted in the pursuit. A China Grove officer was able to deploy stop sticks and flatten all four tires of the vehicle. The vehicle came to a stop in the median at the Peach Orchard Road exit.

Maj. John Sifford said Gambrell was in possession of oxycodone and Percocet. He also allegedly possessed a small amount of marijuana and a white powder substance. The powder substance has been submitted for testing.

“There will most likely be additional charges on this suspect once it can be determined what the white powder is,” Sifford said.

Gambrell is scheduled for a first court appearance on Friday.