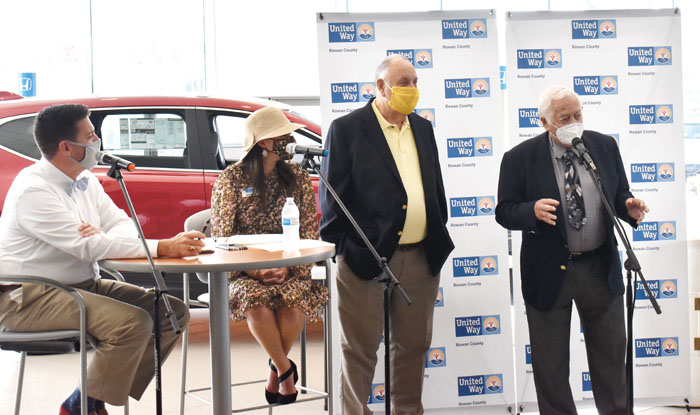 Andrew Smith and Jenny Lee look on as Cary Grant announces a donation to the United Way in honor of Gerry Wood, who Grant praised for his support of community organizations. Ben Stansell/Salisbury Post

SALISBURY — At a little over halfway through its 2020 fundraising campaign, the Rowan County United Way is right where it should be.

During a meeting on Wednesday afternoon at Gerry Wood Honda, United Way Executive Director Jenny Lee and Campaign Chair Andrew Smith announced that the campaign has raised $774,291.92 so far, which is 51.6% of the way to the total goal of $1.5 million.

While Smith said that he was pleased with the progress that’s been made, he encouraged fundraisers to remain focused as the campaign enters its homestretch.

“We know that the last quarter of this thing, it’s kind of like the fourth quarter as we move into it, is where the real rubber meets the road,” Smith said. “We can’t give up now. We’re over halfway there, but that last little bit is always a challenge.”

At the previous report meeting on Oct. 7, the campaign was 43.3% to its total goal after raising $649,227.39. Two of the divisions that made major progress since then are the “presidents” division headed by Salisbury Utilities Director Jim Behmer, which is now 40.5% to its individual goal, and the “commercial two” division led by Commissioner Jim Greene, which is 88.6% to its goal after raising $55,847.62.

Carol Ann Houpe, who leads the “education” division, was proud to announce that her division is 70% of the way to its goal despite challenges presented by COVID-19. Houpe said that Salisbury High School has raised more than $7,000 by itself.

The United Way campaign received a special donation during the report meeting when local Realtor Cary Grant approached the microphone and pledged $3,000 in honor of several people, including Gerry Wood, who hosted the report meeting at his Honda dealership. Grant praised Wood for his support of the Rowan County community. A native of Wales in the United Kingdom, Wood relocated to Rowan County decades ago after living in Toronto for several years.

“He’s been able to help everything within his power with several clubs and organizations and also with the promotion he’s done here in his business,” Grant said.

Grant’s donation will be counted and reported with the new total at the next report meeting in two weeks.

At each report meeting, Lee and Smith have highlighted the United Way’s community investment partners — 19 local organizations that fall into one of four “community needs” categories. Community investment partners that promote healthy lifestyles were emphasized at the report meeting Wednesday. Hope Oliphant, the executive director of Main Street Marketplace and Meeting Place, gave an update on the organization’s plan to implement a hydroponic garden that will serve the China Grove community.

“One of the things that we’ve heard over and over again from people is that, while they receive food stamps, they can’t always afford fresh, affordable foods. They mostly can buy processed foods that make their money go further,” Oliphant said. “This is an opportunity for us in our market to be able to sell produce at a very low, affordable price.”

Soon, the market will begin growing lettuce, herbs and micro-greens using the hydroponic system. Those fresh vegetables will be available to families in need.

“I’m grateful for United Way. This would never be possible without them understanding our vision for this,” said Madison Ellenburg, who oversees marketing for Main Street Marketplace and Meeting Place.

Throughout this week, United Way has representatives fundraising at Freightliner. The success of that effort could be critical to the campaign’s overall success, Smith said.

Smith said that he thinks “a lot will happen” with the campaign in the next two weeks. The final report meeting will be held on Nov. 4 at Cloninger Toyota and the campaign will conclude on Nov. 13.