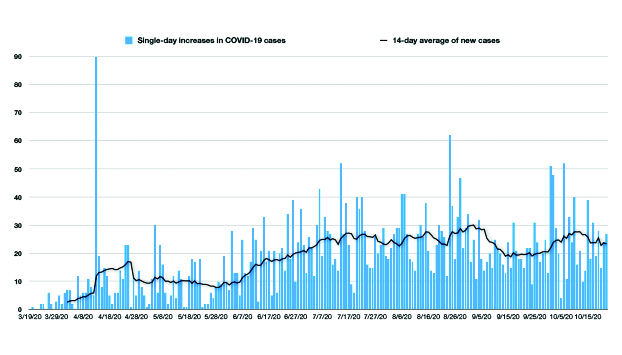 This chart shows the progression of COVID-19 cases in Rowan County with the blue bars showing daily increases and the black line showing a rolling two-week average of cases.

SALISBURY — County health officials on Thursday reported three deaths among residents not associated with a congregate care facility, bringing the total to 114 deaths since March.

As COVID-19 cases and hospitalizations continue to surge across the state, the county’s rate of tests returning positive continues to hover above 7%.

Thursday’s update showed 7.67% of the 52,036 tests reported in Rowan County have returned positive, which means 48,047 tests have returned negative. Health officials and experts advise that rate be no more than 5%, but the county’s rate has slightly declined each week when negative data has been added. In late September, the rate was slightly more than 8%.

The county also provides a weekly update on hospital beds and ventilators being used for COVID-19 patients based on what local hospitals are reporting, which can include out-of-county patients who seek care here. This week, the county reports 51 of the 106 available hospital beds are being used for COVID-19 patients, while two of the 61 available ventilators are currently in use.

As cases and hospitalizations continue to rise across the state, Gov. Roy Cooper announced Wednesday that the state would remain in phase three for at least three more weeks. After 2,400 new cases were added to the state’s total on Thursday, there are 252,992 confirmed cases of COVID-19 from 3.72 million completed tests, which amounts to a 5.9% rate of tests returning positive.

A total of 1,205 patients are currently being hospitalized for COVID-19, with 130 of those admitted within the last 24 hours. Additionally, 4,082 people have died of COVID-19 in North Carolina.

Of the 3,989 cases reported in Rowan County since March, 494 are currently positive and 3,353 have recovered. The average age among the cases is 43.8, while the average age of hospitalizations and deaths are 64 and 80, respectively.