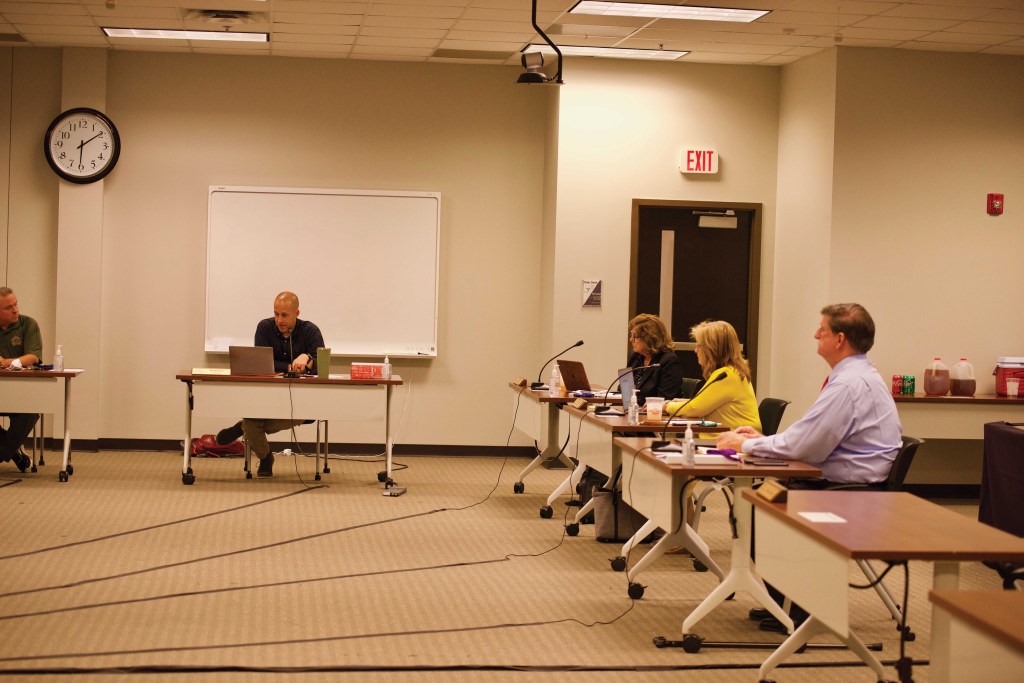 Carl Blankenship/Salisbury Post - Rowan-Salisbury Schools Board Chair Kevin Jones speaking during the public hearing. Jones asked for written comments to be read aloud, noting no one had signed up to speak to the board.

SALISBURY — No one from the public spoke during a public hearing on the closure of Faith Elementary School on Monday evening. The meeting lasted less than 10 minutes.

In light of the lack of verbal comments, Board Chair Kevin Jones asked written comments to be read by clerk Sonya Mulkey. Jones said the board would accept more public comments on the issue for the next 24 hours and take them into consideration. The board will make a final decision on closure at a follow-up meeting.

Janna Griggs, owner of Saving Grace Farm, said she is in favor of closing the school.

Gloria Ann Wilhelm, George’s sister, also said she supports closing the school, even though she was a student there from first to eighth grade and spent the last six years of her career as assistant principal there.

Gloria Wilhelm said she rallied against the closing of Faith Elementary 18 months ago.

Tim Williams, former mayor of Faith, said sending his comment was one of the most difficult things he has faced in his lifetime.

“The irony in what I am about to say kills me!” Williams wrote. “I am not opposed to Faith School closing.”

George Wilhelm’s comment was the shortest of the four.

“After many years of trying to keep Faith Elementary School open, I now concede, and no longer oppose the closing of the school,” he wrote.

Susan Cox said she heard the sadness in the comments and that she was sorry the board feels the need to take this action.

“I am saddened as well,” Cox said.

Closure hearings in the past have drawn widespread attention and community backlash. A closure hearing on Faith was canceled in March of 2019.

After the meeting, Jones said he was somewhat surprised, but he thinks people this time have a better understanding of what the board is doing and see some alternatives.

District administration estimate it would save at least $500,000 per school it closes. The district faces declining enrollment.

“I’m a little surprised, but not shocked because we’ve been talking about it for so long,” said Superintendent Lynn Moody.

The district receives funding per-student, and expenses at its facilities remain the same (or even increase for aging buildings) as enrollment drops. The district had about 5,000 empty seats against a total enrollment of 19,000 at the beginning of 2020, but the number of empty seats is increasing. The district currently serves about 18,500 students. For at least this school year, about 2,700 students are enrolled at Summit Virtual Academy. Some high school students are enrolled virtually as well.

The K-8 and virtual high school options are expected to stick around as permanent options after the COVID-19 pandemic wanes, though they may draw fewer students.

George Wilhelm said the Faith Academy board felt it should tell the district they like the school but concede to the district.

The academy will go before the state Board of Education in December for final approval of its charter. The fate of Faith Elementary has been a point of discussion during the academy’s two interviews with the Charter School Advisory Board. The academy plans to begin by serving students K-7 and eventually operate as a K-12.

Now that RSS has held the hearing, there is nothing preventing the district board from making a closure decision at an upcoming meeting.

The board will hold a closure hearing on Enochville at 6 p.m. on Tuesday. Like the Faith hearing, the public can submit written comments to the board or sign up to speak to the board during the virtual meeting.

The public can sign up to speak to the board or submit written comments via this link: www.rssed.org/school-closure-hearing.