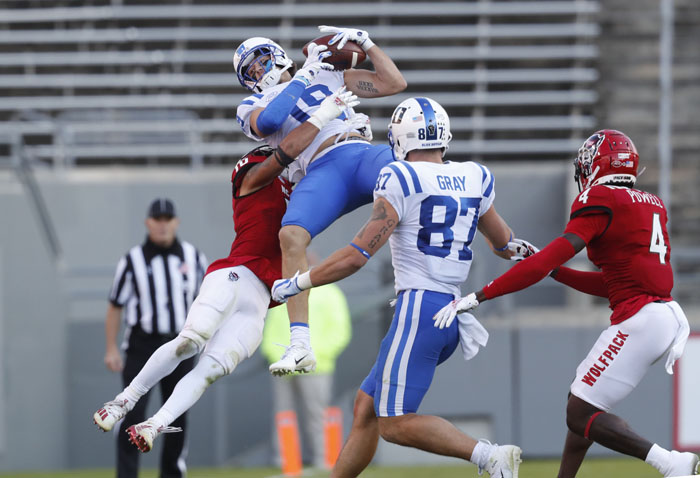 Angeline’s 4-yard scoring catch put the Wolfpack up for good late in the third quarter. Then Thomas added a highlight-reel grab early in the fourth, somehow snagging a 9-yard pass with his right hand and pinning the ball to his helmet while being knocked out of the end zone.

N.C. State (4-1, 4-1 Atlantic Coast Conference) got another strong defensive performance, surrendering only one offensive touchdown while coming up with a goal-line stand for the third straight week.

This time, N.C. State regrouped after a bumpy first half that included deficits of 10-0 and 17-7, as well as eight penalties for 106 yards. The Wolfpack cleaned up those mistakes to go ahead in the third, though that’s when Leary was carted off with an injury to his lower left leg.

“I think our confidence is really high,” Wolfpack coach Dave Doeren said. “I think we handle adversity well. There isn’t any flinch.”

The Wolfpack picked off Chase Brice three times, the last coming after the Blue Devils had driven to the N.C. State 40-yard line with 6:06 left in a one-possession game. Two of those interceptions came from linebacker Payton Wilson, who had 19 tackles — the most by any Wolfpack player since 2012.

Brice threw for 190 yards and a touchdown for the Blue Devils (1-5, 1-5), who ran for just 129 yards a week after relying on a dominant ground game to beat Syracuse.

It was the first meeting in seven years between in-state neighbors separated by about 25 miles, and the game featured the teams each tallying a blocked punt for a touchdown in the first half.

“I saw every position on our team fight and fight and fight,” Duke coach David Cutcliffe said. “Obviously we were not perfect by any means, and that’s my job, to get us to that point.”

Against the Orange, the Blue Devils ran for 363 yards and had 645 total yards, but they managed little consistent production in this one. They also added to a hefty turnover total that was at least five more than any other team in the Bowl Subdivision ranks entering the weekend and squandered multiple chances to grab or keep momentum.

Cutcliffe said Brice “played fierce and competed with everything he had,” taking the blame for calls on last two interceptions by saying: “I’ve got to put him in better positions.”

Leary’s injury comes after he had won two straight road games for N.C. State since retaking his starting job lost due to missed preseason workouts from contact tracing. He took a hard hit on a keeper from Duke’s Lummie Young IV — who was ejected for targeting — and Leary’s leg bent awkwardly beneath him with 55 seconds left in the third quarter. He offered thumbs-up while being carted off, then later returned to the sideline on crutches and wearing a protective boot.

Doeren didn’t offer specifics on Leary’s injury, saying: “It doesn’t look like we’ll have him for a while.”

Bailey Hockman relieved Leary and had his underthrown scoring pass slip through the hands of Duke’s Jalen Alexander before reaching Thomas’ right hand (and helmet) for the 28-20 lead.

This was N.C. State’s first home game since Gov. Roy Cooper announced the state would ease public-gathering restrictions related to coronavirus. Schools are allowed to fill 7% of their stadium capacity, so more than 4,000 people were allowed to scatter throughout the 57,600-seat Carter-Finley Stadium.

Duke: The Blue Devils have an open date before hosting Charlotte in their lone nonconference game Oct. 31.

N.C. State: It’s another instate rivalry game for the Wolfpack, who visit No. 5 North Carolina next Saturday.