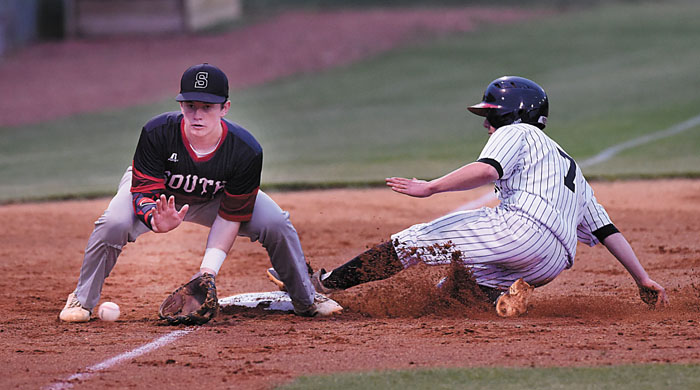 Jack Weaver awaits the throw at third base. File photo by Wayne Hinshaw, for the Salisbury Post

Baseball players come in all shapes and sizes, and Weaver has the bat, arm and glove to play the game for many years past high school.

He’s made a commitment to Surry Community College in Dobson.

In a normal world, the Raiders’ third baseman/closer might be going straight to a Division II program after graduation, but things stopped being normal last March.

“It’s not like Surry is a bad place to go and I’m excited to be going there, but COVID-19 was a big factor this year,” Weaver said. “There were a lot of schools that had showed interest, but you couldn’t visit places and coaches couldn’t come to see you.”

Weaver had a terrific baseball year in 2019. He batted .328 for South that spring and led the Raiders with 20 hits and 16 RBIs. He also saved two games on the mound and was named to the All-Rowan County team. In the summer of 2019, Weaver played for both the South Rowan Junior Legion squad that was state runner-up and for the Megastars showcase team.

The junior high school season is a critical one as far as recruiting, but Weaver was one of the many spring athletes who was denied a junior season. South had only played five games when the 2020 season was stopped. Weaver was off to a good start, 5-for-13 at the plate, and he’d already relieved in three games. He was the winner in one of them, shutting down Central Davidson in the seventh and eighth innings of a Central Carolina Conference game that the Raiders took in extra innings.

In South’s win against West Rowan — the Falcons’ only loss in the abbreviated season — Weaver went 2-for-3.

“Jack is a really good player with good fundamentals and a good work ethic,” South coach Thad Chrismon said. “But corona has really changed things and made things different for the colleges as far as recruiting. You can tell some things from seeing the video of a player, but I know the college coaches like to actually see the kids play. They like to see how they operate. They like to see how they prepare for a game. You can’t get those things from a video.”

Chrismon, a former UNC pitcher, has a junior son, Nathan, who also is going through the drastically altered recruiting process. He benefits from playing for the high-profile South Charlotte Panthers showcase team, but he also lost a sophomore high school season that he will never get back.

Weaver got started very early with baseball. In his earliest memories he had a ball in his hand, and he was a 4-year-old Tee Ball player.

He played football for a year and played basketball through middle school, but by the time he was 12 he knew his athletic future was on the diamond.

‘I’ve been around sports all my life,” Weaver said. “But I could see that my best chance to go far was going to be baseball.”

He was always an infielder/pitcher for his youth travel teams.

The Raiders have Chrismon to play shortstop and Ty Hubbard to play second base, so third base has become Weaver’s home.

“His reactions at third base are good and his arm is good,” Coach Chrismon said. “He’s one of the best third baseman we’ve had at South since I’ve been here.”

Weaver hasn’t hit with a lot of power to this point, although Chrismon believes that will come in time as he gets older and stronger.

“Jack is a very good hitter right now,” Chrismon said. “His swing is short and compact. He’s got a nice line-drive swing.”

While Weaver figures to be mostly a position player for Surry, either at third base or second base, he has a good enough arm that he’ll get some looks on the mound.

“They’ve told me I’ll probably be a two-way player and pitch some,” Weaver said.

Former Raider Bryson Bebber is currently in his second year with the Surry Knights.

He’s been able to give some advice to Weaver, whose main academic interest is business.

Weaver announced a commitment to the Knights just as September was turning into October.

He’ll have to wait until April for his senior high school season, but he’s got his fingers crossed and he’ll be ready when it gets here.

“I’ve been fortunate in baseball,” Weaver said. “I’ve always played with talented teammates and I’ve had coaches who pushed me to get better.”