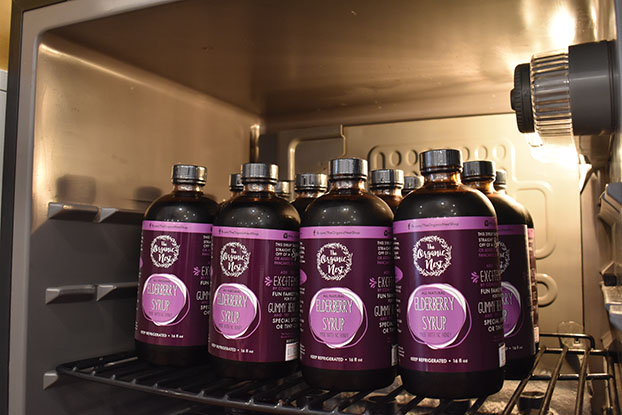 Bottles of elderberry syrup can be found in refrigerators in several shops throughout Rowan County, like at Hive in downtown Salisbury. Ben Stansell/Salisbury Post

SALISBURY — It doesn’t take long for Shelly Corriher to figure out whether a customer has entered her shop to browse the selection of home decor and gifts, or if they came for the syrup.

“The people that come for the elderberry syrup know it’s in here,” said Corriher, the owner of Wanderer’s Rest Home Emporium in China Grove. “They come in here, they come straight to the counter, they get their elderberry and they leave. They’re on a beeline to come in here and get it and go.”

As the weather cools and autumn turns to winter, more customers will enter her shop seeking the concoction, which is touted by some as a cold and flu repellant and treatment due to the high-antioxidant levels of the berries from which it’s made.

Corriher isn’t the only local merchant preparing for an increased demand for the purple product, which can be found in refrigerators in stores around the area.

“We have probably over 100 bottles in our fridge right now in anticipation of the cold and flu season,” said Brent Engelhardt, the co-owner of Old Town Soap Co., also in China Grove.

“With everything going on in the modern age, it’s definitely gaining popularity day by day,” Engelhardt said.

Old Town Soap carries a brand of syrup called Sweet’s Syrup, made by a Charlotte-based company that sources most ingredients locally, but gets its organic elderberries from Austria.

Elderberry syrup has emerged as a mainstay in modern medicine in recent years. The elderberry’s extract has also been packed into tinctures, teas and throat lozenges. Popular among those looking to goose their immune system or even help joint pain, elderberry syrup has been added to the inventory lists of several in the area. Despite the syrup’s recent prevalence, there are still many people who aren’t aware of what it is, its origins and how it should be used. 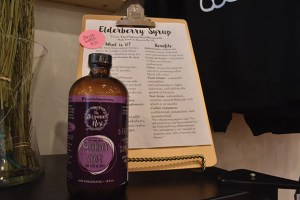 Elderberry syrup is high in antioxidants and typically contains several other ingredients besides just the berries, including honey, cloves, ginger and cinnamon. Ben Stansell/Salisbury Post

Like many parents, Ashley Ezell found herself looking for something healthy that her kids would actually eat. Having heard of the high antioxidant content of elderberries, Ezell decided to cook up some of the syrup for her kids.

“Once you have a kid, especially a toddler, you start looking for things that they’ll actually take,” Ezell said.

It wasn’t the first time Ezell had experimented with creating her own home remedy. Three years ago, Ezell made her own bug spray. That bug spray springboarded into a business called Organic Nest that Ezell started with Shelby Dench. Ezell and Dench began crafting more organic, locally sourced products for their burgeoning company, quickly adding soap, sugar scrubs and more to their repertoire. Since then, they’ve purchased a 2,000 square-foot warehouse and have plans to open a storefront soon.

One of the products Organic Nest offers is a version of the syrup Ezell first made for her children several years ago. Mixed with honey, cloves, ginger and cinnamon, the sweet syrup Ezell made was an instant hit with her kids. It was a hit with other parents’ kids as well.

“We had a few friends that were interested in buying from us,” Ezell said. “We started with a little four-cup pot and we could only make one bottle at a time and our friends would come and buy it from us.”

Word started to spread and local stores came knocking at Organic Nest’s door, looking for the product that customers were asking them about.

Since then, Organic Nest has added a number of local shops to its roster of vendors that sell elderberry syrup, including Wanderer’s Rest Home Emporium and Hive in downtown Salisbury. Ezell said Hive was one of the first stores to call them looking for elderberry syrup. While most of the ingredients Ezell uses in the syrup are sourced locally, the berries themselves come from outside the state, simply because there’s not a nearby supplier large enough to meet their demand.

“We purchase so much now that we get 2,000 pounds of berries at a time,” Ezell said.

Elderberries grow wild in North Carolina. Ezell said she’s seen them growing in vacant fields and on the side of roads. Elderberries are even cultivated by some growers in the area, such as Beth Witherup, whose family runs a small farm in Mt. Pleasant.

Witherup, a trained herbalist, recently planted about 20 elder trees on their farm and has plans to eventually sell the berries to companies like Organic Nest that use them to make syrup. Witherup first learned of the elderberry about 10 years ago and believes in its ability to bolster the immune system, but cautions people not to take it too frequently and to not use it as a silver bullet to cure any ailment.

Michelle Pentoney, the owner of Hive, became interested in elderberry syrup for the same reasons as Witherup — because it serves as a natural remedy instead of a pharmaceutical solution.

Pentoney has seen the product increase in popularity since she started carrying it several years ago. She remembers the mad scramble to find berries for syrup when there was a shortage in 2018. But lately, Pentoney hasn’t been selling as many bottles of syrup as she’s grown accustomed to.

Pentoney said she thinks the primary reason for the slowdown in sales is that people have been quarantining and might not feel the need to bolster their immune systems by drinking the syrup. Pentoney, like other purveyors of elderberry syrup, said she is hoping elderberry syrup’s popularity will pick up in the fall and winter as it typically has.

While elderberry’s popularity as a treatment for the cold and some strains of the flu is well-founded, Dr. Russell Greenfield, the director of integrative medicine at Novant Health, said the using the syrup in the time of COVID-19 is a little more complicated.

In the past, Greenfield has been a major proponent of elderberry syrup. Greenfield, who focuses on “healing-oriented care that takes account of the whole person,” has administered elderberry syrup to his children, has taken it himself and has recommended it to his patients.

“I am a big fan of elderberry, pre-COVID days,” Greenfield said. “I recommended it often and my family and I used it often.”

With the emergence of COVID-19, that has changed.

Greenfield said elderberry extract is generally safe and has been used for a long time, but the majority of research points to it being more effective as a treatment than as a preventative for influenza or the common cold. However, Greenfield called it a “leap of faith” for people to assume it will work against COVID-19 in the same way. In fact, Greenfield said that its immune-boosting powers could be a negative for someone who contracts the novel coronavirus.

“Elderberry extract looks like it has an immune-boosting effect and the concern in the setting of Coronavirus is that it may contribute to something called cytokine storm,” Greenfield said. “Cytokines are compounds within the immune system that, if you get too many of them, it might lead to an over-vigorous response from the immune system.”

Greenfield said that cytokine storm could lead to a buildup of fluid or debris in the lungs or other organs.

“It’s not like we know that elderberry is going to cause cytokine storms or contribute toward it, but where we are uncertain and where we have concerns about risks, we say you have to be careful,” Greenfield said.

For people who do take elderberry as a preventative, Greenfield would personally advise them to stop taking it at the first sign of a cough, scratchy throat or if they test positive for COVID-19. Overall, Greenfield would classify taking elderberry syrup as low risk, but advises people to be cautious. He also encourages people to take control of their own healthcare and to consider advice from herbalists if they are taking elderberry syrup or other similar products.

“I look forward to the day where I can recommend it with impunity again,” Greenfield said.