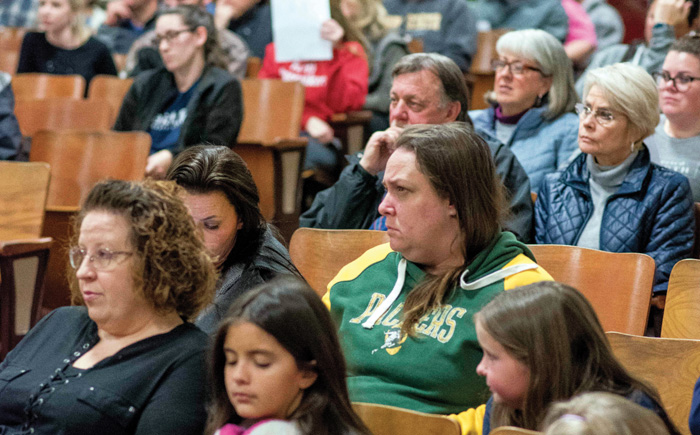 SALISBURY — Locals will have another turn to make their thoughts known on the potential closure of Faith and Enochville elementary schools during virtual closure hearings scheduled this week.

The two schools were identified for possible closure before the COVID-19 pandemic reached North Carolina. But the Rowan-Salisbury Schools Board of Education returned to the issue recently and scheduled public hearings on the proposed closures. After public hearings this week, the board could choose to close the schools at a later meeting.

Faith’s hearing will be held virtually on Monday at 6 p.m., and Enochville’s will be held at the same time on Tuesday.

A form, full instructions for listening or submitting comments as well as speaking to the board can be found at rssed.org/school-closure-hearing. Those who want to speak to the board must sign up by 3 p.m. on the day of the hearing by emailing clerk Sonya Mulkey at mulkeysh@rss.k12.nc.us.

The schools were chosen for reasons listed on a capital needs chart created by a committee in 2017 and updated this winter, including current and maximum capacity, utility costs, building age and outstanding capital needs. Faith and Enochville scored low along with Overton Elementary, but Overton is already set to be consolidated with Knox Middle School into a K-8 on the same property.

The closure studies are a required part of the closure process and assess the impact on the students and staff. The district does not plan to lay anyone off as a result of closures; staff would be reassigned. Superintendent Lynn Moody has said the district is actively looking for more teachers already.

Students, meanwhile, would be reassigned to a nearby school.

Moody has pushed for consolidation since she was hired in 2013, pointing to an excess of facilities in a district which already had a declining student population. The district had thousands of empty seats before COVID-19, and the number of in-person students has declined further because of the pandemic and the creation of virtual options within RSS, including Summit Virtual Academy, which currently has about 2,700 students who are not attending classes in person.

The administration estimates, conservatively, it would save $500,000 a year per facility it closes.

Despite the numbers pointing toward closure, the board has been slow to make decisions for years. Enochville has been up for closure before along with Faith Elementary. North Rowan High School was also a target. At times, the board has opted to combine schools in conjunction with closure decisions, including Woodleaf and Cleveland elementary schools.

Consolidation also usually comes with criticism, and the Knox-Overton K-8 project is an example of plans shifting following opposition to closure. Originally, the district was planning to close Overton and move Knox students into the building while major renovations were completed on Knox building. Overton would have been closed after renovations were done.

Moody has pointed to unwillingness to make decisions creating a phenomenon where schools close themselves. Enochville lost 100 students in one year after its name was drawn for closure.

Board members who opposed consolidation in the past have voted in favor of moving closure proceedings forward recently. Jean Kennedy voted in favor of scheduling the public hearings, and Alisha Byrd-Clark, though she came on the board opposing school closure, has said now that she understands the issue better and does not oppose it.

CSAB chair and state board member Alex Quigley said the decision to move the academy along would make the board’s decision easier.