Local voters turn out in droves to cast more than 3,200 ballots for first day of early voting 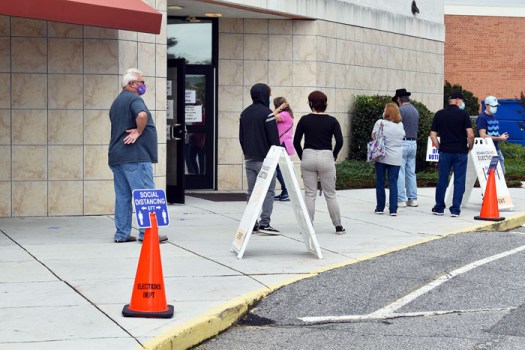 Natalie Anderson / Salisbury Post — Rowan County voters turned out in droves during the first day of Early Voting on Thursday, Oct. 15, at the West End Plaza. Voters have 16 additional days to cast an early vote before the General Election on Nov. 3. 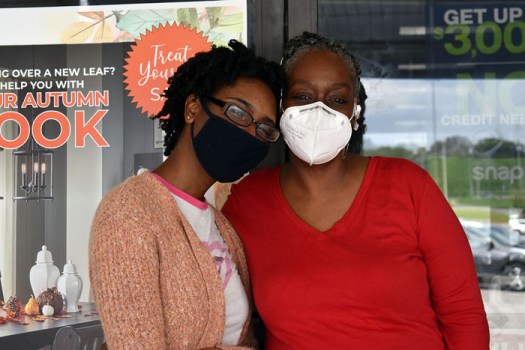 Natalie Anderson / Salisbury Post — (left to right) Zaria Corpeening, 18, is a recent graduate of West Rowan High School and first-time voter. She said voting is something she just knows she has to do. 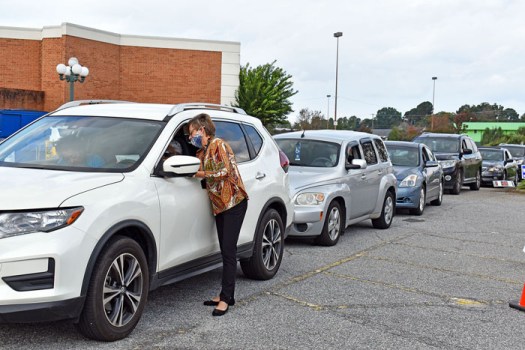 Natalie Anderson / Salisbury Post — Rowan County election officials said that at any one time, at least 25 vehicles were lined up on Thursday, Oct. 15, for curbside voting during the first day of early voting in Rowan County at the West End Plaza. 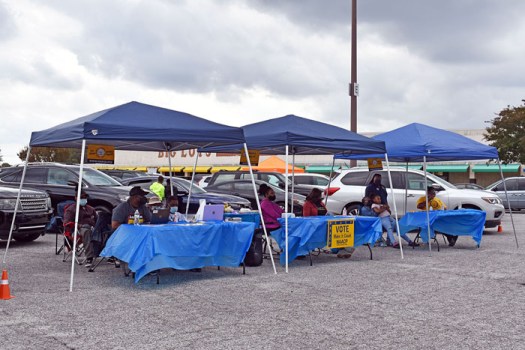 Natalie Anderson / Salisbury Post — The Salisbury-Rowan NAACP hosted a "Party at the Polls" at the West End Plaza during the first day of early voting in Rowan County on Thursday, Oct. 15. The party began with a nearly 50-car motorcade of voters expressing enthusiasm for this year's election and turnout. 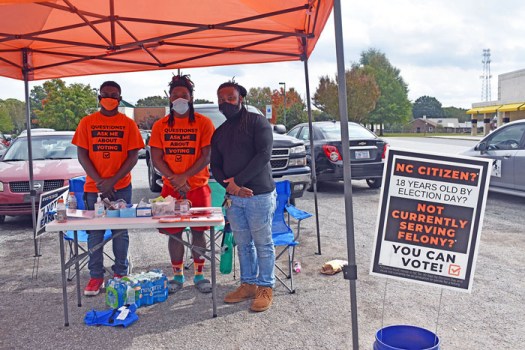 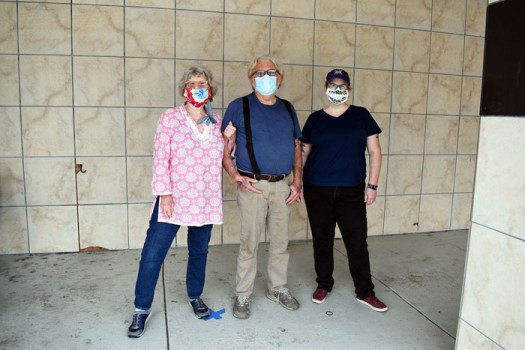 Natalie Anderson / Salisbury Post — (from left to right) Marietta Smith, Mark Smith and Kendra Burnette were among the dozens in line to vote on Thursday, Oct. 15, at the West End Plaza for the first day of early voting. All three said the turnout is evident that people have strong feelings about the 2020 election.

SALISBURY — With some arriving more than an hour before early voting began at 8 a.m. on Thursday, Rowan County voters turned out in droves to cast more than 3,200 ballots for the 2020 election.

Rowan County Board of Elections Director Brenda McCubbins said the West End Plaza site, home to the county board of elections, only experienced minor issues with printers when polls first opened. But overall, things went well.

“We really had a successful day,” she said. “Everything went smoothly.”

By 6:30 p.m., McCubbins reported that about 970 ballots had been cast at West End Plaza, along with 820 at the South Branch of the Rowan Public Library in China Grove; 779 at the Rockwell American Legion; 345 at the Spencer Municipal Building; and 361 at Cleveland Town Hall.

McCubbins said only a few people weren’t wearing masks when they arrived. But each voting site was equipped with face masks to provide voters.

Adjacent to a parking lot full of vehicles, including dozens in line for curbside voting, voters at the West End Plaza on Thursday expressed excitement about the turnout on the first day of early voting, and emphasized the importance of this election in particular.

“We’re voting to save the democracy,” said Marietta Smith.

Smith is a regular early voter and she’s not used to waiting in line to do so. But this year, voters, including Smith, have a strong feeling about the election this time-around. She cast her votes for former Vice President Joe Biden and Gov. Roy Cooper as she said they’re both “educated, intelligent statesmen” who won’t “further divide us.”

At any given time, election official Gregg Lowe said at least 25 cars were in line for curbside voting.

“I have never seen it like this before,” he said, adding that most elections he’s assisted with only see a few cars arrive for curbside voting.

Three election officials at West End Plaza helped with curbside voting, which provides an option for people with disabilities to vote without exiting their vehicle. Election officials take the voter’s information and then verify the voter’s status and whether they’re disabled. Voters sign an affidavit and election officials return voters’ ballots inside and run them through a counting machine. Once completed, Lowe said, officials normally give voters the thumbs up.

Salisbury resident Rafat Saba said her husband waited for more than three hours to vote Thursday morning, even after arriving before the polls opened at 8 a.m. Saba said she was excited to see the turnout.

“Everything is on the line,” she said.

In line behind Saba was another Salisbury resident, Patricia Watkins, who encouraged everyone to get out and vote.

“I saw a line and I did not mind getting out of my car and waiting in line,” Watkins said.

Zaria Corpeening, 18, is a graduate of West Rowan High School and a first-time voter. She said her friends are into politics and she keeps up with what’s going on because voting is something she knows she has to do.

Voters said they were satisfied with the COVID-19 measures in place. Patti Bettoli and Leah Baker said they were surprised masks weren’t required inside, but they only noticed one person not wearing one. The covered walkway leading to the entrance of the Rowan County Board of Elections was marked with tape to socially distance people outside, each voter was given their own pen and stations were sanitized after each voter cast a ballot.

Both Bettoli and Baker said they supported Cooper due to his handling of the pandemic and because the state “needs to keep schools safe.” Baker said she voted for Democrats because she doesn’t like the current climate within the nation.

Terry Bond said he was satisfied with the turnout and the COVID-19 measures in place so he and others could do what they can to prevent the spread. The pleasant weather was a plus.

Bond said he votes Republican because he supports conservative policies, and he wants to continue the direction the nation is currently going. Additionally, President Donald Trump has done “exceptional” at handling the pandemic, he said.

“(This election) could be the turning point in our country,” said Marty Sehnal, who stayed near a tent providing voters with information on conservative candidates.

Sehnal said voters’ minds are made up by this point in the election, but not all voters are aware of the different policy stances among conservative candidates, who he feels “have a more honest grasp with what’s going on” in the country.

Many of the voters at the Rowan County Board of Elections Thursday afternoon were there for a Salisbury-Rowan NAACP “party at the polls,” which began around 1 p.m. with a nearly 50-car motorcade of voters expressing enthusiasm for the first day of early voting.

“You can feel the energy, it’s a different time. Time for change,” said Salisbury-Rowan NAACP President Gemale Black. “The energy is high.”

Black said Thursday’s turnout was the result of enthusiast voters rather than issues with voting. He told voters to make sure they stay in line, and if they need water or snacks, he and others will provide. He encourages everyone to take advantage of Sunday voting this year and said this year’s extended voting options are “leaning toward a good direction.”

Rowan-Salisbury Schools Board of Education incumbent Alisha Byrd-Clark was also present at the West End Plaza on Thursday. Byrd-Clark said she was excited to see the turnout when she arrived at 8:20 a.m.

“I feel super proud of Rowan County,” she said.

Byrd-Clark also encouraged everyone to take advantage of early voting, especially Sunday voting. For the first time, voters can cast their ballots on two Sundays — Oct. 18 and Oct. 25 — from 1 p.m. to 5 p.m.

Additionally, some Livingstone College students volunteered with the nonpartisan “You Can Vote” organization Thursday to provide voting information and eliminate any voter intimidation.

Local voters were just a small portion of the high turnout reported by the State Board of Elections compared to the first day of early voting in the 2016 election. As of 5:30 p.m., nearly 230,000 ballots had been cast across the state, which easily surpasses the total for the entire first day of voting in 2016 when about 166,000 ballots were cast.

State elections data show that, combined with early voting numbers, more than 782,000 North Carolinians have already voted in the general election, which amounts to about 11% of registered voters.