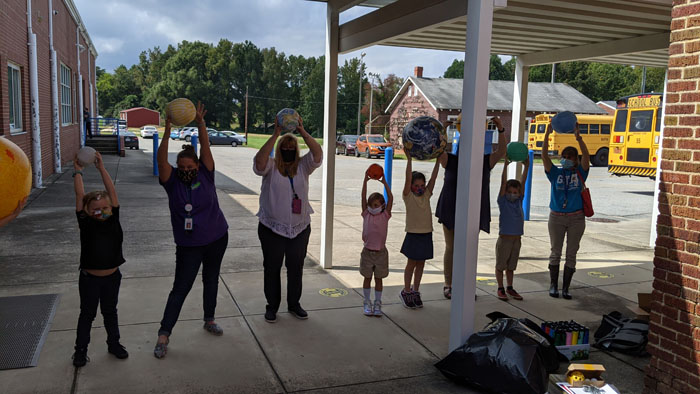 “At the end of that program, it was like ‘OK, we’re going to take a break, then we’ll land on the moon again,’” Pifer said. “Well, it just hasn’t happened.”

Space has been a lifelong fascination for Pifer, who spent most of his career teaching in the classroom, but when he was given the chance to take charge of Rowan-Salisbury Schools’ Margaret C. Woodson planetarium he couldn’t turn it down.

On Oct. 6, Pifer was named part of a cohort of 15 educators in the state who will receive training through a partnership between N.C. Space Grant and NASA. The program is called North Carolina Space Education Ambassadors, and the goal is to build a network of teachers who teach NASA contents to the community

The cohort will visit NASA Langley in Hampton, Virginia, and undergo an intense professional development course. Cohort members will learn about missions and bring NASA back into classrooms. Members will also get to network and build contacts with NASA experts to keep supporting them in the future.

Pifer said there’s a long tradition of Woodson staff being NASA ambassadors and part of the Space Grant.

“Our planetarium was built during the space race,” Pifer said. “A partnership between the planetarium and NASA education seems like a really natural fit.”

NASA Langley Education Program Specialist Gina Blystone said many educators are not familiar with missions and do not understand how to teach content with a mission focus or they may not feel confident enough in their understanding to do so.

N.C. Space Grant Associate Director Jobi Cook said the hope is to equip teachers with NASA tools and so they can inspire future space explorers in the state.

Pifer said the hope is to educate people about upcoming missions rather than looking back. The U.S. shuttle program flew its last mission in 2011, but Pifer pointed to the successful tests by American company SpaceX, which develops spacecraft and partners with NASA. The company’s vehicles have flown resupply missions to the International Space Station, and 2020 marked the first crewed launch of its second generation of reusable spacecraft.

Pifer said this is a good time to be a space educator.

“I think having Americans launch from American soil with an American company has kind of jump-started a whole new era of excitement about the space program,” Pifer said.

There is a whole generation of kids born near the end of the shuttle program in school now, and they have not had the chance to experience the excitement of the launches, Pifer said. Even though there have been launches on the soil of other countries, it’s not the same, he said.

Pifer said there are upward of 30 contractors solving problems to make a sustainable system to create a base on the moon. He said the technology is meshing with his dreams.

“That’s going to be a whole opportunity for a whole generation of kids to want to go to space again,” Pifer said.

The planetarium is a different experience now than what some may remember from visiting when they were in school. The facility has a new projection system, 360-degree cameras and the ability to show audiences what is going on in space right now.