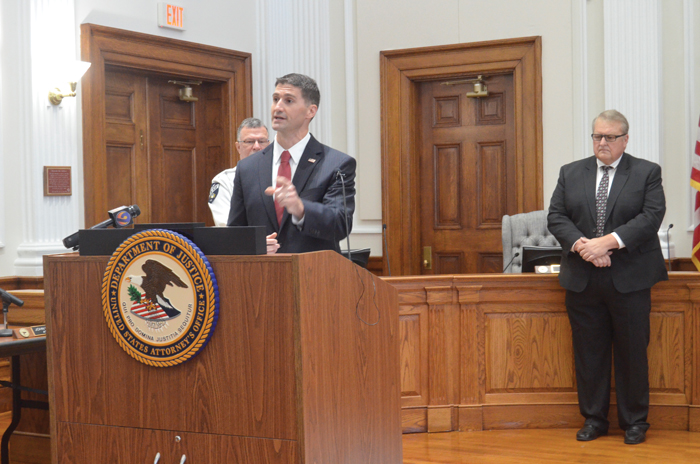 SALISBURY — Since October 2019, 50 people from Rowan County have been indicted federally for drug-related or other violent crimes as a result of the community partnerships made through Project Safe Neighborhoods.

Matthew Martin, U.S. Attorney for the Middle District of North Carolina, along with local and state law enforcement partners, gathered Wednesday morning to talk about strides made through the federal program, which targets repeat violent offenders. Those offenders are notified by law enforcement or their probation officers and placed into the program. Once in the program, if they continue to commit crimes and are convicted, they run the risk of being prosecuted federally.

A year ago, a room full of 20 probationers met with community and law enforcement agencies in a “scared straight-style” meeting to give them the grim reality that continued criminal activity could lead them to prison or death. On Wednesday, Martin gave a review of the Project Safe Neighborhoods strategies used in Rowan County and throughout the state.

Project Safe Neighborhoods is a nationwide initiative that brings together federal, state and local law enforcement officials, as well as prosecutors, and community leaders to identify the most pressing violent crime problems in a community and develop comprehensive solutions to address them.

The message delivered in October 2019, Martin said, was that violence would stop in Salisbury in one of two ways: “Either you’re going to choose to leave the life — choose to stop the street life and you put down the guns — or we’re going to prosecute you to the fullest extent of federal law and state law.” Anyone “flagged” by law enforcement would be offered an alternative to continued criminal activity. If someone on the notification list is convicted after being found engaging in criminal activity that involves violence, gang activity and weapons possession, that individual would receive a federal prison sentence.

During the initial work in 2019, researchers at UNC-Greensboro along with the Rowan County Sheriff’s Office, Salisbury Police Department and other law enforcement agencies in Rowan County looked at crime rates and found 20% of the people were committing 80% of violent crimes in the county. Through research from UNC-Greensboro, the police department also was able to understand the root causes of violent crimes taking place and further develop strategies.

Since then, the U.S. Department of Justice has provided training and technical support to local law enforcement, including a partnership with the Salisbury Police Department.

“All for the purpose of getting people who are willing to do violence, to stop,” Martin said.

Martin said there also has been success shown this year, including a reduction in property crime rates and the number of robberies. Martin said rates have improved on aggravated assaults, but admitted there’s still work to do. The year 2016, said Police Chief Jerry Stokes, was one of the worst on record for violent crime, including homicides, in Salisbury.

A lack of funding previously contributed to an empty coordinator position for Project Safe Neighborhoods. Stokes and Rowan Sheriff Kevin Auten solved that by joining forces and securing funds from the Salisbury City Council and Rowan County Board of Commissioners.

“This national program was another huge step in the right direction of violent crime reduction,” Stokes said.

The police department was able to hire a criminal analyst in 2019 and hired a second in August.

The department has worked with the Rowan County District Attorney’s Office to improve case preparation, resulting in an increase in the solve rate of homicides from 40-50% to 100% in 2017 and 2018. This year, Stokes said, there is one unsolved homicide in the city. In that incident, Xavier Gibson, 17, of Charlotte, was shot and killed in September outside of the Laurel Pointe Apartment complex.

Stokes pointed out that all federal support and assistance was provided without the use of local funds.

“It’s enabled me to do things that I couldn’t have done without those resources,” Stokes said. “The result of these efforts has reduced overall crime in Salisbury to a 20-year low and most significantly our violent crimes is the lowest it’s been since 1999.”

The partnerships are two-pronged, Auten said.

“When folks continue to mess up and do the wrong thing we are going to do everything we can to prosecute them to the fullest extent of the law whether it’s through Brandy Cook and our local district attorneys, or Matt Martin’s office in Greensboro,” he said. “We’re going to see that they get the maximum amount of time that they deserve for the crimes they commit. However, if they choose to listen to what we offer them through Project Safe, our community partners, the clergy, the business folks … we’re going to offer that on a platter.”

He said they would much rather help them become good, productive citizens in the community than prosecute them.

“Some are going to take that choice. Some have taken help from our partners but some choose to continue to wreak havoc on our community and then we have to do what we have to do,” Auten said.

Auten noted that local agencies have partners in Cabarrus County, specifically the Kannapolis Police Department, who helped Rowan get its Project Safe Neighborhoods program up and running.

Rowan District Attorney Brandy Cook; Kannapolis Police Chief Terry Spry; Sylvia Warren, of the local community corrections department; as well as Assistant U.S. Attorney Rob Lane, who is also the Project Safe Neighborhoods and Anti-Gang coordinator for the Middle District of North Carolina, were all in attendance at the meeting.

Christopher Healy, deputy special agent in charge of Homeland Security across North and South Carolina, spoke about successful investigations and prosecutions that led to the deterrence of narcotics traffickers, violent domestic and transnational gangs operating in North Carolina.