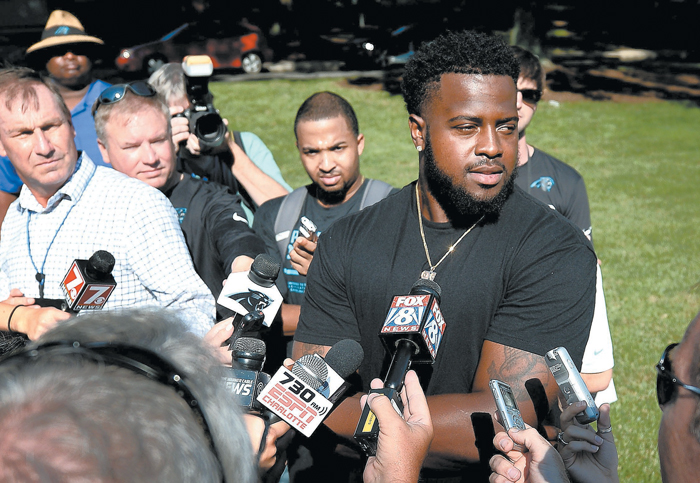 Carolina Panthers defensive tackle Kawann Short, right, answers questions from the media. He missed another Panthers season after being injured and only played a couple of games the season before. (Jeff Siner/The Charlotte Observer via AP, file photo)

CHARLOTTE — The Panthers have lost two-time Pro Bowl defensive tackle Kawann Short to a shoulder injury for the second straight season, and 2019 All-Pro running back Christian McCaffrey is not quite ready to return to action either.

Panthers coach Matt Rhule said the  315-pound Short will need season-ending surgery on his right shoulder, but wouldn’t get into the specifics of the injury. Short missed the final 14 games of last season after tearing the rotator cuff in his left shoulder. He will be placed on injured reserve.

Short injured the shoulder in the third quarter of Carolina’s 23-16 win over the Atlanta Falcons on Sunday.

Rhule also said that McCaffrey is expected to remain on injured reserve for now while recovering from his high ankle sprain. McCaffrey has missed the last three games and Rhule said “he’s still working to get back and as soon as we can get him back, we will get him back.”

Short had missed two starts this season with a foot injury and finished the season with five tackles and no sacks.

Rhule didn’t say who would start at defensive tackle alongside rookie Derrick Brown on Sunday against the Bears, but Zach Kerr is the most likely option. Rookie Bravvion Roy is also a possibility, and defensive end Efe Obada has the flexibility to move inside and play tackle, too.

Rhule said the Panthers still feel good about the defensive tackles they have on the roster, and doesn’t feel the team will need to bring in help from outside of the organization except to potentially sign a practice squad player. “It will be a next-man-up thing,” Rhule said.

In other injury news, Carolina’s starting defensive ends Brian Burns (concussion) and Yetur Gross-Matos (ankle) both were held out of practice after sustaining injuries on Sunday. Cornerback Donte Jackson was limited in practice with a toe injury.

Carolina’s defense has been much improved during a three-game win streak, but remains 29th in the league in sacks and 30th in third-down defense. If three starting linemen are out against the Bears, that could cause problems for the defense.

The Panthers also are taking enhanced precautions against the coronavirus following their exposure to Falcons defensive tackle Marlon Davidson during Sunday’s win at Atlanta. The Falcons placed Davidson on the reserve/COVID-19 list on Tuesday.

Carolina has entered the NFL’s “intensive protocol” as the team prepares for Sunday’s game against the Chicago Bears.

Under the new protocols established this week, all coaches and staff must wear masks at practice and all players must wear a face shield or mask. Players can remove their helmets for breaks but must be more than 6 feet away from one another. Team meetings will be held either outdoors or virtually.