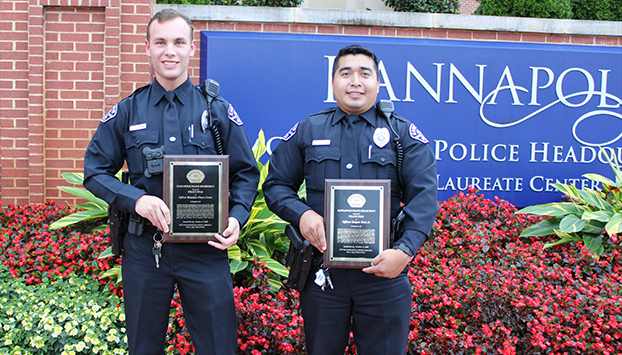 KANNAPOLIS — Police officers Brandon Crowe and Gasper Ruiz Jr. have received police stars, the second-highest honor any officer can receive for saving a man from potential injury or death.

The city of Kannapolis announced the awards Tuesday, saying that Crowe and Ruiz were two of four emergency services personnel who recently received awards. Officer Donald Newton was presented with the Roger Dale Carter Memorial Service Award, given in memory of Kannapolis Police Officer Carter, who died in the line of duty on Dec. 31, 1993. Telecommunicator shift supervisor Heather Clay was awarded with the Norma C. Howard Memorial Service Award. Norma Howard was the first female civilian police employee in Kannapolis and was instrumental in establishing the records department.

Crowe’s and Ruiz’s awards were given for their response to an incident this summer in which they found a man on the I-85 Lane Street bridge with his legs hanging over the guardrail. The man was in mental distress, the news release said.

Ruiz started talking to the man, which drew his attention away from Crowe, who approached the man without being seen. The pair of officers grabbed the man and pulled him back across the guardrail. The man was transported to the hospital for evaluation and care.

“The initiative and personal courage displayed by officers Crowe and Ruiz on this occasion exemplifies the highest ideals of law enforcement and reflect great credit upon themselves and the Kannapolis Police Department,” said Kannapolis Police Chief Terry Spry. “They displayed unusual determination, valor, initiative, skill, selflessness, or professionalism in order to save a person who was under distress.” 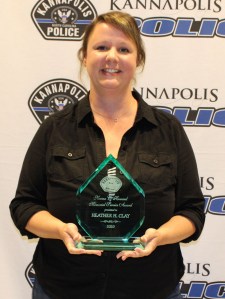 Meanwhile, the Norma C. Howard Memorial Service Award is presented annually to a civilian police department employee who conducts both their personal and professional lives in a manner that is consistent with the department’s values and code of ethics. Clay, who received the honor this year, joined the department in 2006 and was promoted to telecommunication shift supervisor in 2011. In addition to her duties as a shift supervisor, she is also a field training officer.

“She is a great leader, who leads her shift by example, always holding herself and those around her to the highest of standards. She is always courteous and eager to assist when needed and an asset to our department,” said Capt. Justin Smith.

She is married to Kannapolis Fire Department Battalion Chief Joshua Clay and they have a daughter, Carlee. 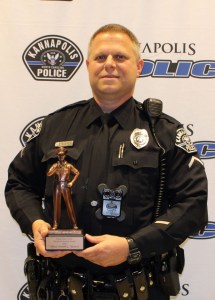 Annually, an officer is presented with the Roger Dale Carter Memorial Service Award, given this year to Newton, who has been a Kannapolis police officer for five years.

“He possesses an exceptional reputation for personal honesty and integrity that is beyond reproach. Officer Newton consistently does more than his fair share of work. He follows up on investigations even after they are closed and makes connections within the community,” said Deputy Police Chief Daniel Wallace. “On multiple occasions, he has assisted people who are actively dealing with mental breakdowns. We regularly have citizens calling into the center and requesting this officer due to the rapport he creates with them. He treats everyone with compassion and does everything in his power to ensure he can get people the help they need and leave them in a better place than when he first arrived on scene.”

Newton was also cited for efforts to create camaraderie and teamwork with other officers. He buys meals and hosts squad functions at his home. Newton and his wife, Michelle, have been married for 24 years and have three children, Bradley, Josiah and Xander. They are active members of Kannapolis Church of God, where he is an elder.