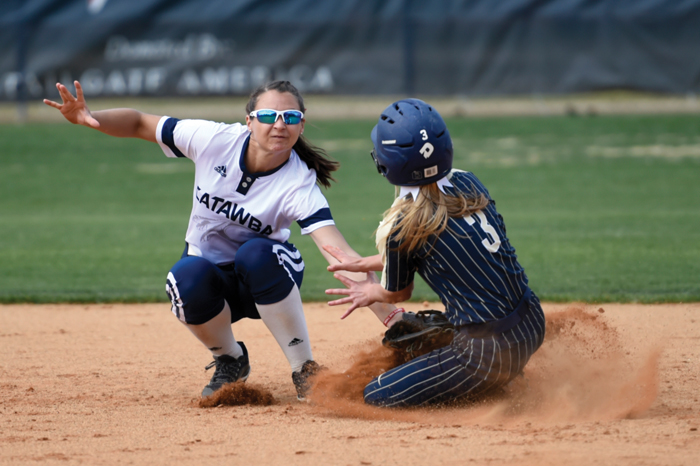 SALISBURY — Hired to lead Catawba College’s softball program in the summer of 2018, back before the sports world turned upside down, Mandy Harris-Morgan hasn’t seen a lot of normal since she and her husband unpacked their suitcases.

An earthquake. Tornadoes. Hurricanes. Floods. Whitley Field has been transformed into Lake Whitley more than once.

She was greeted by a wacky 2019 South Atlantic Conference softball season in which Catawba dropped its last four games and fell from contending for the title to a tie for ninth place in the span of a week. That placed Catawba in the awkward and unpleasant position of hosting a SAC tournament for which it failed to qualify.

On the brighter side, 2019 also was the year that lights were installed at Whitley Field.

But then came the spring of 2020. Harris-Morgan’s second softball season was nipped in the bud at the halfway point in the regular season by COVID-19. Catawba’s last game was on March 8.

Catawba wasn’t off to a super start, 10-12 overall, but there were encouraging signs. The Indians had won six of 10 road games and shortstop Jordan Dean already had walloped seven homers. The team’s overall offensive numbers were similar to 2019, but the pitching numbers were better. That probably would have led to good things over the course of the season.

A number of seniors had careers cut short last spring. While the NCAA provided an extra year of eligibility, most of Catawba’s graduating group had jobs or grad schools lined up and moved on.

The exception was pitcher Brooke Walser, who is listed on the 2021 roster as a graduate student. She’s working as a nurse, but has elected to return to the softball team and is participating in fall workouts. She should make a difference for the Indians as a fifth-year player. She has a wealth of experience and owns 23 career wins, including four shutouts.

“Brooke is working in Thomasville, three 12-hours shifts a week, but she’s also working out with us whenever she can,” Harris-Morgan said. “She’s doing a lot of big-girl stuff right now. She’s engaged. She’s bought a house. I know she likes getting paid.”

Under normal circumstances, Catawba would be playing some practice games in the fall and new team members would be getting acclimated to the level of college competition.

That isn’t permitted now, but Harris-Morgan is satisfied with the opportunity for workouts. Catawba works out as often as four times per week and plans to continue those efforts until the end of the first semester in November.

Catawba will have a much longer holiday break than is normal, with most students departing prior to Thanksgiving. The second semester won’t begin until Jan. 21. That’s going to allow Catawba  basketball to play a lot of its season in the equivalent of a bubble.

As far as softball, no massive upheaval is expected. While fall and winter sports have been dramatically impacted by COVID-19, Catawba’s spring sports are proceeding with the hope of playing almost a normal 2021 schedule.

“The spring seasons are basically still on track.” Harris-Morgan said. “The softball season for Division II did get trimmed a little bit by the NCAA, down to a maximum of 44 games.”

Catawba softball players will report back to campus before their classmates, on Jan. 11, to start full-scale practices in preparation for a Jan. 31 opener.

Catawba freshman pitcher Whitley Arnott, who starred at West Rowan, has been limited by an elbow issue, but Harris-Morgan is confident she’ll be fine for the 2021 season.

“We don’t have any major injuries, just some little stuff,” she said. “I’m praying that we all stay healthy.”

Harris-Morgan said Catawba was wrapping up recruiting for the Class of 2021. She was waiting to hear final decisions from two players who were offered the last two scholarships.

Recruiting is almost non-stop. She and assistant Shane Prescott will soon be moving on to evaluating players in the Class of 2022.

Recruiting was challenging last season, with the high school seasons being shut down early and camps and tournaments being canceled.

“A lot of strange stuff has happened, but we feel good about where we are right now,” Harris-Morgan said.

Elliott wins at Roval as champ Busch bounced from…