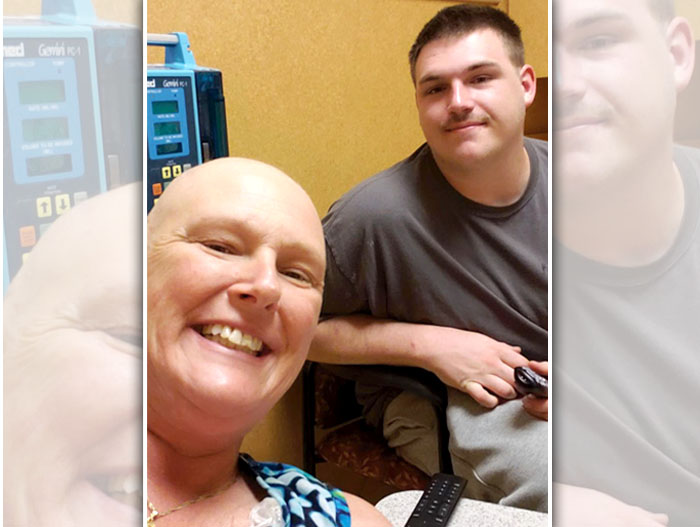 Steven Strader said that he and his mother Roberta Poe have formed a close bond since she was a single mother. He will be walking for six consecutive hours Friday to raise money for her cancer treatment. Photo submitted.

CLEVELAND — Steven Strader walks several miles at work on an almost daily basis, but the miles he plans on walking Friday could be the most meaningful of his life.

For six hours, starting at 11 a.m. and ending at 5 p.m., Strader will walk back and forth from 101 School St. to 302 E. Main St. in downtown Cleveland. At a regular walking pace, Strader estimates that by the time he is done he will have walked about 10 miles.

Strader said that he makes a version of the walk frequently, but this time, he’s doing it to raise money for his mother’s cancer treatment.

Strader said that his mother, Roberta Poe, was diagnosed with breast cancer in early January. Since then, she has undergone several rounds of treatment and has had a double-mastectomy. Insurance covered a major portion of medical costs, but that still leaves Poe with the burden of paying for the rest. In total, Strader said that costs have exceeded $100,000. Strader said that Poe will soon undergo radiation treatment to prevent the potential spread of cells elsewhere in her body.

During the walk, Strader will be wearing a shirt adorned with a pink ribbon and a statement that reads “Most people never meet their hero. I was raised by mine.” For Strader, those words ring true.

“For the most part while I was a child, it was a single-parent household, so that made us really close,” Strader said. “As we got older, it’s kind of like I grew up with my best friend because we really only had each other.”

Strader said that the walk will give him a chance to support his mom’s fight against cancer, which is something that he said has been difficult for him to do given his work schedule at Freightliner. That changed recently when Strader’s schedule opened up, allowing him to have a couple days off each week. He plans on using one of those days for the walk, which he has called the Roberta Poe Walk for Hope.

While his job may have made it difficult to spend as much time with his mother as he would have liked, Strader said that it played a part in inspiring the walk. As a team lead at Freightliner focusing on cleaning, Strader estimates that he may walk more than 10 miles during a shift. Walking during work is something that ties him and his mother together.

“I already walk a ridiculous amount everyday at work and my mother does as well working at the post office, where she delivers inner-city mail,” Strader said. “Since walking is something I get practice at anyway, I thought I could set up a walk right here and use that to raise money for my mom’s radiation treatment.”

While she was undergoing treatment, Poe was forced to leave work for several months. She returned to work at the end of September.

During the walk, Strader will carry a basket for donations. Donations will also be accepted at a station at 101 School Street.