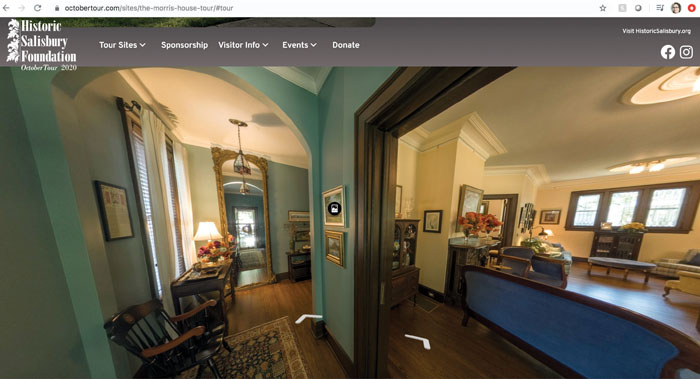 The interior of the Morris House. The Historic Salisbury Foundation hosted its annual OctoberTour virtually this year, highlighting seven local historic sites. By noon on Saturday, Oct. 10, more than 6,500 virtual visits were made both by local residents and people across the nation.

SALISBURY — This year’s virtual OctoberTour catapulted the rich history of Salisbury to a national audience after more than 6,500 virtual pageviews locally and across the nation by noon Saturday.

This year marks the 45th annual OctoberTour, hosted by the Historic Salisbury Foundation. The tour began at 6 p.m. on Friday, but visitors have until this evening to virtually view the local sites by going to Octobertour.com.

“We are absolutely blown away with the community’s support of this year’s OctoberTour,” said Historic Salisbury Foundation director Sada Stewart.

Stewart said comments from locals and others across the nation praised the digital tour with being accessible and easy to use. She added that some viewers this year are from New York, Ohio and Texas.

While the virtual and interactive tour this year is free to access, donations are still encouraged. Stewart said donations are coming in, with the foundation having raised a few thousand dollars by Saturday afternoon. On average, donors have contributed around the same price as past in-person tickets, which range from $25 to $30. Those donations are vital as OctoberTour is this year’s only fundraiser for the foundation.

The Heart of Salisbury, which provides yoga, wellness and kitchen space, comprises half of the historic building located at 120 E. Innes St. A.G. Peeler opened “Bamby Bakers” in 1905 within the building, and later expanded the site into a two-story retail space in the late 1950s. The city purchased the building as a downtown redevelopment project, and in 2005, two couples each purchased half of the building and have continued making restorations that keep with the industrial aesthetic of the upstairs apartments space and the downstairs art studio/gallery space.

The Jerome House is a two-and-a-half-story, 12-room Victorian landmark built by Thomas Jerome in 1901. It features a wraparound front porch, octagonal turrets and Doric columns. From 1936-75, the Queen Anne home was converted into a funeral parlor. The current owners purchased the home in 2005 and have since renovated the kitchen.

The Bell Block Building located downtown is a three-story building built by David Gaskill of Salisbury in 1898. Gaskill, along with his brother, operated a tobacco factory in Salisbury. The building has a Richardsonion Romanesque architectural style, and was purchased by the Loflin family from the Historic Salisbury Foundation in 1994.

The Snider-Floyd House, located in Spencer, is a one-and-a-half-story frame bungalow built by Robbie Snider, a fireman for Southern Railway, in 1925. It has an overall feel of an English cottage. The current owners are avid collectors of eclectic art and antiques, and they collect memorabilia related to the house and the railroad.

The Josephus W. Hall House was built in 1820 as a two-story Federal-style, two-rooms-deep frame house used by the girl’s department of Salisbury Academy. Dr. Josephus Hall, a hospital surgeon and surgeon in charge at the Salisbury Confederate Prison, purchased the home in 1859 and added a two-story front porch with cast iron oak leaf and acorn ornamental openwork, a gateway arch and square-edged clapboard. And between 1890 and 1910, the attic was enlarged with a high-hipped roof and dormers.

The Hall House is used for other foundation events, such as Blankets and Bluegrass.

The Morris House is a two-story Colonial Revival-style house designed by one of North Carolina’s earliest architects, Louis Asbury, in 1909. The current owners purchased the property from the Morris’ grandson in 2011 and have renovated the site. Following a fire in 1930, a bay window and sunroom were added to the original floor plan and the wood shingles were replaced with terra cotta.

Leah Campion, the foundation’s events coordinator, owns the Morris House. And though it’s difficult to list which parts of the house are her favorites, Campion said she that the outside has a traditional look while the inside features an eclectic range of styles. And she said despite its size, to her, it still feels “cozy and homey.”

She added that the rainy weather of the weekend makes her home ideal for virtual visits. And she was pleasantly surprised that it only took DKM Media about two hours to film a 360-degree tour of her home.

Another Colonial Revival-style site, the Stokes-Snider house, was built by Dr. Ernest Stokes, a resident surgeon at Salisbury’s first modern hospital, in 1919. The current owners, Andrew and Mary Walker, completed a full restoration of the house, and currently operate Across the Pond Bed and Breakfast in their home.

Stewart said hosting a virtual tour of some sort is something that could continue being a benefit for both a national reach. Additionally, some locals commented on social media that limited physical capabilities made the virtual tour more beneficial.

More than 30 items from the Ice House Architectural Salvage Warehouse are up for auction this year. Stewart said the virtual auction allows for buyers to make bids in a way similar to eBay, and a few items have already been sold. Items up for auction include auditorium seats, trunks, bathroom sinks, fireplace covers, mantels and stained transom windows.

Campion echoed Stewart’s remarks about the success of the virtual tour, adding that she’s happy the foundation was able to “take this leap” into continuing a familiar tradition, while also bringing awareness to the public about what the foundation does.