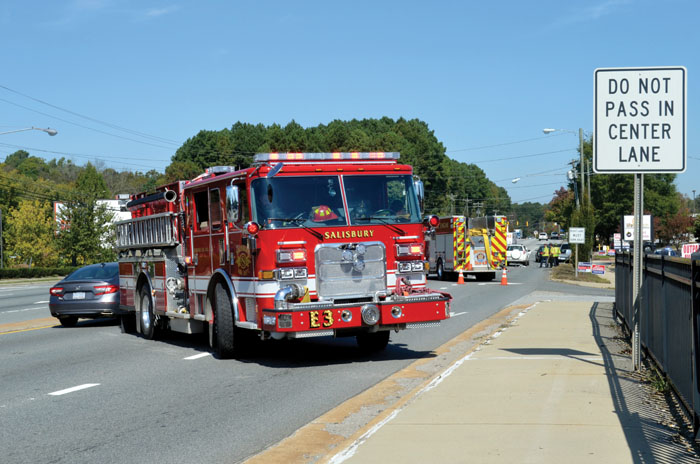 Salisbury firefighters use two firetrucks to block the roadway during a two-vehicle collision on Thursday on Jake Alexander Boulevard using a safety technique called shielding or blocking. Photo by Shavonne Potts, Salisbury Post.

SALISBURY — When Miller’s Ferry firefighters on Aug. 11 responded to Interstate 85 for a commercial vehicle fire, none expected they’d only have seconds to jump out of the way before a tractor-trailer plowed into one firetruck and caused damage to two others.

“They began to hear a loud noise, like something ran off the road and hit the rumble strips,” said Miller’s Ferry Fire Chief Josh Fox.

Responding firefighters quickly realized the oncoming tractor-trailer driver had struck a tanker and, like dominoes, the tanker slammed into a fire engine and that engine traveled 100 feet and hit a third fire engine.

The tractor-trailer caught fire and caused a diesel fuel leak that sent fire shooting underneath a Churchland Fire Department truck. Once the firefighters were all accounted for, they began to extinguish the fire and render aid to the tractor-trailer driver.

Fox credits the position of the trucks — a safety technique called shielding or blocking — with saving the lives of his fire crew. His department has been using large firetrucks on heavy traffic roadways for some time now as a 15-ton shield to protect the emergency responders.

“I think this would have been a different outcome, for our department, if we didn’t take the time to respond with multiple apparatuses on this call,” he said. 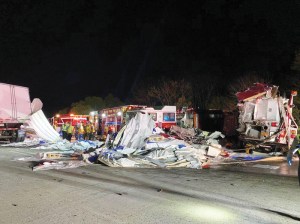 Because of the damage, the three trucks are expected to be out of service for a year or so, but Fox said said it they can be replaced. More important was that all responding firefighters were able to return to their families.

While the Miller’s Ferry incident showed the importance of a training technique, it raised awareness for other departments about the need to shield first responders on the roadway and proved the danger of responding to a roadway incident. Now, when firefighters respond to heavily traveled roadways such Interstate 85, Jake Alexander Boulevard or Innes Street, more than one firetruck will respond — one for the incident for which they were called and the other as a shield to protect responders and the victims involved in the incident.

“It’s basically a three-quarter of a million or a million-dollar shield. It’s a sacrificial lamb that’s being put out there to be struck,” said Salisbury Fire Battalion Chief Nick Martin. “Sometimes people get struck by a Honda, but when it’s a tractor-trailer at full speed like it was for the Miller’s Ferry Fire incident, you know, that will move a firetruck.”

Martin said the Miller’s Ferry incident is just one instance in an increasing trend of emergency services workers getting struck by vehicles while operating on roadways. He estimates more firefighters die as a result of being struck on the roadside than those who die while fighting fires.

Martin said local fire departments were using the shielding technique to some degree prior to the Miller’s Ferry incident, but local departments have recently increased their frequency of using the technique. Others are employing other safety tools and measures to protect themselves and victims. At Bostian Heights and Miller’s Ferry fire departments, for example, chiefs are looking at the possibility of purchasing portable speed bumps.

Fox said Miller’s Ferry also has purchased wireless headsets so firefighters can communicate with one another over the noise at accident scenes. 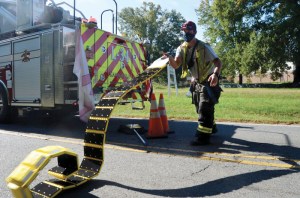 A Kannapolis firefighter unfurls a portable speed bump used to slow motorists down at an accident scene. The fire department has employed the use of these and other safety measures to protect personnel and victims of roadside collisions. Photo by Shavonne Potts, Salisbury Post.

One policy change at Miller’s Ferry is that all firefighters exit stationary trucks when they are parked. During the August crash, Fox said, some of the equipment like air packs came undone and were thrown through the truck’s window.

The Kannapolis Fire Department has launched an accident safety program designed to protect responders and people who may be disabled on the roadside. The program involves four key components — signage, lights, portable speed bumps and shielding.

Kannapolis Fire Chief Tracy Winecoff said at a news conference last week that, while first responders realize motorists are in a hurry to get to their destination, there is also a need to provide a barrier or level of protection for responders that are working on accident scenes.

He said the speed bumps are not to stop traffic, but to slow it down “so it makes the environment our folks are working in safer.” 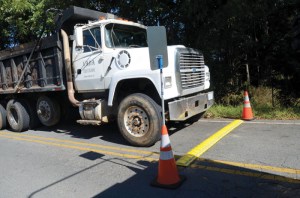 A dump truck drives over a portable speed bump. It’s just one of the tools the Kannapolis Fire Department uses to ensure its personnel stay safe while responding to roadside collisions. Photo by Shavonne Potts, Salisbury Post.

Winecoff said the Kannapolis Fire Department also started placing blue lights on the back of its trucks to help with grabbing the attention of motorists and keep firefighters safe.

One tool in place for quite some time and now being re-emphasized is the department’s traffic incident management system. Firefighters are all required to be certified so that they know what to wear to a scene and how to park the vehicle.

While there are lessons to be learned from the Miller’s Ferry incident, the result could have been worse without the help of safety techniques, Winecoff said.

The Miller’s Ferry Fire Department accident “drove home the importance of establishing that safety environment for our personnel,” Winecoff said.

Concord has also seen the first-hand benefits on putting blocking or shielding methods to work. In 2016, an impaired driver struck a Concord Fire Department ladder truck. At that time, the department had already been using the blocking method.

“It worked exactly like it was supposed to,” said Thomas Knox, chief of operations at Concord Fire Department.

There was a significant amount of damage to the truck but there were no injuries or fatalities. 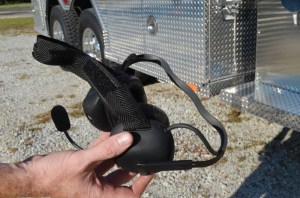 These wireless headsets are just some of the new tools that the Miller’s Ferry Fire Department is employing to make their roadside collision response much safer. Photo by Shavonne Potts, Salisbury Post.

“Life safety is our No. 1 priority whether it’s victims or the public or our personnel,” he said.

Knox said firefighters position Concord trucks diagonal on the roadway, taking up three lanes of travel, “so that we’re getting an extra lane of protection for everybody that will be working on that vehicle accident.”

“And it’s not just to protect our personnel, but we try to keep everything safe on the other side of that apparatus that’s shielding,” Knox said.

The fire department covers a large portion of Interstate 85, including south of Concord Mills Boulevard and toward exit 60.

Concord Fire Department also has trucks equipped with wireless headsets so personnel can better communicate over the noise at a scene. The department has employed a reflective chevron pattern, which is becoming more common on the back of firetrucks, to make them more visible at night.

The department’s newest fire engine also has blue lights that work when the parking brake is deployed if trucks have to stop on the interstate or highway. The light is similar to what motorists may see on a police cruiser.

The key to making sure fire personnel are able to go home at night comes down to good communication, Knox said.

He said it starts with the dispatcher providing details about the incident and what responders may encounter as well as the first fire unit on the scene communicating to other responders about potential hazards.

As for motorists, Winecoff noted fatigue, excessive speed, distracted driving or inattention as reasons for trends in injuries to and deaths of first responders. Most important is for motorists to pay attention. Winecoff said it’s not unusual to see motorists speeding past an accident scene or districted while passing by.

“They’ve got to really increase their level of awareness and their ability to pay attention. They’ve got to reduce their speed. Not only is that what we’re asking, but it’s required by law that they slow down and move over,” Winecoff said.

The move over law, which requires motorists to change lanes away from emergency vehicles on a multi-lane highway or slow down if doing so is not possible, only protects responders if the person is paying attention. In cases where motorists are not paying attention, tools such as speed bumps are used to help the person slow down.

“It’s not our goal to stop and deter traffic; it’s simply to slow people down when we’re there and working,” Winecoff said.

A violation of the move over law will result in a mandatory fine of $500 plus court costs, which was an increase from $250. Drivers can face a felony charge if the collision occurs that results in serious injury or death.