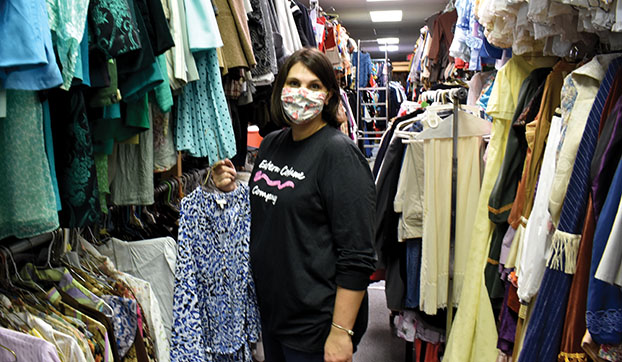 Ashley Ward prepares to hang up one of the thousands of costumes that hangs on the racks at Eastern Costume Company. The shop has been reorganizing for Halloween shopping. Ben Stansell/Salisburuy Post

SALISBURY — Ashley Ward is always excited for Halloween, but this year, she had even bigger hopes for the holiday.

“This year, in my mind, was going to be spectacular,” Ward said.

The success of Halloween, Ward said, typically depends on what day of the week it falls on. And in 2020, All Hallows’ Eve takes place on a Saturday.

That would typically lead to more trick-or-treating, more parties and more costumes, which is what Ward specializes in as the manager at Eastern Costume Company. Under normal circumstances, people would fill the shop’s many aisles in the weeks leading up to Oct. 31 to explore the thousands of outfits the store has to offer. This year will be different.

“We were really looking forward to people having big parties,” Ward said. “Then COVID hit. Even though I think people are still going to have parties, we are still renting, they can still come in, it will change the influx of people coming in.”

Eastern Costume Company has taken many of the same protocols as other businesses, requiring masks and encouraging social distancing, but due to the nature of the company’s operations, it’s had to take even more precautions.

Unlike many costume shops, Eastern Costume Company doesn’t have their costumes hanging in plastic bags for a customer to purchase in a hurry. Instead, almost all of their inventory is only available for rent. When a customer comes into the store, they may try on several looks before deciding exactly what they want, Ward said. Having customers try on costumes during a pandemic can be tricky, but Ward said they’ve implemented strict guidelines to ensure the health of shoppers.

“Once people try stuff on in our costume shop, the clothes have to go into quarantine for 36 hours if they aren’t washed,” Ward said. 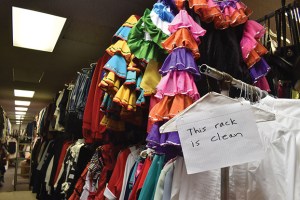 Eastern Costume Company has changed protocals to ensure that its costumes are properly sanitized after being worn or tried on by customers. Ben Stansell/Salisbury Post

Ward said they’ve also been operating on an appointment-only basis to cut down on the number of people in the store. That will change this week when the store goes back to normal hours to accommodate more Halloween shoppers. A large portion of the company’s business is supplying costumes to local theater productions, but October is always one of the store’s busiest times.

“For Halloween, people can come in and we can help them be who they want to be,” Ward said. “It’s fun for people to come in and explore what we have. You can turn around and find something new and fun anywhere you look.”

But this year, with some of the holiday’s usual traditions in question, Ward is not sure what to expect. In years past, her store has been a go-to for people attending grown-up costume parties like the Lee Street Theatre’s Clue Party, but Ward said that there likely won’t be as many of those large, guised events in 2020. She said many kids will probably still dress up, but that doesn’t mean they’ll be going door-to-door collecting candy.

“I still think kids will dress up, but it might be to visit a grandparent or something and then watch movies at home,” Ward said. “I’m hopeful, but I don’t have the answer.”

As Halloween draws closer, some organizations are coming up with creative ways for people to still celebrate the holiday. Downtown Salisbury Inc. is teaming up with the Salisbury Parks and Recreation Department to host a drive-thru trick-or-treat event on Halloween day. 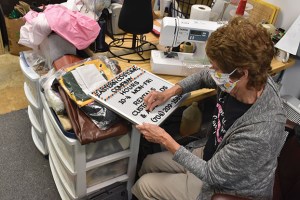 Carolyn Glasgow prepares a door sign that announces that the shop is returning to regular hours in the weeks leading up to Halloween. The shop has been operating on a appointment-only basis. Ben Stansell/Salisbury Post

While Halloween may not give Eastern Costume Company the bump it’s used to, the business has seen an uptick in orders for themed weddings, which Ward said has become somewhat normal in recent years. This fall, weddings where the bride and groom say “I do” while dressed in colonial clothing or in steampunk fashion have been one of the shop’s main sources of business.

“That’s been the biggest thing,” Ward said. “We’re seeing more events like a wedding rather than the big block parties or frat parties.”

Carolyn Glasgow, an employee at Eastern Costume Company, said that they’ve also stayed busy by working on costumes for theater productions and common alterations for clients.

Ward does expect holiday shopping to pick up in the coming weeks and said she hopes Eastern Costume Company can provide an escape for customers.

“That’s what the costume shop is, you can leave your worries at the door, become something else and have fun with it,” Ward said.