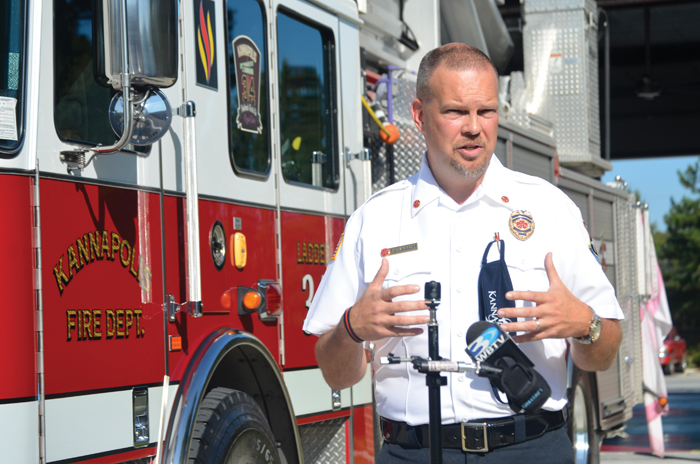 SALISBURY — This year, there have been 38 emergency responders, law enforcement and tow service personnel killed nationwide by vehicles while responding to roadway collisions, according to data collected by the Emergency Responder Safety Institute.

The institute was created as a committee of the Cumberland Valley Volunteer Firemen’s Association in Pennsylvania.

“We’ve been looking at these types of incidents for 20 years. After the untimely death of two responders in 1990 on the highway we decided our association would focus on the problem of emergency responders being struck on the highway when helping others,” said Steve Austin, a project manager of the Cumberland Valley Volunteer Firemen’s Association Emergency Responder Safety Institute.

The nonprofit institute, which established ResponderSafety.com, is the only known organization that tracks responder fatality incidents and near misses. The institute’s members also serve as an informal advisory panel of public safety leaders. In the ’90s, there was little talk about these safety issues, particularly related to people who were struck on the side of the road, unless the local media reported the incidents, Austin said.

The institute soon became trainers, advocates and information sharers of “struck-by incidents,” which it tracks every day.

“A lot of it happens because people aren’t paying attention when they’re driving. Distracted driving has come to the forefront of one of the major causes of responders being struck on the roadside,” Austin said.

The use of devices and cellphones continues to be a vexing problem causing a lot of these incidents to occur, he said.

The Aug. 11 Interstate 85 collision that resulted from a fatigued tractor-trailer driver who plowed through three Miller’s Ferry firetrucks is just one among 44 roadside incidents listed this year on the website.

Fire Chief Josh Fox said he spoke with Jack Sullivan, a senior consultant with the institute, following the crash. The two spoke about the incident and what steps the department will take. Fox said he would like to talk to opinion and policy leaders about responders who lose their lives in roadside incidents and the financial impact to the municipality or department that paid for the apparatuses and vehicles.

Other North Carolina incidents noted by the website include:

• In 2019, a N.C. State Highway Patrol trooper was injured by a vehicle while pulling a motorist over on the roadside.

• In 2018, there were two incidents reported to the institute. One of which occurred when Buck Shoals Volunteer Fire Department truck was used as a blocker on an accident scene and sideswiped by a vehicle on Interstate 77. The Buck Shoals department is located in Yadkin County.

• In 2017, a collision involving a Concord firetruck is listed as one of four incidents compiled by the institute. The fire department and highway patrol were using a truck and cruiser to block the roadway when a passenger car sideswiped the firetruck.