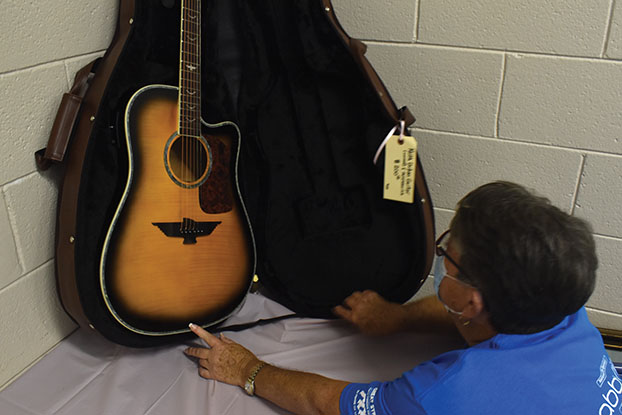 Kaye Hirst examines an unusued Keith Urban guitar, one of the many items available for purchase at the Cystic Fibrosis Yard Sale. Ben Stansell/Salisbury Post

SALISBURY — Perched in the corner of a gymnasium filled with tables and treasures, Kaye Hirst watched over shoppers Friday afternoon as they browsed the many items available for purchase at Helen Brown’s cystic fibrosis yard sale.

To Hirst’s left was a collection of knives, some decorative, others functional, and to her right sat an unused Keith Urban guitar, still in its case.

Hirst has volunteered at the yard sale for several years, but never before has she seen so many items. In the past, the yard sale has been a bi-annual event, occurring in both the spring and the fall. But this year, Brown was forced to cancel the May sale due to health concerns regarding COVID-19. Although the sale did not go on as scheduled, people continued to donate items, leading to an excess of everything from books, to model trains and even patio furniture. 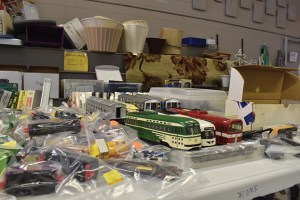 The CF Yard Sale’s inventory changes every year depending on what people donate. This year, a large collection of model trains was given to the cause. Ben Stansell/Salisbury Post

A glut of belongings is good news for Brown because it means she can raise more money for cystic fibrosis research, a cause that’s personal for her since two of her grandchildren have cystic fibrosis.

Cystic fibrosis is a hereditary disorder affecting the exocrine glands that causes the production of thick mucus, leading to the blockage of the pancreatic ducts, intestines and bronchi. It can often result in respiratory infection and there is no known cure.

Brown started the yard sale in her own backyard more than 15 years ago when her granddaughter, Anna, told her that she was going to raise money to benefit research on the disorder affecting her.

“When my oldest granddaughter was in junior high school, she said that she wanted to raise money for cystic fibrosis,” Brown said. “I thought having a yard sale would be one of the easiest things to do. That’s why I started it. I thought that if she could raise some money, then I could raise a lot more.”

Since then, the yard sale has outgrown the yard and moved to the gymnasium in First Baptist Church’s Family Life Center.

“I never expected it to get this big when I started it in my backyard all those years ago,” Brown said.

Brown said that since relocating to the gymnasium, there have been times when more than 50 people have packed the building to rummage through tables covered in toys, trinkets and more. This year, however, they’re only allowing 20 customers into the gym at once to follow social distancing guidelines. Masks are required and all of the items available have been properly sanitized since being donated. The sale is also set up so that customers can only walk down aisles one way. 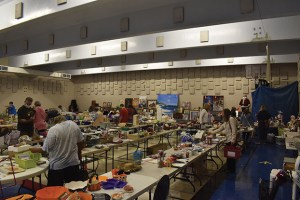 Customers at this year’s CF Yard Sale were required to wear masks and could only walk one way down the aisles to promote social distancing. Ben Stansell/Salisbury Post

Brown said that she hopes the new protocols don’t hamper shoppers because she has a lot to sell. It’s always surprising, Brown said, to see the objects that people donate.

“I’m just in awe of what people give me to sell,” Brown said. “It’s been some really good things, which has allowed us to raise a lot of money.”

In total, the yard sale has raised over $300,000 for cystic fibrosis research, Brown said.

“They’ve made a lot of progress (with research for) cystic fibrosis and I’d like to think that what we’ve raised has had a little bit to do with that,” Brown said.

This year, Brown and her group of volunteers will have even more days to raise money. Due to the surplus of items, Brown has expanded the sale to cover four days over two weekends. New items will be placed out on the tables for the second weekend. The sale will open from 8 a.m.-4 p.m. on Friday and 8 a.m.-2 p.m. on Saturday at the First Baptist Church Family Life Center, lower gymnasium.