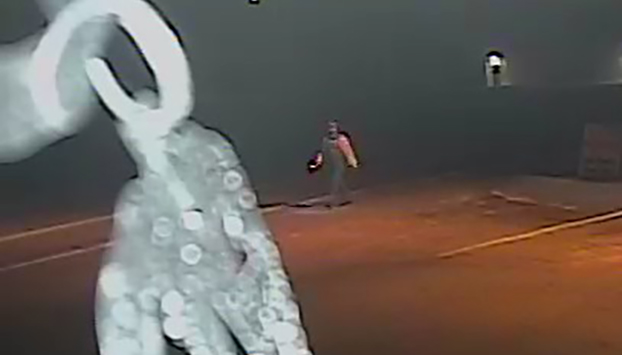 This video still, from Pop's General Store, shows a person of interest in an intentionally set fire at a nearby church on U.S. 601.

SALISBURY — The Rowan County Sheriff’s Office has released an image of a person of interest in an intentionally set fire at Franklin Baptist Church on U.S. 601.

The man is pictured in a still image from a video taken at Pop’s Country Store, which is also located on U.S. 601 and in the Franklin area. While the image is low quality, the Sheriff’s Office said a witness described the man as white male wearing tan overalls and a cap with sandy-colored hair coming out from under the hat. The man appeared to be sweating, the witness told deputies. A witness described the man as appearing to be in his late 20s.

The Sheriff’s Office says it wants to talk to the man in reference to an arson that occurred at 10:30 p.m. Tuesday at Franklin Baptist Church, 3810 U.S. 601. A fire that was accelerated with gasoline damaged the outside of the building, including near the roofline, an exterior door, window and landscaping around the church.

The man was last spotted walking on U.S. 601 toward the Davie County line.