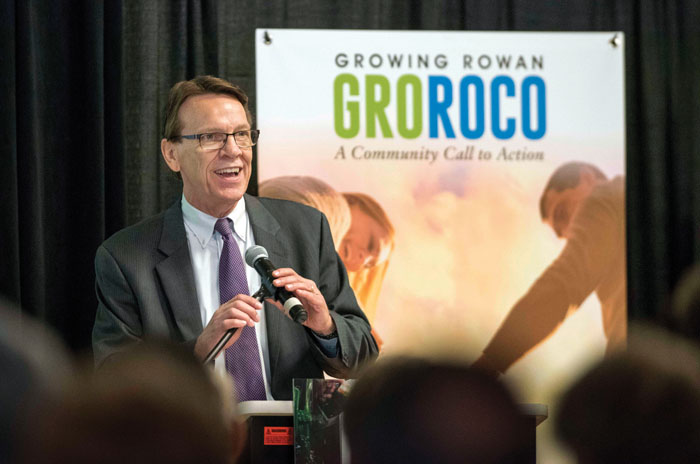 SALISBURY — The Rowan County Economic Development Commission didn’t allow a pandemic to stop it from raising over $1 million for its “Forward Rowan” campaign.

The EDC this week announced it exceeded its fundraising goal by raising $1.12 million by the time that the campaign concluded on Sept. 30.

The organization surpassed its $1 million target despite having to pause the campaign for several months due to COVID-19. After beginning in January, the campaign was halted in April and remained in limbo for several months. When it resumed in August, the EDC and its fundraisers were forced to adjust to their fundraising tactics, implementing more Zoom meetings and virtual fundraising strategies.

“We did have to suspend it and we did have to adopt some different methods to conduct the campaign and to deal with the restrictions that were placed on us,” said Rod Crider, the president and CEO of the EDC. “We were able to do that and were able to exceed the goal we had for the campaign, so we’re very pleased.”

Forward Rowan marks a transition in the EDC’s funding structure. In the past, the group has largely been funded by local governments, but Crider said that the new public-private model will better help the organization achieve its goals for generating economic activity in Rowan County.

“The pitch is essentially that in order for us to move Rowan County forward, we have to have a stronger economic development effort and one that includes the private sector,” Crider said. “For the most part, our funding has come from public bodies. The private sector was not invited to participate in this effort. We feel the best practices for economic development organizations are those that are structured as a public-private partnership.”

To hit its fundraising target, the EDC recruited some of the county’s major businesses. Among the list of Forward Rowan sponsors are Food Lion, Henkel, New Sarum Brewing, Innospec and Novant Health. Crider said that, by investing in the EDC, the campaign’s sponsors will see future benefits.

“We were able to articulate that we were putting some real value out there,” Crider said. “It wasn’t a pitch for philanthropy. We don’t want people to donate money to us as a charitable cause, we want them to do it because they see value for their company in this effort.”

The money raised during the campaign will be utilized by the EDC to accomplish four major goals: promote economic growth and expansion, attract talent, bolster the EDC and Rowan County’s brand identity and marketing and improve the EDC’s online presence and capabilities.

Greg Edds, who served as Forward Rowan’s campaign co-chair, said he was excited with the results of the campaign.

“We are so proud of our community and how the businesses continue to support initiatives that make a difference in Rowan County financially,” said Edds, the Rowan County Board of Commissioners chairman. “It is a great day for Rowan County. The EDC has a solid plan to attract jobs and industry, and our businesses want to help them do it.”

“If we are going to have the strongest possible economic development program, it’s going to take business leadership,” said Fisher, F&M Bank’s CEO and chairman. “Establishing this new public-private partnership will make Rowan County even more competitive for new jobs and investment.”