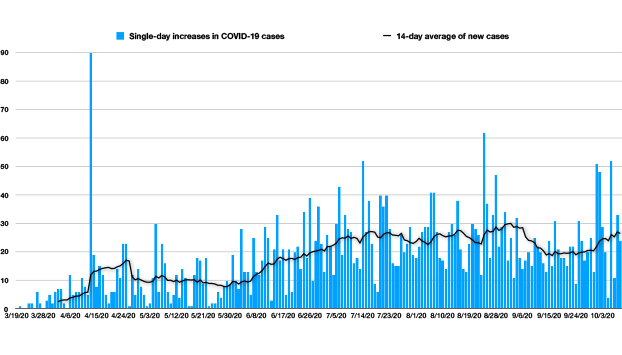 This chart shows the progression of COVID-19 cases in Rowan County, with the blue bars showing daily increases and the black line showing the 14-day trend in cases.

The death occurred outside of a nursing home, making it the 36th such death among Rowan County residents. There have been 70 deaths in nursing homes, and the Citadel on Julian Road still represents the largest single source of deaths among nursing homes.

The N.C. State Veterans Home has seen the second-deadliest outbreak, which has since been declared over, at 15 deaths. Deaths at Liberty Commons on South Main Street have grown to 12.

The average age of the dead is 80 — a number that remains higher than the age of those who have been hospitalized (64) or those testing positive (43.8)

As of Friday, there had been 3,659 positive tests in Rowan County, which includes 432 cases considered active, according to the Health Department. State data show a higher total of cases — 3,708.

While there have been 241 Rowan residents hospitalized in 2020 because of COVID-19, there were 18 in hospitals on Friday. Roughly 85% of positive cases are now considered recovered.

Across the state, there have been 227,431 cases, a number that’s grown at slightly faster rate in the previous week than the month of September. There were 1,065 people hospitalized across the state on Friday and 3,747 dead.

Across the state, there have been 3.3 million completed tests.