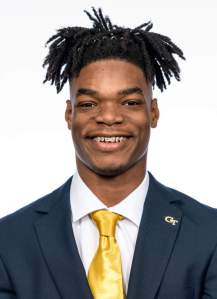 By CHARLES ODUM AP Sports Writer
ATLANTA  — Jeff Sims threw a go-ahead 19-yard scoring pass to Jahmyr Gibbs midway through the fourth quarter and Georgia Tech rallied from a two-touchdown deficit to beat Louisville 46-27 on Friday night.
Louisville running backs lost three fumbles while Georgia Tech did not commit a turnover.
Javian Hawkins ran for 155 yards for the Cardinals but his fumble in the fourth quarter was costly. Jordan Domineck’s recovery near midfield set up Sims’ scoring pass to Gibbs, who vaulted defensive back Isaiah Hayes at the goal line to give the Yellow Jackets a 32-27 lead.
Georgia Tech (2-2, 2-1 Atlantic Coast Conference) snapped a two-game losing streak. Sims, a freshman, passed for 249 yards with two touchdowns, including a 34-yard scoring pass to Malachi Carter to extend the lead with less than three minutes remaining. Dontae Smith added a 12-yard scoring run in the final minute.
Louisville (1-3, 0-3) suffered its third straight loss despite a strong effort by quarterback Malik Cunningham, who passed for 229 yards with two touchdowns and ran for two scores.
Cunningham did not throw an interception. It was a dramatic return to form for the junior quarterback, who threw a career-high three interceptions and was sacked seven times in a 23-20 loss to Pittsburgh on Sept. 26. Before the loss to Pitt, Cunningham had never thrown more than one interception in a game.
Cunningham completed scoring passes to Marshon Ford and Tutu Atwell. His second touchdown run, an 11-yarder late in the third quarter, gave the Cardinals a 27-26 lead.
Georgia Tech trailed 21-7 before suddenly finding its offense in the final minute of the first half.
Sims completed a pass to Gibbs for 41 yards, starting a string of three consecutive completions that moved the Yellow Jackets to the Louisville 9. Sims then handed to Ahmarean Brown on an apparent reverse before Brown, running right, stopped and passed to Jalen Camp for a touchdown.
Louisville running back Hassan Hall lost two fumbles, including one on a kickoff return that was forced and recovered by Bruce Jordan-Swilling. The play set up Sims’ 22-yard scoring run for a 26-21 lead in the third quarter. Sims ran for 64 yards.
Louisville cornerback Marlon Character was called for targeting and ejected following a hit on Adonicas Sanders in the third quarter. Character lowered his helmet before the big hit on the sideline following Sanders’ 33-yard gain.
THE TAKEAWAY:
Louisville: Hawkins’ runs and Cunningham’s dynamic leadership provided a strong base for the Cardinals. It was not enough to overcome the three lost fumbles by the running backs as turnovers were decisive for the second straight week.
Georgia Tech: Mistakes, including false starts and the blocked extra point on a low kick by Gavin Stewart, continue to hurt the Yellow Jackets. Even so, Sims continues to show promise as the new leader of an improving team.
UP NEXT:
Louisville will play its third consecutive road game when it visits No. 5 Notre Dame on Oct. 17.
Georgia Tech faces a big challenge when No. 1 Clemson visits Bobby Dodd Stadium on Oct. 17.