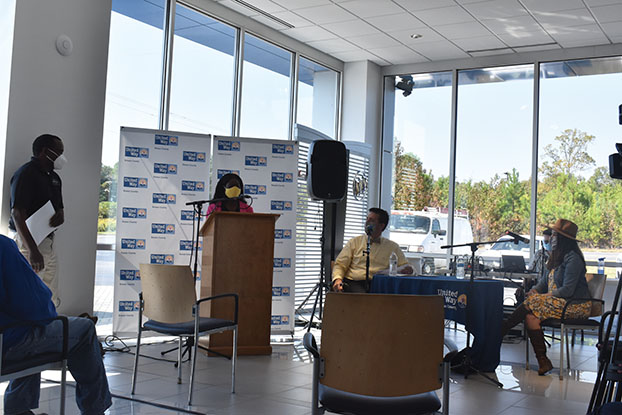 Kaisha Brown reports that the public employees division has raised $91,226.89 so far, which is 76.3% of its goal for the 2020 United Way campaign. Ben Stansell/Salisbury Post

SALISBURY — For having to fundraise during a pandemic, campaign chair Andrew Smith says he’s thrilled with the Rowan County United Way’s progress.

People gathered both in person and virtually Wednesday afternoon to hear an update on the United Way’s 2020 fundraising campaign. The event was held at the Team Chevrolet car dealership and was broadcasted live on Facebook and Youtube. The progress report was delivered by Smith and United Way Executive Director Jenny Lee in the format of a zany radio talk show.

“We’ve been keeping metrics against last year and we appear to be ahead of last year, which is a great thing,” Smith said. “It was part of our internal plan that we knew we needed to get out soon since we’re in a pandemic and there’s a lot of instability in the world right now.”

Smith chalks up the campaign’s early success to the hard work of its volunteers as well as innovative tactics that they’ve implemented due to COVID-19. Along with broadcasting fundraising events live on social media, Smith said that some of the fundraising has been done completely virtually.

“We are now doing some virtual giving, which is not something we’ve ever done before,” Smith said. “Some of our campaigns are completely remote, so people are not coming together. We’ve had to change our approach. It’s always been these triplicate forms, but now it’s digital.”

Smith said that he thinks some of the new fundraising strategies might stick around, even once the pandemic has abated.

“Frankly, I think that some of the innovations that are required because of COVID and this restraint are some of the ones that we’ll use forever,” Smith said. “The hope is that we build strong systems this year in the middle of a pandemic that will allow us in future years to run an even better campaign.”

To reach its $1.5 million goal, the United Way split its fundraising efforts into 13 different divisions, each of which is headed by a cabinet member. Of those 13 divisions, seven have already raised over 50% of their individual fundraising targets.

During the event, representatives from Rufty-Holmes Senior Center gave attendees a sneak peak at a new program that was made possible by funding from the United Way.

“We’re partnering with a national program called GoGo Grandparent,” Rufty-Holmes Executive Director Nan Buehrer said. “It is utilizing Uber and Lyft drivers to provide transportation to older adults. It’s going through Rufty-Holmes who will be monitoring and making those reservations to make sure those seniors are safe and get to where they need to go.”

Rufty-Holmes is preparing to pilot the program and hopes to roll it out fully by the end of the year. Rufty-Holmes is one of the United Way’s community investment partners and receives funding from the organization to help implement programs like GoGo Grandparent that help seniors in Rowan County.

Lee said that it’s organizations like Rufty-Holmes that will benefit from money raised during the 2020 campaign.

The next United Way report meeting will be held on Oct. 21 at the Gerry Wood dealership. Once again, it will be broadcasted live on Facebook and Youtube. For more information on Rowan County United Way and the 2020 campaign, go to www.rowanunitedway.org/.