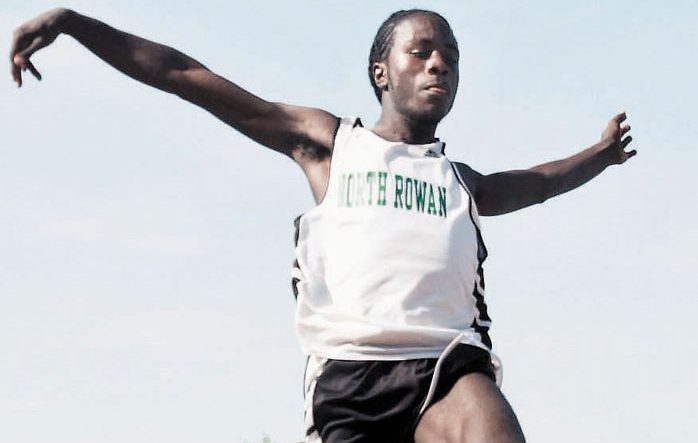 Andre Tillman soars in a jump, which was among track activities since he didn’t grow as fast early in high school and his mother was worried he’d get hurt playing football. Salisbury Post file photo by Joey Benton

SALISBURY — A natural when it came to jumps and sprints, track and field phenom Andre Tillman loathed the grind of the 300-meter hurdles.

Hurdles would be the tool to push the talented youngster to be all that he could be.

“When I was a sophomore I was county champion in the 300 hurdles, but Coach Steele challenged me to become a state champion in that event because he knew I didn’t like running the hurdles much,” Tillman said. “So I did work at it and I improved my times. Coach Steele could connect with you on almost a parental level. He got to know you. He learned what made you tick. He knew what made you go.”

By his junior year, Tillman was state runner-up in the hurdles. Steele kept a poker face, but inside he was smiling. He knew what was coming.

Steele kept pushing the right motivational buttons, and on May 14, 2004, Tillman secured a 2A state championship for the Cavaliers at N.C. State by winning — you guessed it — the 300 hurdles. Tillman and teammate Sebastian Rankin finished 1-2 in that event.

That was a major moment in Tillman’s life because Steele, who had come to North Rowan in 1986, had announced he was retiring after the state meet. That championship. achieved with two of their top guns sidelined, was the Cavaliers’ second in a row.  They did it with 11 top-three performances. It was Steele’s 12th state title at the helm of North boys track and field — seven outdoors, five indoors.

“When we were coming up, we always heard about North Rowan track and the legends like Brian Ellis and Greg Yeldell,” Tillman said. “You didn’t want to be the ones that let Coach Steele down and didn’t represent the program. It’s almost like it was your duty to win, to carry on the legacy.”

Tillman’s mother got him involved with Steele and the Rowan Express Track Club early. His older brother, Darnell, was a track guy, so Andre was running for the Express by the time he was 6.

But Tillman’s dreams at that point were mostly football dreams. Speed kills in both sports, but football tends to bring more glory, more ink and more attention than track and field.

“Football, that was the first love,” Tillman said. “I’d started jumping in track in middle school, but football was still the biggest thing for me.”

The problem was he wasn’t growing much, at least in terms of weight. His mother was worried he’d get mangled and broken on the gridiron, so from the ninth grade through the 11th grade, he turned his attention exclusively to track and field.

There were plenty of reasons to believe he’d be successful. Darnell, had won a triple jump state title for the Cavaliers in 1999. Andre had a lot of the same stuff.

The confidence breakthrough for Tillman  came in the summer of 2001 between his freshman and sophomore years at North. Competing in Norfolk, Va., he won the adidas outdoor national championship in the triple jump.

As a sophomore, Tillman was a big factor in the 2002 Rowan County Championships and was named MVP for field events. He was first in the long jump and 300 hurdles. The triple jump was interesting, as he was dueling with Mark Sturgis Jr, who was at West Rowan then, as well as Salisbury phenom Cathcart. Tillman placed second behind Sturgis.

“The triple jump requires speed, but it’s a sport where technique is even more important than speed,” Tillman said. “It takes time to perfect the technique, and Coach Steele was great at teaching it.”

The triple would become Tillman’s main event, as the latest in a long line of triple jump prodigies developed and nurtured by Steele.

In the 2002 2A state meet, Tillman had a fourth in the long jump, a fifth in the 300 hurdles and placed eighth in the triple jump.

Tillman kept making strides, especially in the triple jump, in the summer of 2002.

He was named an All-American in the AAU Nationals held at Stanford. Then he won his second adidas outdoor national championship at N.C. State, topping a stellar field with a leap of 48 feet, 11.5 inches.

Tillman’s first official NCHSAA state title would come indoors in Chapel Hill in 2003 when he won the long jump with an effort of 23 feet, 1.25 inches. The indoor track state championships included all classifications then, so North team’s title was an impressive feat. Tillman nearly won two individual events, but classmate Terry Wood topped him in the triple jump.

In the 2003 outdoor championships, Tillman was instrumental in North’s state title with a second, two thirds and a leg of the winning 4×200 team.

Preparing for his senior year, Tillman got after it in the summer of 2003 harder than he’d ever worked before. Running hills and doing strength training for the first time.

Putting in that extra sweat led to the entire 2003-04 school year being a dream sequence for Tillman.

Sturgis Jr. had transferred from West to North Rowan for that senior year and the jumping competition in practices and meets between Tillman, Wood and Sturgis may have been at a level that no other high school track team in America has ever experienced.

“Everybody was good, but everybody was also close,” Tillman said. “If I won an event, they were happy for me, and I was happy for them when they won, and we all won some. We pushed each other to excel.”

In the 2004 Rowan County Championships, Tillman nearly had a perfect meet, winning the long jump, 300 hurdles and running on the first-place 4×200 relay. Nearly perfect  because Wood soared past the 50-foot barrier to edge him in the triple jump.

In the 2004 2A outdoor championships, North competed without Wood and relay man Lanard Colbert. But Tillman got that 300 hurdles title Steele had challenged him to get in 38.55 seconds, three seconds faster than he was running as a sophomore.  He also won his first outdoor state title in the triple jump.  He ran the second leg on North’s winning 4×200 relay team. In the long jump, he placed second behind Salisbury’s Brandon Cathcart. Tillman was state meet MVP and made sure Steele went out on top with another state crown.

The nation’s top-ranked indoor triple jumper and the state’s best outdoors, Tillman was named 2004 Gatorade Athlete of the Year as North Carolina’s premier track and field performer. That was an award North’s Ellis had won in 1991 and that Yeldell had won in 1997 and 1998. North’s Latasha Pharr had won the Gatorade award for girls track and field in 2000 and 2001.

Late in the summer of 2004, Tillman claimed his third adidas national title in the triple jump to go along with his championships in 2001 and 2002.

“That made me the first and only male from North Carolina to win three national titles in the same event,” Tillman said.

Out in Iowa, he added a championship in the long jump in the AAU Nationals (Junior Olympics) with an effort of 23-10.5.

“My senior year could not have been any better,” Tillman said. “And Coach Steele helped me get to college, as he did so many other North athletes.”

Tillman was being recruited by larger schools, but St. Augustine’s College in Raleigh, where coach George Williams had built a nationally dominant Division II track and field powerhouse seemed like the ideal fit. This was 2004 when Williams was the head coach of the U.S. Olympic track and field team.

Tillman didn’t make it to the Olympics, but he looks back on his college career with pride.

He was a Penn Relays champ, a conference champ, a member of national runner-up teams and a college All-American. He placed third in the triple jump in the D-II national meet held at J.C. Smith in 2007.

There’s one more important facet of Tillman’s high school story that illustrates what kind of athlete he was.

As a senior, he decided it was time to play football, and even though he hadn’t tried the sport since middle school he made an impact for the Cavaliers as a receiver.

“Senior year, last hurrah, so I decided to go for it,” Tillman said. “Everyone looked at me solely as a track kid, so I surprised people. I did pretty well.”

Tillman is back in Rowan County now. He’s done some volunteer coaching and plans to do more in the future.

He hopes to be able to provide the same sort of motivation and mentoring that Steele gave him years ago.

“I had a great coach and I worked hard,” Tillman said. “I had some special moments.”