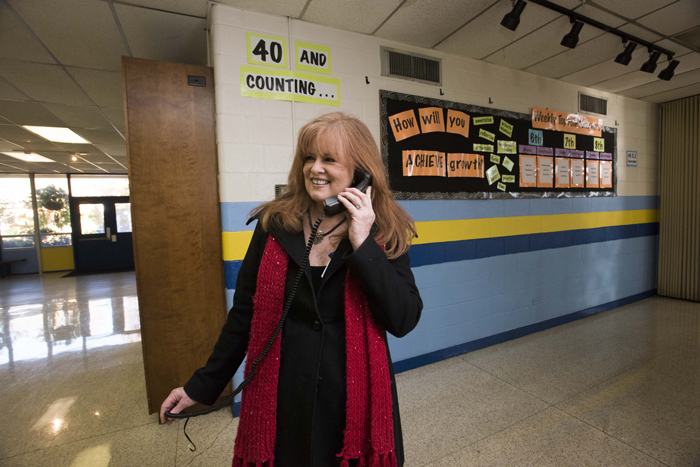 SALISBURY – Being the voice that tells kids there is no school because of snow is just one part of Rita Foil’s job, and she isn’t sure what the future holds for snow days either.

She is preparing to retire on January 1 after a career with stops at the school system and in county government. Foil pointed to the COVID-19 pandemic as the most remarkable time of her career because she saw the district pull together to overcome the constant curveballs. The pandemic has changed how school districts across the world do business, and she wonders if there will ever be more snow days as she wraps up a long career in public service.

In particular, she also wonders if the new superintendent will decide to call off schools on snowy days because Rowan-Salisbury Schools is more well-equipped than ever to teach students from home.

While students know her best as the voice of freedom on snowy days and parents as the voice for all-call announcements from the district, Foil spends most of her time as public information officer — pushing out the district’s other information to families and coordinating with media outlets.

She knows the snow fairy moniker is lighthearted, but it’s major responsibility for the superintendent to make the call to close schools for weather.

“I hope that maybe in some way I made a difference in the lives of children,” she said. “Sometimes it brings tears to my eyes knowing that I’ve had this amazing and heartwarming privilege.”

Her favorite thing about the job is serving children, but she’s looking forward to having more time to spend with her own three children and six grandchildren.

Foil said retirement will give her more time to spend with her family and more energy when she is able to see them. The nature of the job goes beyond a typical nine-to-five, and she is also hoping to get back to some traditions that have fallen by the wayside recently.

“I used to cook every Sunday and bring them all over,” Foil said. “COVID kind of changed that just a little bit. We haven’t gone back to that routine yet.”

Foil said retirement is not a decision she made at the last minute.

“You plan and plan and plan,” Foil said, adding she had already decided to retire this year and wait until October to make the announcement. Foil said Superintendent Lynn Moody’s announcement a few weeks ago was just one more sign from God that it was time.

Foil spent more than 10 years working for county government before she was hired at RSS by former superintendent Judy Grissom. She jokes that Grissom invited her in but Moody let her stay. She credits her faith and relationship with God for guiding her through life.

Foil said she will miss everyone and will be cheering the district on as she sees what they accomplish in the years to come.

She gave special mention of her working relationship with Assistant Superintendent of Transformation Andrew Smith, who pulled together people from other departments to work on marketing the district.