SALISBURY — A Lexington man faces several traffic infractions after being accused of breaking a law enforecement officer’s patrol car window and nearly hitting two others during a Tuesday vehicle pursuit across multiple counties. 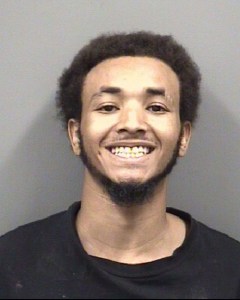 The chase began in Forsyth County contrary to earlier reports that it began in Davidson County, according to a press release from the Lexington Police Department.

Once the pursuit entered into Rowan County, the other officers discontinued the pursuit, said Rowan Sheriff’s Maj. John Sifford. Sifford said the chase continued onto Interstate 85 at Innes Street, traveling 100 mph. Boston was traveling in a white pickup without headlights on, he said.

The chase began around 3 a.m. Wednesday after it was reported that Boston broke a window on a patrol vehicle and nearly hit two Lexington officers head-on from a vehicle, Sifford said.

Then, Sifford said, Boston began flashing his headlights in what deputies perceived to be taunting.

Other deputies joined in the pursuit, which continued until the driver attempted to get off the interstate at exit 58 into Cabarrus County. He was traveling too fast and continued across the top of the off-ramp and onto the other side. He came to rest in the grass, Sifford said.

He got out of the truck and attempted to run but was apprehended about 40 yards away.

He remains in the Rowan County Detention Center under a $50,000 secured bond and faces pending charges in Forsyth and Davidson counties.

Anyone with information related to this investigation is asked to contact Lexington area Crime Stoppers at 336-243-2400.