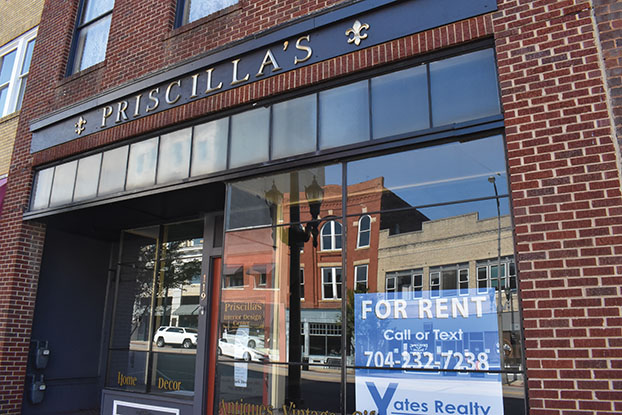 When Priscilla Clark started renting her location on West Innes Street two years ago, she renovated the building's facade and intorior. Clark said that she left the building ready and in good shape for a new tenant. Ben Stansell/Salisbury Post

SALISBURY — It was a bittersweet moment for Priscilla Clark to see her space on West Innes Street completely barren.

On Saturday, Clark moved the last remaining merchandise out of the store she’s called home for the past two years, leaving the once-full building devoid of the vintage treasures she’s become known for.

“I put a lot into the building,” Clark said. “I did a lot of renovations to it and I rehabbed the facade, so I’m really leaving a piece of myself behind.”

Clark opened Priscilla Clark Designs on West Innes in 2018. Since then, she’s been selling antique and vintage furniture, fixtures and decorations while also using the space as a homebase for her interior design consulting services.

Clark is not shutting down her business, only moving her operations to a historic building in downtown Mocksville that she purchased and is currently renovating.

The move marks a transition for Clark, who has worked as an artist and designer for much of her life.

“I made the decision with the move to focus more on the interior design aspect of the business,” Clark said. “The store has just been secondary, so I won’t have just a retail store anymore where you can drive up and pop in whenever you want to.”

Clark’s new location will feature a design studio that clients can visit by appointment to see sample fabrics and make design selections for their homes or businesses.

While the retail side of her business is curtailed, Clark said that she is considering the idea of hosting “pop-up market” events several times a month that will allow customers time to browse her inventory at their leisure. Clark sold off much of her merchandise during a move-out sale, but saved some of her “best” pieces, which she will move to her new location.

When Clark began exploring the option of moving off West Innes Street last year, she looked for vacant spaces in Salisbury, but couldn’t find property that was both historic and zoned for commercial and multipurpose use. Eventually Clark found exactly what she was looking for in Mocksville.

“I was fortunate enough to get an old, two-story Victorian house right next door to the Davie County jailhouse right on Lexington and Main Street,” Clark said. “It’s a really good location.” 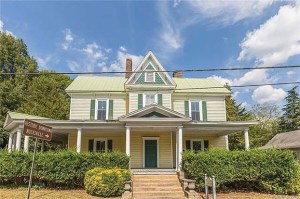 Clark will be moving her operations to a historic home in downtown Mocksville, where she will focus primarily on her interior design business as opposed to retail. Photo submitted.

Clark will both live and work in the historic home.

By moving to Mocksville, Clark said she will expand her reach without leaving behind the customer base she’s cultivated in Salisbury.

“I can service practically anywhere within a 40-mile radius,” Clark said. “It’s not really a big deal where I am because a lot of my business model is going to clients and meeting in their homes. I still plan on servicing the Salisbury area. I’m just expanding.”

Although Clark is leaving Salisbury, Downtown Salisbury Director Latoya Price said that her presence will be felt for years to come.

“I’m excited for Priscilla and her new adventure,” Price said. “I’m sad for her to leave, but she will still be serving our community in Salisbury even though she’s moving to Mocksville. There’s a part of her that’s still here.”

Price said that many of Clark’s pieces have made their way into other businesses downtown like Timeless Wigs and Marvelous Things. Clark also designed the facade of the building on East Innes that used to house Oxford + Lee.

Dileika Wilson-Ballard, the co-owner of Timeless Wigs and Marvelous Things, said that she will miss having Clark as a neighbor, but thinks that the space Clark is leaving behind could be a coveted property for a future tenant.

“Priscilla did a lot of work on that building,” Wilson-Ballard said. “From where it started, it’s amazing what she was able to do in there, from the floors to the front of the building to everything that she did inside. She definitely left it a lot better than what she found it.”

Clark is currently renovating her new office and home and will update progress via her Facebook page.

For the previous several days, volunteers have been working to strip peeling paint from a fence around the Utzman-Chambers house... read more

Planning board talks through new rules for solar farms

Ask Us: What are plans if hospitals reach COVID-19 capacity?

Political Notebook: Rowan Board of Elections receives more than 60,000 pens for voters