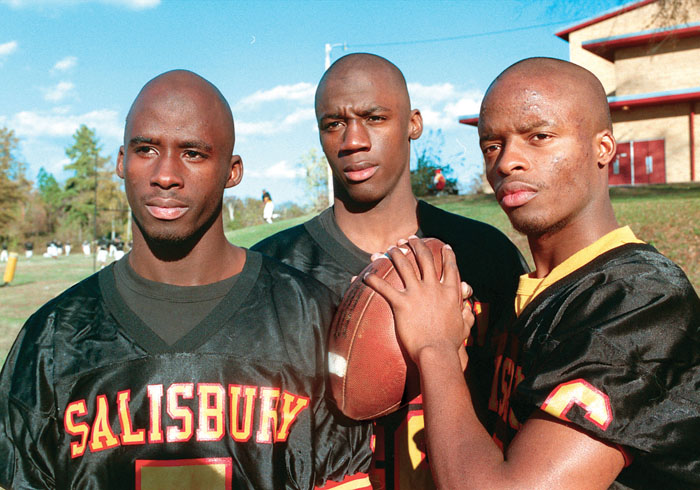 SALISBURY — They fell in the third round of the 2A state playoffs, so they get overlooked, but 25 years ago, the Salisbury Hornets assembled one of the county’s great football teams.

They shut out seven opponents. They won a playoff game, 64-0, back when you had to finish at least third to get in the playoffs. The way they see it they were a few inches, disputed inches, from a state title.

By statistical measures, the 1995 Hornets (12-1) were as dominant as anyone has ever been. They finished third in the state for all classifications in scoring (38.92 points per game) and combined that with a defense (5.46 points allowed per game) that ranked fourth in the state in the final stats.

The 1995 Hornets walloped the two weak teams in their eight-team 2A Yadkin Valley Conference, smashing Mount Pleasant, 55-0, and North Stanly, 75-0. Salisbury also registered a 64-0 non-conference win against Davie County that helped their stats.

The YVC was quite strong in 1995 and was not a league conducive to blowouts. Defending league champ Albemarle and preseason favorite West Rowan were brimming with athletes. North Rowan and West Montgomery were very good. The 1995 season also was a stout one for West Stanly, which went 5-2 in the YVC and gave the Hornets a fight in a sea of rain and mud.

With returning players such as Desmond Adams, Andre Turner, Calvin Everhart and Demond Williams, the Hornets were picked to move up to third place in 1995 in the YVC preseason poll of league coaches published in the North Carolina Football News. Green had 22 seniors in uniform, but no one really had any idea what sort of storm was coming.

After three games, the Hornets were 3-0, with shutouts of Lexington, Davie and East Rowan.

Defensive coordinator John Mackey’s crew came together quickly. The Hornets used quite a few players both ways. Adams, a star running back, would also make all-county at defensive back. Williams would make all-county as both a tight end and defensive lineman. Turner, the other standout running back, played outside linebacker on defense. Just seeing the 6-foot-3, 205-pound Turner on one side of the Salisbury defense would make teams run the other way. That helped sophomore Scottie Everhart, outside linebacker on the opposite side, pile up tackles.

Scottie Everhart was the youngest of a trio of brothers, There was quarterback Priest Everhart, triggerman for a devastating offense, and Calvin Everhart, the free safety, who would turn in what may have been the greatest defense/special teams seasons in county history.

YVC play opened for the Hornets with the back-to-back tests of North Rowan and West Rowan. The Hornets stopped the Cavaliers, 28-6, and outscored the Falcons, 36-20, to prove they were for real. West’s 20 would be the most points the Hornets would allow all season.

After Salisbury mauled Albemarle, 48-7, and crushed West Montgomery, 35-0, the Hornets were surging upward in the state polls.

Salisbury threw just one pass against West Rowan and two against Albemarle. The season high for completions in a game for Priest Everhart was three, but the Hornets didn’t need to throw. Adams and Turner were pulverizing opponents on the ground. Turner had 187 rushing yards against West Montgomery. Adams had five 100-yard games during the regular season.

In the final game of the regular season, with weather and the fired-up West Stanly Colts providing the first challenge in weeks, the Hornets survived  Adams broke the run that decided it, 21-14. Adams also had a touchdown on the opening kickoff, his sixth return TD in two seasons.

The 10-0 regular season was the first ever recorded by Salisbury. The Hornets’ were leading the state in points differential. Their defense was No. 1 in the state for all classifications at that point, while the offense was No. 2 in the state.

Salisbury was ranked third in the Charlotte Observer’s Sweet 16 poll, fifth in the N.C. Prep Football News poll, and fourth in the 2A state poll.

Most important, they were in the state playoffs for the first time since 1990.

Salisbury’s first-round playoff opponent Randleman was a third-place team, having finished behind Thomasville and Ledford in its league.

It was expected to be a decent game, but Salisbury made it a 64-0 rout for its first playoff victory since 1988. Adams, who would win the 100 meters in the 2A state championships in the spring of 1996, had 195 yards on 12 carries and scored three touchdowns. Turner turned just 11 carries into 204 rushing yards and four scores.

The third-round road game at Thomasville’s Cushwa Stadium promised to be a legendary scrap between similar teams that hung their helmets on running the ball and playing relentless defense. Thomasville was ranked No. 1 in the 2A poll and undefeated.

As Salisbury QB Priest Everhart told the Post, “Thomasville is like us, not too big and not too small. Just right …. and quick.”

Only one pass was completed by the Bulldogs. Salisbury put in the air six times, with no completions and two interceptions.

Scottie Everhart intercepted a pass for the Hornets. Terry Lark had two sacks.

Thomasville led 14-6 when the Hornets launched a fourth-quarter drive that yielded first-and-goal at the Thomasville 7 with four minutes left on the clock.

Three plays later, it was fourth-and-goal at the 3, with the game and the season on the line. Thomasville expected Turner on fourth down, and Turner is what the Bulldogs got.

Coach Green explained to the Post in the aftermath that Thomasville’s speed had rendered going outside “null and void,” so inside was the best option. He put the ball in the hands of his big back and hoped Turner could get 3 yards.

Stephen Lindsay, a DB headed to the Shrine Bowl, made the stop near the goal line. Turner was oh-so-close to getting in. The ruling was he was inches short.

Salisbury still would’ve needed a two-point conversion, just to get even, but maybe it would’ve happened. Maybe history would’ve been written differently.

“We played against the No. 1 team on their field and we put ourselves in position to win it,” Green told the Post. “We didn’t blow it. We were here.”

Thomasville beat Mooresville in the fourth round, 10-0, and went on to win the state championship, throttling Clinton 16-0 in the 2A title game for a 16-0 season.

To this day, Thomasville players will tell you that Salisbury was the best team the Bulldogs faced that season.

Green was named Rowan County Coach of the Year.

Turner, who rushed for 1,193 yards and 25 touchdowns got the nod for Rowan County Offensive Player of the Year over Adams, who had 1,353 rushing yards and 23 TDs.

County defensive player of the year was an easier call. Calvin Everhart was a unanimous pick by the Post’s staff and the county’s coaches. He had 11 interceptions, with two pick-sixes. He had an 85-yard fumble return TD. He blocked five punts. He fell on one of those blocked punts for a touchdown, returned one for a touchdown and had another one returned for a touchdown by a teammate.

The N.C. Prep Football News named Green the 2A Coach of the Year.

There’s a fine line between success and struggle. With a roster hit hard by graduation, the Hornets went 2-8 in 1996 against a schedule where everyone was eager for payback.

From 1997-99, the Hornets would win a grand total of two ballgames. They wouldn’t experience another winning season until 2003.

But for one special fall in 1995 they were as good as anyone has ever been. No one will ever be able to take that away.