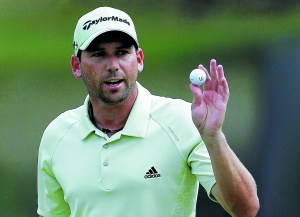 JACKSON, Miss. (AP) — Sergio Garcia delivered two key shots on the back nine, the last one an 8-iron to 30 inches on the final hole for birdie and a one-shot victory Sunday in the Sanderson Farms Championship.
Garcia closed with a 5-under 67 and won for the 10th consecutive year worldwide, and the first time on the PGA Tour since the 2017 Masters.
Peter Malnati, whose lone PGA Tour victory came at this tournament five years ago, closed with a career-best 63 and waited nearly two hours to see if it would hold up.
It almost did.
Garcia was two shots behind when he hit 5-wood on the par-5 14th that narrowly cleared a bunker, hitting in the top collar, onto the fringe and rolling out to just inside 4 feet for eagle to tie for the lead.
He had to save par from a bunker with a 5-foot putt on the 15th after a poor tee shot, and then he delivered the winner with a big tee shot on the 18th and an 8-iron from 171 yards. Garcia immediately began walking after the shot, and it dropped down next to the hole and settled right behind it.
Closing his eyes right before the stroke, a habit he returned to this week, he made it and clenched his fist with a grin not seen on the 40-year-old Spaniard lately.
One week after falling out of the top 50 in the world for the first time since 2011, Garcia won for the 11th time on the PGA Tour and the 31st time worldwide. He finished at 19-under 269.
LPGA TOUR
GALLOWAY, N.J. (AP) — Mel Reid of England seized control with a run of birdies around the turn and finished strong Sunday for a 4-under 67 and a two-shot victory in the ShopRite LPGA Classic for her first LPGA Tour title.
Reid’s only mistake on the back nine was a bogey on the par-3 17th, which cut her four-shot lead in half when Jennifer Kupcho and Jennifer Song each made birdie.
From the right rough on the par-5 closing hole, Reid lashed a 6-iron knowing that short of the green would be fine with a two-shot lead and the other two players also in the rough. The ball came out hot and ran onto the edge of the green, effectively assuring victory.
In her last start two weeks ago, Reid lost a two-shot lead in the Cambia Portland Classic. When she rapped in her 2-foot birdie putt on Sunday, she dropped her putter and the celebration was on. She was showered with a combination of beer and champagne, eventually grabbed a bottle of bubbly and took a swig.
Kupcho, the former NCAA champion at Wake Forest who last year won the inaugural Augusta National Women’s Amateur, closed with two birdies for a 68 to finish alone in second. Song had a 69 and finished alone in third.
EUROPEAN TOUR
NORTH BERWICK, Scotland (AP) — Aaron Rai of England closed with a 7-under 64 and then won the Scottish Open on the first playoff hole when Tommy Fleetwood missed a 3-foot par putt.
Rai won for the second time on the European Tour, and it comes one week after he lost a 54-hole lead and was runner-up in the Irish Open. He moves into the top five in the Race to Dubai.
Fleetwood holed a 20-foot birdie putt on the 18th at The Renaissance Club for a 67 to force a playoff at 11-under 273. Rai was in a fairway bunker off the tee and still managed par. Fleetwood took three putts from just off the green.
Robert Rock, who began the final round with a two-shot lead, had three birdies over four holes on the back nine and was tied for the lead until a bogey on the final hole for a 70. He finished alone in third, one shot out of the playoff.
Marc Warren (66) and Lucas Herbert (65) tied for fourth, while Ian Poulter closed with a 70 to tie for fifth.
KORN FERRY TOUR
SAVANNAH, Ga. (AP) — Evan Harmeling made a 10-foot birdie putt on the last hole for a 3-under 69, and then made birdie on the first playoff hole to beat Kevin Dougherty and win the Savannah Golf Championship for his first Korn Ferry Tour victory.
Harmeling had a one-shot lead going into the final round but was passed by Doughtery, who had six birdies in 15 holes for a two-shot lead. Dougherty dropped a shot on the par-3 17th, and Harmeling forced the playoff with his birdie on the par-5 18th. Doughtery missed his birdie putt for the win and closed with a 68.
Dougherty drove into a fairway bunker on the playoff and had to lay up, two-putting from 25 feet for par. Harmeling converted another 10-foot birdie putt for the win.
Harmeling, who won in Jamaica last year on the PGA Tour Latinoamerica, moved to No. 32 on the Korn Ferry Tour points list in his rookie season. He is the 16th first-time winner this year.
OTHER TOURS
Peiyun Chien of Taiwan was declared the winner Sunday when the final round of the Symetra Classic was washed out from nearly 2 inches of rain at LPGA International at Daytona Beach, Florida. Chien was at 14-under 202 and had a one-shot lead over Lucy Li. She won for the second time this year on the Symetra Tour and moved to No. 8 on the money list. … Hurly Long closed with a 2-under 70 and won the Italian Challenge Open with a birdie on the second playoff hole for his first Challenge Tour victory. Long defeated Matt Ford (68), while Marcel Schneider (67) was eliminated on the first extra hole. … Daniel van Tonder closed with a 6-under 66 for a four-shot victory Friday in the Vodacom Championship Unloaded. It was his second victory in three starts on the Sunshine Tour, and his ninth consecutive top 10.