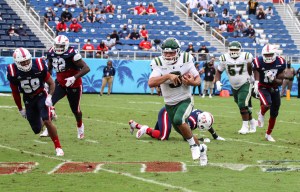 In the Conference USA opener at defending league champion Florida Atlantic, Charlotte led 10-0 at the half and after yielding 21 straight points rallied to close to within four, 21-17, before its final, potential game-winning drive was stopped at the FAU nine-yard line.

Charlotte put up 396 yards of total offense at FAU, compared to 315 for the Owls.

Reynolds’ 314-yard passing performance was the third 300-yard game of his career. Only Matt Johnson (4) has more.

Victor Tucker had a team-best nine catches for 118 yards, including a 48-yard reception that put Charlotte in the red zone in the final minute as the 49ers fought for a possible game-winning TD.

Tucker recorded the ninth 100-yard receiving game of his career.  Only Austin Duke (13) has more.

NIU transfer Tre Harbison III, the team’s leading rusher in his first two games, rushed for a TD for the 2nd straight game

DE Romeo McKnight, a transfer from Illinois State making his first start for the 49ers in place of Markees Watts, led Charlotte with 10 tackles and 2.0 TFL.

Opponents have yet to return a Jonathan Cruz kickoff. All nine kickoffs have been touchbacks.

Charlotte, which has yet to play a home game, travels to North Texas to take on the Mean Green, Saturday at 8 p.m. (ESPNU)

Charlotte scored a dramatic come-from-behind 39-38 victory over North Texas, last year, in the teams’ lone meeting. Charlotte trailed by 14, 35-21, heading into the fourth quarter but outscored North Texas 18-3 in the final frame. Chris Reynolds found Victor Tucker in the endzone on a 34-yard TD pass with 18 seconds left to give Charlotte the win.