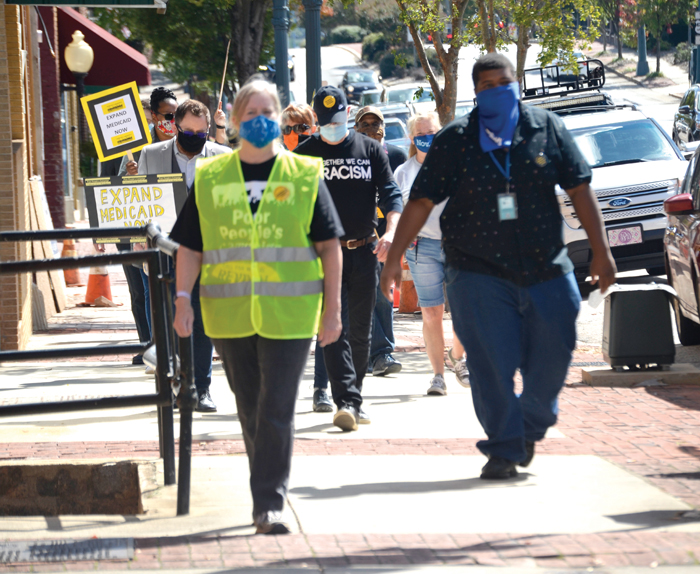 During a gathering of the Poor People’s Campaign a group of members and supporters marched through downtown Salisbury to bring awareness about Medicaid expansion. Shavonne Potts/Salisbury Post

But the unemployed pastor now says it’s been five years since he had health insurance.

Roseman and his wife have three children and were told they need to make less than $600 a month to qualify for Medicaid. Roseman’s family makes too much money to get assistance under the Affordable Care Act. And Roseman was just one person who spoke Saturday during an event hosted by the Salisbury Circle of the Poor People’s Campaign to bring awareness to Medicaid expansion.

He talked about facing a difficult choice during a battle with severe asthma.

“Do I eat or do I breathe?” he told a small group of participants in the event.

His only option was a free and reduced prescription. 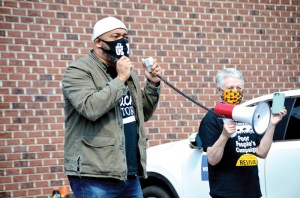 “That was my only option — eat, breathe or hopefully get free medication from the manufacturer,” he said. “It’s unjust, that is a travesty in the richest nation in the world.”

On Saturday, Mary Walker, a member of the local Poor People’s Campaign group, explained the agenda of the national group, led by the Rev. Dr. William Barber II and the Rev. Liz Theoharis along with a coalition of individuals, groups and organizations from around the country. The group seeks to bring awareness to issues of systemic racism, poverty, inequality, ecological devastation, the war economy and militarism and other social issues.

If North Carolina would expand Medicaid, Walker said, health care would be available to millions of people who are being denied. To date, just 12 states, including North Carolina, have chosen not to expand Medicaid to people who fall in the current coverage gap — they can’t afford health insurance on their own but make to much to qualify for Medicaid.

“It’s not a privilege, it’s a right,” she told the crowd.

She led the group in a short chant shouting, “No justice without health justice.”

Monica Gibbs, director of outreach for the Scott Huffman campaign, spoke briefly about her experience trying to provide health care for her children. Gibbs is a mother of five, with her oldest being self-sufficient.

Gibbs said her daughter, 22, lives off-campus at her college and, therefore, doesn’t qualify for school-issued healthcare. She wants to be a part of change in the community and state, but also prays that she doesn’t get sick.

“We’re glad that you are willing to be a part of a powerful movement that is occurring all over this country,” Pastor Anthony Smith told the crowd. 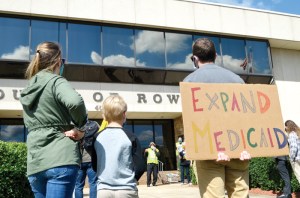 Robert Johnson holds a homemade sign as he stands with his family during the Poor People’s Campaign march to bring awareness to Medicaid expansion. The group marched from the county office building on North Main Street through downtown Salisbury. Shavonne Potts/Salisbury Post

Smith, who also works in health and human services, said he receives regular calls from people who need help with Medicaid. And he says people frequently ask him whether to purchase medicine or food.

“It feels like we are in a moment of darkness. It feels like the powers that lack empathy for the poor and uninsured and those who have low wages,” Smith said. “We may be small in number right now but we all are connected to somebody who is suffering in this state right now. Imagine if all of us would come together on this issue.”

Smith said the Poor People’s Campaign is committed to nonpartisan work and does not endorse candidates “because the center of the movement is the voices and the lives of people who are impacted by injustice — poor, uninsured, immigrants — they are the ones we center in this and not political candidates. We’re asking candidates to endorse this movement and what it stands for.”

It’s not simply an economic issue, he said. It’s a moral issue.

“This state has the ability to make sure that people are fully insured, that Medicaid expanded because people are suffering and that issue does not belong political candidates but they are there to ensure the health and welfare of our community,” Smith said.