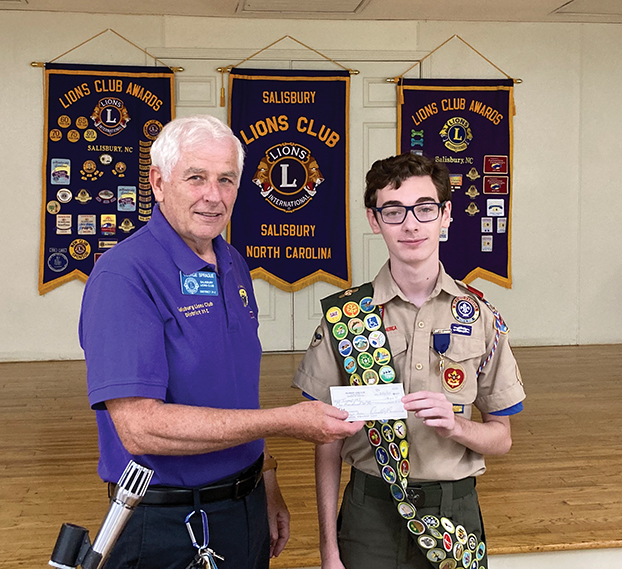 The Salisbury Lions Club marked its 88th anniversary this past week with the annual Charter Day Celebration.

The local club was founded in September of 1932. Bob Loeblein, past district governor and a 63-year member, presented a brief history of the Lions, including how it was founded in 1917 by Melvin Jones.

President Rik Spencer presented the following recognitions to deserving members: William L. Woolard Partner in Service Award to Nellie Troxell. Past President and Sid Scruggs Fellow to Mike Edwards. North Carolina Lion Ambassador to Greer Goodman. Each of these individuals have dedicated themselves to longstanding service to blind and visually impaired citizens.

In addition, the Lions welcomed a special guest, Layton Barber, who made a presentation. The Eagle Scout candidate is part of Troop 443 and for his Eagle project, Barber has been raising funds to purchase four American flags, which will include inscriptions with the pledge of allegiance in English and in Braille. These flags will be contributed to the four veterans homes in North Carolina.

The club’s contribution, presented by First Vice President George Sprague put Barber over the top for his goal on this project.

Trump said to be improving but next 48 hours…