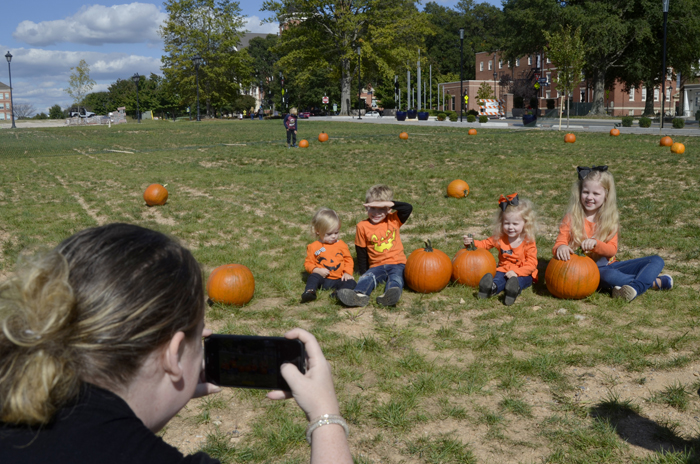 KANNAPOLIS — By this time, Emily and Jeff Mabrito normally would have already participated in fall activities with their four children, but because of COVID-19 Saturday was their first festivity.

The Mabritos were some of the many who attended a family-friendly Oktoberfest event held at the Atrium Health Ballpark in downtown Kannapolis. Hundreds gathered for pumpkin painting, food and craft vendors and beer.

“I always like to get them dressed up,” Emily said. 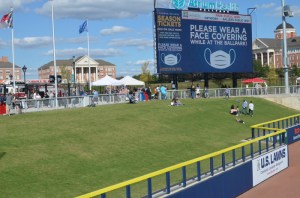 Many families gathered Saturday at the Oktober Fest event held at the Atrium Health Ballpark in downtown Kannapolis. The family-friendly event featured a pumpkin patch and pumpkin painting as well as food/craft vendors and beer. Shavonne Potts/Salisbury Post

She said the family tries to go to as many fall events as they can. On Saturday, Emily and Jeff let the children — Alivia Grace, Harrison, Emilia and Savannah — pick out pumpkins from the pumpkin patch.

Once the pumpkins were chosen, Emily carefully placed the children around their pumpkins and snapped a few quick photos they planned to share with Jeff’s family in Texas.

Jeff said he most looked forward to the sausages and craft beer and watching the children pick and paint pumpkins.

Shelby Austin and her husband, Kevin, and their two children, Reid and Wiles, made a lap around the stadium to take it all in and then darted back to the pumpkin patch.

Shelby said she is a “baseball mom.” So, she bought baseball earrings from one vendor and a handmade ceramic mug from another. She planned to drink her Sunday morning cup of coffee from the new mug on the family’s back porch.

“It’s a beautiful day,” Shelby said, noting it was the family’s first time at the new ballpark.

Judy “Sunshine” Suddeth and her husband, Steven, are regulars to the ballpark. Judy said they usually like to walk around the concourse. Her husband likes to get a beer. On Saturday, they brought their nephew, Parker Guy.

Christy Medlin and her son, Caden, decided to get out of the house on Saturday, too, and spend the day at the ballpark with some friends. Christy said they are homebodies and Saturday was one of the first events they’ve attended since the beginning of the pandemic.

They brought their dog, Ace, and stopped at a local food truck. Both said they felt uncomfortable with the crowds of people in the ballpark and decided it was less congested closer to the food trucks. They sat down on a retaining wall and enjoyed some buffalo chicken sandwiches.

“It’s great for Ace. He’s well-trained. It’s a pretty day to walk around and get exercise,” Christy said. 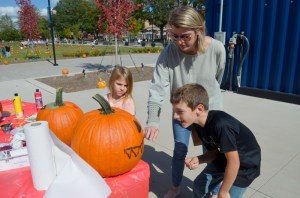 Shelby Austin takes a look at a pumpkin painted by her son, Reid, as daughter Wiles, takes a look. The family, including husband, Kevin, spent the day at the Oktober Fest event held Saturday at the Atrium Health Ballpark. Shavonne Potts/Salisbury Post