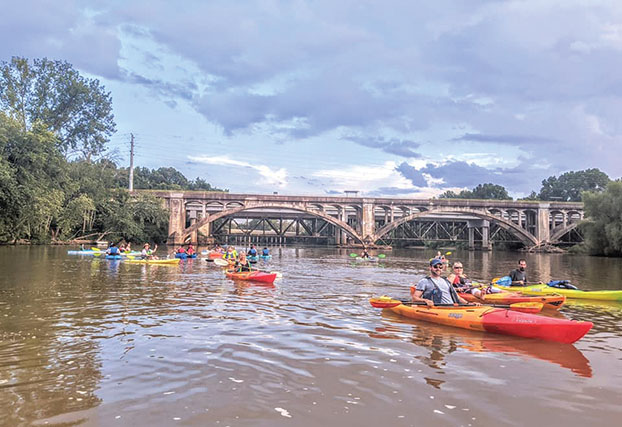 Kayaking on the Yadkin has continued to see an uptick in popularity recently, which is exciting for Nancy and Stpehen Black, who created their company to meet that demand. Photo submitted.

SALISBURY — Those who say businesses shouldn’t be created out of necessity haven’t talked to Nancy or Stephen Black.

Nancy and Stephen, both Salisbury natives, have been avid kayakers for over a decade and have traversed the south Yadkin River by paddle hundreds of times. During their many trips up and down the waterways, the couple had grown used to not bumping into other people.

“We started kayaking in Rowan County probably about 12, 13 years ago,” Nancy said. “We never really saw a lot of other people out there, especially on the south Yadkin.”

That changed recently, when more and more locals began expressing their interest in getting into a kayak and getting out on the water.

“This year, we actually had several friends that reached out because they wanted to buy kayaks and couldn’t and they just kind of wanted to get more into it,” Nancy said “It’s something to do outside safely during COVID.”

The Blacks decided to put their unique knowledge of both kayaking and the Yadkin River to work. In July, the couple started Row Co River Adventures, one of the only companies in the area that offers kayaking rentals, guided paddles and shuttle services.

“This company was kind of born more out of necessity than anything because we had so many people that knew that we did it and wanted to get more into it,” Nancy said.

Before Nancy, a stay-at-home mom, and Stephen, who works for Freightliner, could take groups out on the water, they first had to amass an armada — a process that Nancy expected to be easy. But with kayak supplies low, finding enough boats posed a problem.

“We had originally talked to a distributor about getting a whole fleet of Old Town kayaks, and we had it all set up for them to be delivered and start right in July,” Nancy said. “And then they basically told us that it would be the end of September before we got them.”

The Blacks didn’t have until September.

To supply the vessels they needed, they turned to an unlikely source: Facebook marketplace. The Blacks furnished their fleet by buying kayaks directly from locals, putting together a mismatched group of vessels that has actually become an advantage.

“It has worked out really well because we’ve been able to have a very diverse fleet,” Nancy said. “We have three fishing kayaks, three tandems and about 10 singles of all different styles.”

The Blacks were finally able to score several new kayaks, but most of their fleet came from the secondary market. 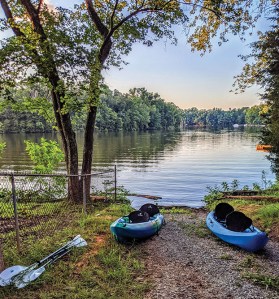 Row Co River Adventures sourced some of the kayaks in their fleet from Facebook marketplace since the demand for kayaks had created a shortage. Photo submitted.

Since beginning operations in July, Nancy has seen the newfound demand for kayaking continue. Row Co River Adventures’ has sold out of kayak rentals for at least five weekends, Nancy said. While some of the company’s new clientele are experienced kayakers, many customers are novices.

For new kayakers, it’s critical to have an experienced and knowledgeable guide like Nancy and Stephen, Yadkin Riverkeeper Executive Director Edgar Miller said.

“We’re glad to see the river getting more use, but we also have the challenge of making sure people are safe and that they are aware of the risks and that’s why it’s preferable, particularly for beginning folks, to work through an outfitter like the River Adventures folks,” Miller said.

Since Nancy and Stephen began kayaking, they’ve learned the ins and outs of the Yadkin, memorizing the best access points and the ideal spots to stop for lunch or a quick swim. They also keep up with the water levels to ensure that it’s safe for their customers to go out for a paddle.

Their intimate knowledge of the terrain has been one of the major factors in the businesses’ success so far.

“We have specific landmarks that we show people so that they know the few places that you can get out and I’ll kind of gauge it with our guests. I ask them ‘What are you looking for? If you’re looking to swim and do all those things, let’s take you down to Tuckertown. But if you want a nice long paddle where you have more of a river flow, then the Yadkin is perfect for you.’ ” 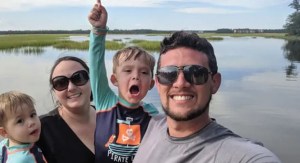 Row Co River Adventures is a family affair for Nancy and Stephen, who have served as the main guides for paddles. Photo submitted.

Nancy said that she hopes their business can continue to grow kayaking in the area one paddle at a time. Row Co River Adventures will take a group out for a moonlit paddle on Friday and plans on hosting Halloween-themed paddles throughout October.

More information about Rowan County River Adventures can be found at rowcoriveradventures.com or by calling 704-870-8362. For more information on river access and water levels, visit yadkinriverkeeper.org.