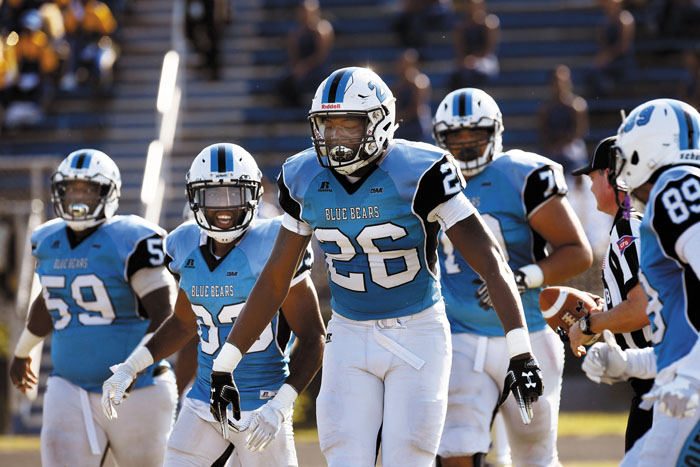 SALISBURY — The Central Intercollegiate Athletic Association, which includes Livingstone College, won’t have any sort of football season this school year.

Not even the condensed version that the South Atlantic Conference, which includes Catawba, still hopes to have.

“This is a very challenging time,” Livingstone AD Lamonte Massie-Sampson said. “But our student-athletes will be highly engaged within their programs, focused on academics and preparing for the next phase in their sport. Our top priority is their health and well-being.”

Livingstone’s football season would have been the first under the leadership of former NFL standout Sean Gilbert. Gilbert was announced as the Blue Bears’ new head coach in January.

Gilbert plans to use this time to focus on strength and conditioning and to build relationships with the players.

Livingstone has a roster of 84. No student-athletes will lose their scholarships for this academic year.

Also canceled for the 2020-21 school year are CIAA men’s and women’s cross country.

“This difficult decision was made with the best interest of our student-athletes, coaches and staff in mind,” Massie-Sampson said. “There are so many unknowns as it relates to this pandemic, so it behooves us to be proactive in every approach to resuming sports. We feel very comfortable with and fully support the decision made by our conference.”

Volleyball, normally played in the fall, has not been canceled and is moving forward with plans for a spring season.

The CIAA also announced a start date for men’s and women’s basketball, although it’s not nearly as optimistic as the Nov. 21 start planned by the SAC.

Condensed CIAA men’s and women’s basketball seasons are scheduled to begin on Jan. 9.

“Delaying the start of our winter seasons acts in the best interest of our student-athletes, coaches, and support staff as it ensures proper re-socialization for all parties while affording our membership the opportunity to implement recommended health and safety measures prior to competition,” CIAA Commissioner Jacqie McWilliams said. “Although unfortunate and unprecedented circumstances this year will prohibit athletic seasons for some, we remain committed to bolstering opportunities that amplify the experiences of our student-athletes, member institutions, partners and fans.”

Men’s and women’s basketball will feature a 16-game conference schedule.

CIAA schools are permitted to play up to six non-conference opponents. All teams will adhere to a uniform COVID-19 testing and reporting policy prior to each contest.

At this time, the CIAA plans to proceed with spring sports as scheduled, but the league will continue to monitor any changes in legislation that could impact those plans.

An update on CIAA championships for spring and winter seasons, events such as the CIAA basketball tournament, will be provided at a later date.

Indoor track and field and women’s bowling have not been canceled. Potential start dates are under review.