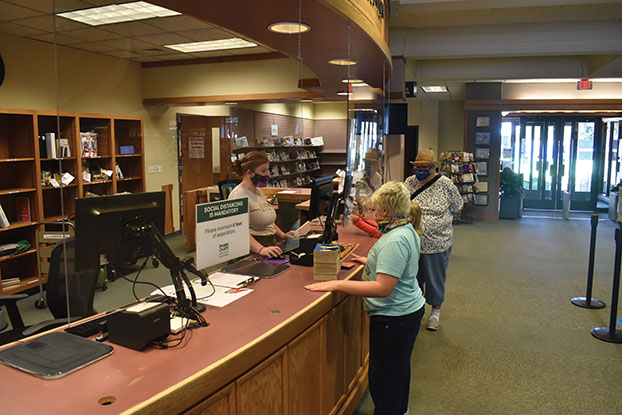 A librarian checks out a stack of books for Newt Hopkins-Teeter from behind a plastic barrier at the Rowan Public Library on Thursday. Ben Stansell/Salisbury Post

SALISBURY — Newt Hopkins-Teeter was searching for a good book, or several.

Along with his sister and grandmother, Newt was one of many patrons who visited the Rowan Public Library on West Fisher Street on Thursday, the first day that the library system opened its doors to the public for several months. Along with the main building in downtown Salisbury, the east and south branches of the library opened as well.

“I’m glad the library is opening up again so I can borrow books for them without having to buy them,” said Newt’s grandmother Sharon Dyar-Hopkins said.

Rowan Public Library Director Melissa Oleen was standing at the building’s door to greet people when the library reopened and was excited to see what it meant to patrons to be able to come back into the building.

“I think in the first hour we had about 15 people to come in and I would say about half of those, when they walked in, they paused and they just kind of looked around and took a deep breath,” Oleen said. “Then they made a comment like, ‘Oh, it’s good to be back,’ or ‘Oh, it’s great to be back in side.’”

Oleen said she might have even seen a tear or two in the eyes of some people who walked in.

In total, Oleen said that over 600 guests visited a Rowan Public Library branch on its first day back open. Those visits were spread out, with about 65 people visiting one of the libraries per hour.

During the time that Rowan Public Library’s doors were closed to the public, staff members still worked to accommodate patrons by offering curbside pickup, virtual programming and free Wi-Fi on library grounds and parking lots. Those same services will still be offered to people who are not yet comfortable entering the library’s doors.

“We still have our full complement of curbside services,” Oleen said. “People are able to make the choice that they want, whether they want to come in, or if they’re not comfortable with that, they can still access everything outside of our walls.”

The experience of wandering through bookshelves and perusing titles is similar to what it was in the past, but the library has implemented several measures to promote safety. Hand sanitizer stations have been installed at various points throughout the building, plastic barriers separate librarians from people checking out books and the occupancy of tables and seating spaces has been reduced.

The library’s operating hours are currently from 9 a.m. – 6 p.m. on Monday through Friday and 9 a.m. – 1 p.m. on Saturday. Oleen said that they hope to return to normal hours by November.

More information about Rowan Public Library can be found at www.rowancountync.gov/307/library.