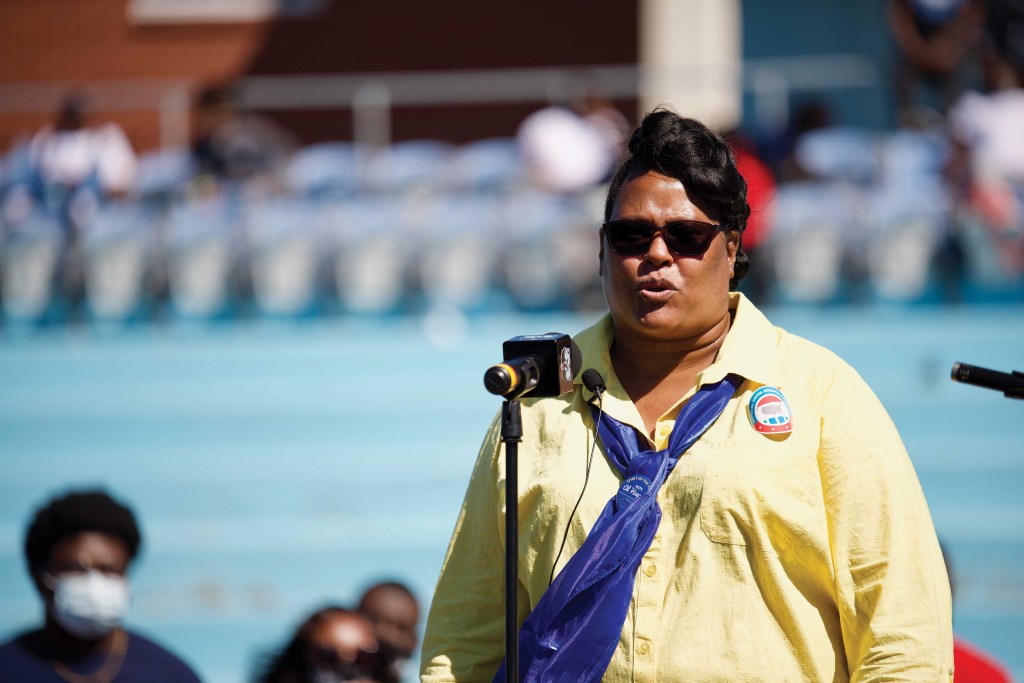 Carl Blankenship/Salisbury Post - Mayor Pro Tem Al Heggins spoke to the crowd about her campaign for a state House seat and told the crowd they are the change.

SALISBURY — Livingstone College on Wednesday held a rally to implore students to get out and vote.

Sanborn, a retired RSS administrator who is competing against former East Rowan High School head baseball coach Brian Hightower for the East area seat, said she wants to meet the needs of all students regardless of where they live, ability or socioeconomic status.

Byrd-Clark said she is seeking reelection because she is committed to students in the district. 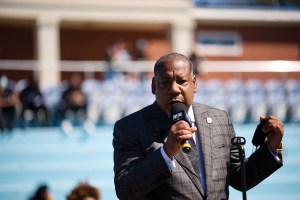 Carl Blankenship/Salisbury Post – Livingstone Chief Operating Officer Anthony Davis speaking to the crowd. Davis said the college is nonpartisan, but that does not mean it is deaf or blind.

The crowd also heard from local leaders. Salisbury-Rowan NAACP President Gemale Black spoke to the crowd about the organization. Black said the NAACP has fought for policies that allow students to be where they are today.

Black said the NAACP is nonpartisan and challenges who it needs to, but he described the presidential debate on Tuesday as a show that looked like a cartoon to him. If students do not go out and vote, U.S. democracy will not last another four years under the current administration, Black said.

“We know what time it is,” Black said.

Huffman, a Navy veteran, small business owner and I.T. professional, is competing with Republican incumbent Ted Budd for the state’s 13th congressional seat. Huffman said he could not stand in front of the students and ask for their votes if he is not willing to stand with them.

“I have stood in Salisbury to help take down “Fame,” Huffman said. “I have walked up in Lexington when they have oppressed Black lives because I’ll tell you this right now: Black lives matter.”

Huffman said the students are powerful because they have the right to vote.

“And guess what?” Huffman said. “They want to take it away from you.”

Huffman criticized President Donald Trump for his debate performance and his comment that a white supremacist group to “stand by.”

Ellis described herself as a mom and regular working person who is running against Republican incumbent Carl Ford.

“I can tell you that he is not interested in representing you,” Ellis said.

“We are going to be getting out the vote,” Heggins said. “We are tired. We are tired of Black women, Black men killed in the streets. We are tired about state-sanctioned violence against Black and brown bodies.

Heggins said it can be hard for Black candidates to talk about Black issues because they get put in a box.

It is time to do and let people know change is here, she said.

“You are the change,” Heggins said.

Livingstone Chief Operating Officer Anthony Davis told the crowd the election is critical, though he did not tell students who to vote for because the college is nonpartisan.

“Nonpartisan means we’re not blind and we’re not deaf. We see what’s going on,” Davis said. “We see that four years ago you said that it wasn’t fair to appoint a Supreme Court justice in the middle of an election year, and you denied an African-American president the right to exercise his constitutional duty to nominate a Supreme Court justice. And you wouldn’t even bring it to the floor. We’re not blind that in Louisville, Kentucky, that you can get time for putting bullets in sheetrock, but you can’t get indicted for putting bullets in a sister. We’re not blind.”

Davis told the Post the event was planned before the presidential debate was scheduled on Tuesday, but the debate the day before made the rally more powerful.

He said the college wants all of its students to register to vote and exercise the right in every election, including on-campus elections.