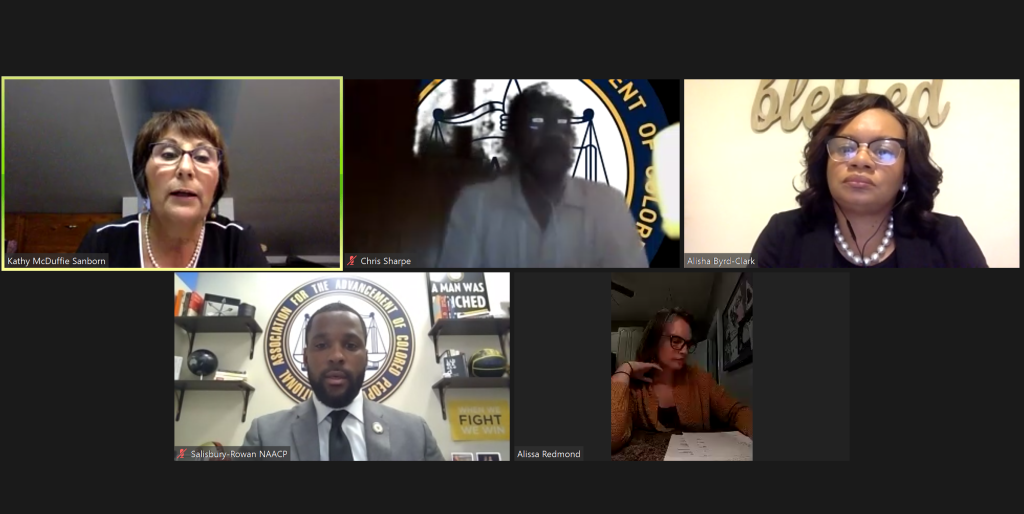 Kathy McDuffie Sanborn, Chris Sharpe, Alisha Byrd-Clark. Gemale Black and Alissa Redmond at the forum. Sanborn and Byrd-Clark spoke about their accomplishments working with the district and coming challenges they see.

Jennifer Studer and incumbent Susan Cox, who are both on the ballot for the southeast area seat, did not attend, but Cox has publicly conceded the race to Studer.

Chris Sharpe, of the Salisbury-Rowan NAACP, noted the organization is nonpartisan and the forum was a chance for people to hear from candidates. The races are nonpartisan as well.

Redmond had both candidates introduce themselves and then asked the pair what they see as their biggest accomplishments with the district and coming challenges.

Byrd-Clark immediately pointed to ensuring $26 million in funding to renovate Knox Middle School, though now the district is planning to create a new K-8 facility that would combine Knox with Overton Elementary School and be more expensive. She added that seeing the new K-8 facility through to completion is one of the reasons she is running for reelection.

“We have kicked the can so many years, and Knox has been one of the schools that has been overdue,” Byrd-Clark said. “And I want to make sure that comes to fruition for our kids and for our community.”

Byrd-Clark also said she wants to be part of renewal. Though it comes with challenges, Byrd-Clark said it puts the district in a position to do more for the community. She pointed to a couple challenges the district is facing, including eventually returning students to classrooms full-time and finding a new superintendent who is well suited for the district.

Current superintendent Lynn Moody will retire at the end of December and the board is beginning the search process for a replacement.

Sanborn pointed to her time as director of secondary education for the district, saying a goal when she came on board was to bring the high schools together to collaborate. Sanborn said over the course of a couple years the high school principals became collaborators and worked to improve each other’s schools.

She also helped create student advisory, a model that takes input from student leaders at each high school a few times a year to see what the students wanted to change. Sanborn said she is proud of listening to stakeholders to make the schools better.

Sanborn said it is time for a new leader who will take the district forward, and she noted renewal gives the district more freedom to make local decisions.

“How are we incorporating it?” Sanborn said. “Are we always making decisions that are best for our students as we are moving forward?”

Sanborn said the district should always look at using the freedoms to always do what is best for students and not what is easiest for adults.