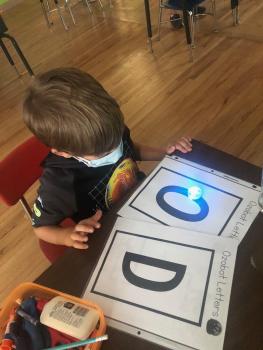 Photo submitted - A Rockwell Elementary kindergarten student coding an Ozobot to follow the paths of letters. 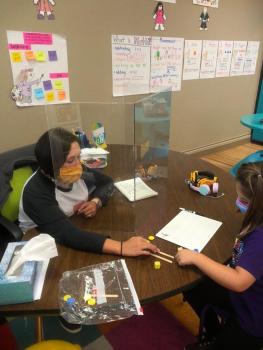 Kindergarten is the first school experience for many children, and this school year looks different from any before. The kindergarten team at Rockwell Elementary School is finding new ways to bring students into education.

Kindergarten teacher Kristin Eagle said she is glad to be back in the classroom, even though things are so different.

“We still operate as a family,” Eagle said. “We still talk to each other and really enjoy being together.”

Student Passions and Career Explorations teacher Kara Burnett said her job is to touch on what students are passionate about. She said the kids’ eyes light up when they get to work with Ozobots, a brand of small robots developed for education.

The robots can follow drawn paths. Last week, kindergarten students worked with the little machines to watch them trace handwriting so they could see what their hands would be doing to make the letters.

“This is their first go round at a public school, big school,” Burnett said. “It’s so important to touch those passions so they know that there is excitement in schools.”

Kindergarten teacher Kayla Jones said the school’s enhancement team coordinates with them to work things like Ozobots into teaching the curriculum.

Jones said students need to have phonics reinforced during time with the teacher, and working those standards into every part of the day helps.

Jones said it is critical for teachers to hit on fundamental standards because students need the stability and structure of school more than ever.

“We only get them for two days during in-person instruction, so it’s super important for us to make that really engaging, but also rigorous, and to make sure we are reaching them at a higher level than normal,” Jones said.

Principal Jennifer Warden said the team is a great example of moving away from crisis mode the district had been in since March to focus on delivering grade-level standards.

Warden said adding the enhancement team expands the number of people working with students on those standards .

The enhancement team is a direct product of the school’s renewal plan. Warden said it is a beautiful thing to see science and phonics merged into a lesson for kindergartners.

Jones said it is not necessarily as fun having students for only two days, but she is getting more time with students one-on-one. She is getting to know students better and they are progressing quickly. Her students can already read words, sound them out and write them.

“They were so excited that they could read a whole sentence,” Jones said.

The teachers have also been challenged to create ways to keep students socially distanced. An outdoor break time is built into each day, and teacher Macey Davis took her students outside to write letters in the sand recently.

Jones said the school is also using sand trays, effectively giving each student their own small sand box. They all have their own bag of math manipulatives as well, and Jones said the important part is the hands-on piece is still there for kindergarten students.

The teachers said some people are surprised by how much kindergartners can understand and retain.

“Every year I get comments: ‘I didn’t know letters made that sound, or I didn’t know they could write that early or read that early,’ ” kindergarten teacher Macey Davis said.

Kindergarten teacher Alicia Burrage added that she tells parents they will be amazed at what students leaving kindergarten will know by the end of the year.

“They surprise you every single time,” Burrage said.