SALISBURY — Police are looking for a man suspected of being involved in a shots fired incident at a Salisbury home.

Police say arrest warrants have been issued for Romello Christopher Ford, 24, of North Ellis Street, for carrying a concealed weapon, possession of a stolen firearm, possession of a firearm by a felon and aggravated misdemeanor possession. 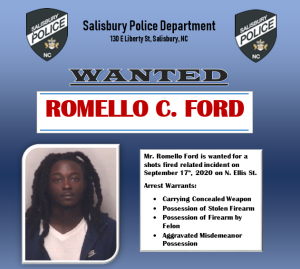 Police have created this poster to let the public know about charges Ford is facing.

Police were called to the 600 block of North Ellis Street on the night of Sept. 17 for a large fight that was in progress outside the home and after reports of people hearing gunshots. The crowd was still outside as the first officer arrived.

Two people, later identified as Ford and a Concord man, got out of a truck and walked into the home even after officers told them to stop.

Anyone with information on the whereabouts of Ford is asked to contact the Salisbury Police Department at 704-638-5333 or Salisbury-Rowan Crime Stoppers at 2-866-639-5245.