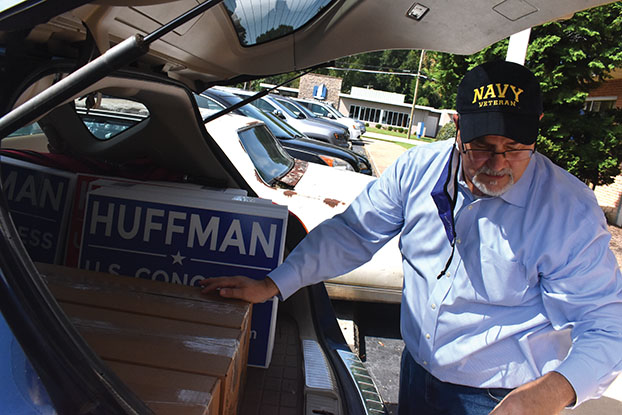 SALISBURY — The first time that Scott Huffman saw “Star Wars: Return of the Jedi,” he had a difficult time following the movie’s dialogue.

Although most of the people around him easily understood what was being said, Huffman couldn’t comprehend a word spoken by Luke Skywalker as he led an attack to foil the dark side’s plans for intergalactic conquest. That’s because Huffman wasn’t fluent in French.

Stationed in Toulon, France, at the time for the U.S. Navy, Huffman hadn’t yet seen the blockbuster film in American theaters before going overseas.

“I actually found out that there was a local theater in Toulon that was going to play the movie and I went and it was great, but it was all in French, so I couldn’t understand anything they were saying,” Huffman said, chuckling at the memory.

Closed captions were not available.

At the time Huffman watched the movie, he never could’ve predicted that Luke Skywalker himself — at least, the actor who played him — would become a vocal supporter decades later.

“I might be one of the only candidates in the country who is endorsed by Luke Skywalker,” said Huffman, who is currently running to unseat incumbent Republican Rep. Ted Budd for the 13th District’s congressional seat.

Huffman’s endorsement is actually from Mark Hamill, the actor famous for playing Skywalker as well as several other roles in movies and television. On Saturday, Huffman is combining forces with Hamill to host a virtual fundraising event where supporters can purchase tickets to hear the two talk about their passions.

“It’s going to be a lot of fun,” Huffman said. “We’ve had huge attention on this and we’re gonna have a great turnout. I mean, it’s Luke Skywalker, for goodness sakes. It’s the guy who helped defeat the dark side and we’re really honored that he’s recognized me as a candidate in North Carolina.”

Huffman and Hamill’s relationship started in late July, when Huffman received a notification that Mark Hamill had replied to one of his tweets. In his response, Hamill voiced his support for Huffman and said that he was the son of a Navy veteran. Hamill has long been an outspoken advocate for the Democratic Party and consistently utilizes his large social media following

Over the next several weeks, Huffman and Hamill talked back and forth several times via social media before eventually connecting personally.

Huffman said that the proceeds from the event will be split between his campaign and his instant impact program, an initiative he started on the campaign trail in which he gives campaign donations to local nonprofits that work to provide hunger relief. Huffman’s campaign manager Joshua Stack said that he’s also given donations to Gary Sinise Foundation, which supports injured veterans and their families.

“This is a fundraiser for our campaign to help win this race, but one thing we’re doing with the instant impact program is we’re helping out people who are struggling to put food on the table,” Huffman said.

Huffman said that he believes donations from their campaign have helped feed over 1,000 families.